The UN has called on the US to stop separating children from their parents at the frontier with Mexico. A spokeswoman has said, "Entering a country without the relevant papers should not be a criminal offense." 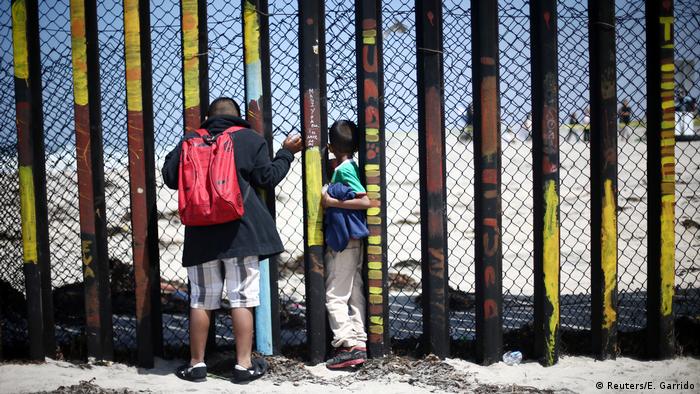 The UN human rights office said on Tuesday that several hundred children have been separated from parents who were jailed for entering the US illegally. It insisted there is "nothing normal about detaining children."

Ravina Shamdasani, spokeswoman for the Office of the High Commissioner for Human Rights (ONHCR), said that border control appears to take precedence over child protection and care in the US. "The use of immigration detention and family separation as a deterrent runs counter to human rights standards and principles," she said.

The US ambassador to the UN, Nikki Haley, hit back against the criticism, saying, "Neither the United Nations nor anyone else will dictate how the United States upholds its borders."

Without explicitly mentioning the UN, US President Donald Trump blamed the Democrats for family separations. "Separating families at the Border is the fault of bad legislation passed by the Democrats. Border Security laws should be changed but the Dems can't get their act together!" he wrote on Twitter.

Washington has adopted a "zero tolerance" approach to illegal border crossings, which has accelerated family separations. US protocol prohibits detaining children, who are not charged with a crime, with their parents, who are.

Most people crossing the US southern border are from Guatemala, Honduras and El Salvador, where there is rampant violence and persecution targeting children and youth, UNHCR spokesman William Spindler said. Thousands cross the US-Mexico border every week and immediately request asylum from authorities, citing violence in their home countries.

Although "improper entry" to the United States is a criminal offense, it should be "at most an administrative offense," said Shamdasani, who doesn't want anyone — children or adults — jailed for "illegal" migration. "The use of immigration detention and family separation as a deterrent runs counter to human rights standards and principles."

US President Donald Trump had promised during his election campaign to crack down on undocumented immigrants, whom he accused of bringing violent crime to the country and hurting the nation's economy. Trump introduced measures last year allowing agents from US Immigration and Customs Enforcement (ICE) to deport almost all undocumented immigrants anywhere in the United States.

The UN Human Rights Office said children should never be detained for reasons related to their own or their parents' migration status. It said the practice was a "serious violation" of the rights of children.