Donald Trump has offered new details on his immigration plan, telling supporters thousands will be deported if he takes office. He warned supporters that a vote for Hillary Clinton is a vote for open borders. 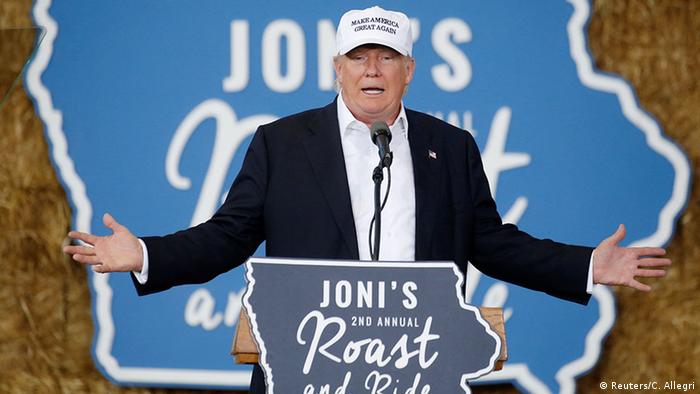 US Republican presidential candidate Donald Trump said Saturday that if elected his first priority would be to deport thousands of illegal immigrants who have committed crimes.

Adding new details of how he would tackle illegal immigration, Trump told supporters in the swing state that he would establish a tracking system to deport illegal immigrants who overstay, and set up an e-verify system to ensure they do not receive welfare or other benefits.

"If we don't enforce visa expiration dates, then we have an open border - it's as simple as that," he said.

Trump has so far provided few concrete plans on how he would deal with immigration, except for his idea to build a wall along the Mexican border. With only 72 days before the election, Trump has sought to expand beyond his core support base and attack his Democratic rival Hillary Clinton.

His comments in Iowa come after he came under criticism from conservatives by suggesting earlier this week that he would soften plans to deport 11 million illegal immigrants.

"Every time an African-American citizen, or any citizen, loses their job to an illegal immigrant, the rights of that American citizen have been violated," he said. "Equal protection under the law must include the consistent application of our immigration laws."

Trump has recently sought to court the African-American vote, a traditional bastion of the Democrats, by attacking Clinton on racial issues and arguing he will bring jobs and prosperity to black communities, unlike the Democrats.

The former deputy defense secretary said that he has "serious reservations" about Clinton, but that Trump is too reckless. He joins a growing chorus of prominent Republicans who oppose the party's standard bearer. (26.08.2016)

Police and demonstrators have clashed at a rally by Republican hopeful Donald Trump in San Diego. California is home to the largest Latino population in the USA. (28.05.2016)

There are growing calls in the Republican Party to end birthright citizenship for the children of undocumented migrants. The debate strikes at the very core of American nationhood. Spencer Kimball reports from Chicago. (26.08.2015)