Hundreds of migrants ford river from Guatemala to Mexico 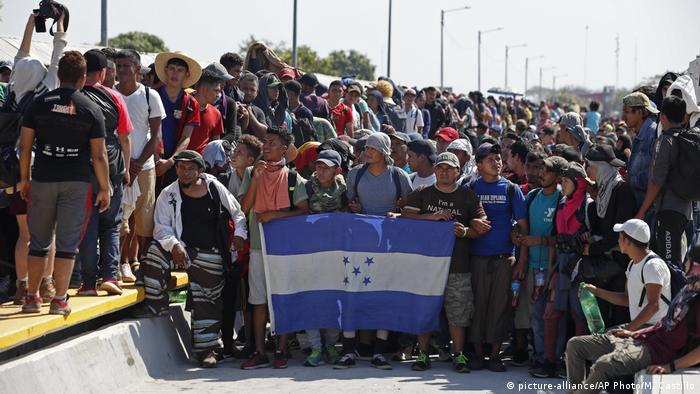 Hundreds of Central American migrants have waded across a river from Guatemala into southern Mexico, spurring clashes with security forces and prompting National Guard troops to fire tear gas.

The migrants, part of a larger group of around 3,500, gathered on the Guatemalan side of the Suchiate River, which divides the two countries, at dawn on Monday. They demanded that migration authorities allow them to continue their journey to the United States, presenting another challenge to Mexican President Andres Manuel Lopez Obrador and his efforts to curb migration at the request of the Trump administration. 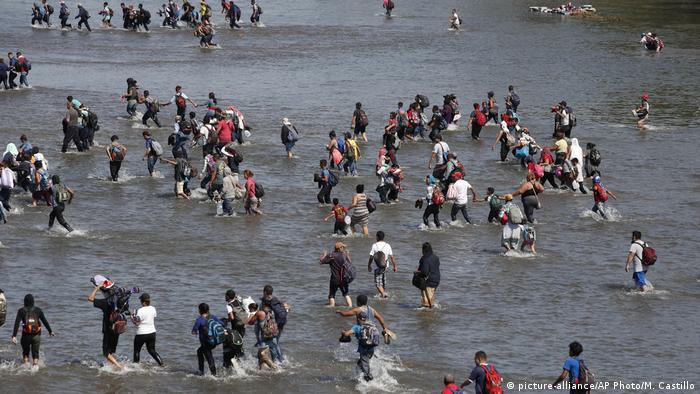 Migrants waded across the Suchiate River, shielding themselves from tear gas

The migrants later moved off the border bridge and toward the river, although officials told them they could not pass into the country.

People ran from side to side along the riverbank, kicking up dust and trying to move past the troops. Others, with shirts tied around their faces to protect them from the tear gas, also threw rocks at the guards.

Around 200 of the 2020 Caravan members made it across the river, after many failed and turned back when faced with tear gas and opposition. They were detained by Mexican authorities, and AFP news agency reported they were rounded up in vans.

At least 2,000 migrants had been camped in the Guatemalan border town of Tecun Uman, across from Ciudad Hidalgo on the Mexican side.

According to the Guatemalan government, at least 4,000 people have entered the country from Honduras since last Wednesday. The surge comes amid heavy pressure placed on Mexico by Washington to stem the flow of migration into the US. Last year, the Trump administration threatened to impose steep tariffs on Mexico if it did not do more to tackle the issue.

Earlier groups of migrants have been able to persuade authorities to allow them to make the border crossing, either on humanitarian grounds or through the use of force.

Mexico has agreed to allow some of the migrants to start jobs in the southern part of the country. However, only 1,000 took the offer due to widespread fears of deportation. It was unclear what kind of work the migrants might be offered.

"In the majority of cases, once the particular migration situation has been reviewed, assisted returns will be carried out to their countries of origin, assuming that their situation warrants it," Mexico's Interior Ministry said in a statement on Sunday, referring to the 1,000 migrants.

In October 2018, a caravan of more than 5,000 migrants tried to cross through the southern Mexico border, in an event which US President Donald Trump dubbed an "invasion."

The government has no strategy against drug cartels and society has come to expect escalating violence. There is no longer a line that separates terrorism and organized crime in Mexico, writes Anabel Hernandez. (15.11.2019)

US mass deportations would lead to 'tremendous human rights abuses'

Grace Meng from Human Rights Watch told DW that even though recent immigration raids in US cities weren't as extensive as planned, they still struck fear in migrant communities. She also criticized new US asylum policy. (15.07.2019)

Hundreds of migrants heading to the US stopped in Guatemala 16.01.2022