At least 18 killed, 16 injured in Honduras prison after gang fight

The government of Honduras has recently declared a state of emergency in its prisons due to violence between rival gangs. The military and police are set to take control from often corrupt civilian officials. 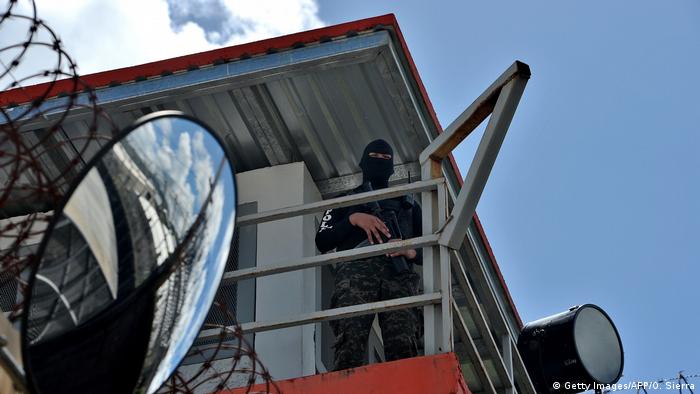 At least 18 people were killed and 16 injured in a brawl between rival gangs inside a prison in Honduras, authorities said late on Friday. The riot, one of the worst outbreaks of prison violence in the country, came just two days after the government had to declare a state of emergency in the prison system over the heavy increase in fighting.

The state of emergency means that civilian employees and security have been suspended for at least six months, transferring their duties to the country's security services. However, a military official told the Reuters news agency on condition of anonymity that a transfer of power had yet to take place at the prison in the northern port city of Tela.

Honduran authorities hope that police and military control of the prisons will not only clamp down on violence, but help root out the rampant corruption known to flourish amongst civilian prison wardens and guards.

Gang violence is a major problem in Honduras. Many young men belong to the two major rival gangs, Barrio 18 and Mara Salvatrucha. Members of the community who live in a gang's territory are expected to pay "war taxes" for "protection," and any perceived act of disobedience or disloyalty to the gang is often punished by murder.

Although homicide rates have dropped slightly since 2012, when Honduras had the highest murder rate of any country not technically at war, there is still a sense that gangs can kill with impunity as only 4% of murders in the country end in conviction.

The plague of violence is why many Hondurans risk the dangerous trek to try to immigrate into the United States.

A US federal court accused the brother of Honduras' president of being a "violent drug trafficker of epic proportions." Prosecutors allege President Juan Orlando Hernandez has received millions in drug money bribes. (03.10.2019)

The drug case revealed damning testimony against the Honduran government. President Hernandez has denied any role in shielding drug traffickers. (19.10.2019)