Merkel′s Criticism of Russia Over Energy Marks Shift in Ties | Germany| News and in-depth reporting from Berlin and beyond | DW | 13.01.2007

Chancellor Angela Merkel's rebuke of Russia over it halting oil supplies to Europe has revealed a possible shift in ties between the two countries. 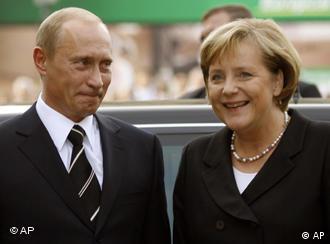 Merkel's approach to Putin is a far cry from her predecessor's

Merkel on Tuesday strongly criticized the move by Russia to cut off oil supplies to five European countries without warning and accused Russia of betraying German trust.

"It is not acceptable when there are no consultations about such moves," said Merkel. "That repeatedly destroys confidence and you cannot build cooperation based on true mutual trust in this way."

Many consider this move a sharp shift from the largely uncritical stance toward Russia and President Putin taken by former Chancellor Gerhard Schröder.

German business daily Handelsblatt welcomed what it saw as a new approach towards Russia.

"At last! The new tone the chancellor is taking towards the Kremlin sounds a little like liberation from the vice grip of Schröder's stance," it said in an editorial on Wednesday.

A friend of Putin's

Before leaving office in 2005, Schröder pushed through a deal to construct a natural gas pipeline from Russia to western Europe via the Baltic Sea. Then, after leaving office, Schröder accepted a position as chairman of the North European Gas Pipeline, a subsidiary of Russian gas giant Gazprom. 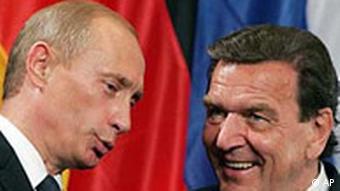 Putin and Schröder had a close political and personal friendship

Throughout his seven years in office, Schröder was reluctant to criticize Putin and Russia, once calling his Russian counterpart a "flawless democrat" and urging patience concerning Russia's democratic development.

"We all want to see a strong, prosperous and democratic Russia," then Chancellor Schröder told Time Magazine in 2005, "I think President Putin is on the right path to get there."

Aside from the official relationship between the two leaders, a personal connection also developed. Putin, who speaks fluent German, helped Schröder and his wife, Doris Köpf, adopt two children from Putin's hometown of St. Petersburg.

Jury out on Merkel

With Germany holding the dual presidencies of the European Union and the G8, Chancellor Angela Merkel's comments toward Russia are especially potent according to an editorial in the Kieler Nachrichten newspaper.

"Her words carry weight because she speaks as president of the EU, which is the biggest importer of Russian oil and gas, and as chairwoman of the G8, of which Russia would like to become a permanent member." 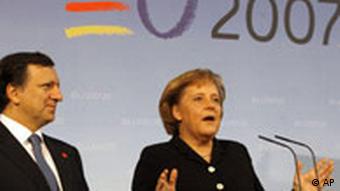 Merkel made these statements ahead of a planned meeting with Putin in Moscow on Jan. 21 when the EU and Russia will discuss energy policy.

While some observers have praised Merkel's criticism, others see it as complicating the way Germany and the EU deal with Russia.

"Schröder would immediately have called Putin or the other way around ... and the problem would have been resolved rapidly," Alexander Rahr, the director of the Russian affairs program with the German Council on Foreign Relations told AFP.

Rahr said the shift in relations with Russia was the result of "a revival of trans-Atlanticism" under Merkel, who has actively sought to repair ties with the United States that were strained under Schröder. 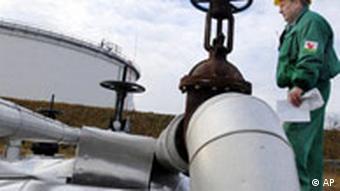 Russia has made Europe nervous on the energy front

On Thursday, Russia and Belarus reached an agreement to reopen the shipments of oil to Europe.

Russia cut all oil flowing through the Druzhba (Friendship) pipeline to Belarus on Tuesday because of a dispute over transfer fees. The pipeline is one of the main channels of oil from Russia to Germany, Poland and the Czech Republic.

About half of Europe's oil supplies come from Russia, with the majority of it piped through Belarus and Ukraine.