Chancellor Angela Merkel's party has said it plans to introduce quotas to increase female representation in the party. An initial quota will go into effect next year, with gradual increases to follow. 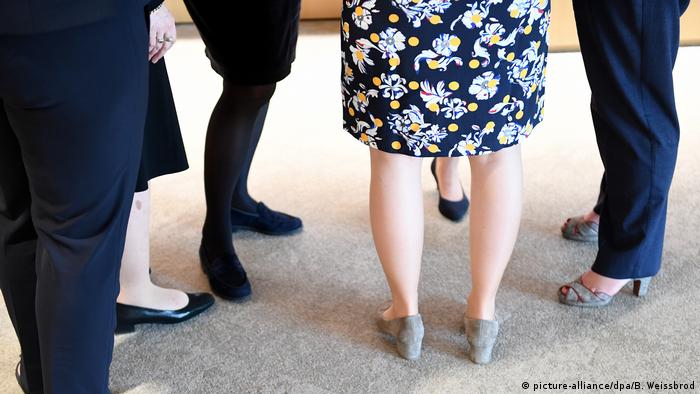 Starting next year, at least 30% of CDU government positions and members of parliament in Chancellor Angela Merkel's party are to be filled by women. The quota is to be raised gradually to 40% in 2023 and 50% in 2025.

The commission in charge of drafting the party's internal rules agreed to the new quotas in a meeting held overnight, sources familiar with the proceedings told reporters.

The proposal must still be approved by party members during the CDU's party conference in December.

Sources familiar with the talks told news agency AFP that exceptions to the mandatory quotas can be made "if not enough women run for office to meet it."

District chairpersons will be required to report back to the party on the development of the proportion of women and measures to promote women.

The commission did not reach a decision requiring the quotas for candidates in state, European, and federal elections.

However, sources said that a compromise for a required target is emerging that would allot at least three of the top-ten candidate positions in Germany's proportional representation system to women starting in 2021. The number would rise to four in 2023 and five in 2025.

For Germany's federal election, for example, this would mean that each of the 16 state delegations elected to the Bundestag for the CDU would be co-head by at least 3 women.

The new regulation was a compromise reached after tough negotiations.The original draft of the rules had pursued more far-reaching goals, which included a mandatory quota of 50% from 2023 for party offices as well as for candidate lists, but parts of the party were strongly opposed to this target.

The CDU's announcement came the same day that Germany's family minister presented the country's first national strategy for gender equality. The strategy lays out nine goals for achieving equality between men and women in Germany, with the aim of influencing legislation.

The CDU has held a plurality of seats in the German Bundestag for decades and has thus far been reluctant to impose gender equality rules, unlike Germany's left-of-center parties. The new regulations, if passed, are likely to have wide-sweeping effects on gender parity in German politics overall.

Digitalization and e-commerce have created a whole new wave of entrepreneurship and women are part of the revolution. A new initiative for female entrepreneurs aims to provide them with the necessary digital training. (18.06.2018)