Some say the chancellor reigns over Germany like a queen. That’s not a compliment in a parliamentary democracy. Merkel’s willpower, her image and the election campaign explain how that impression arose. 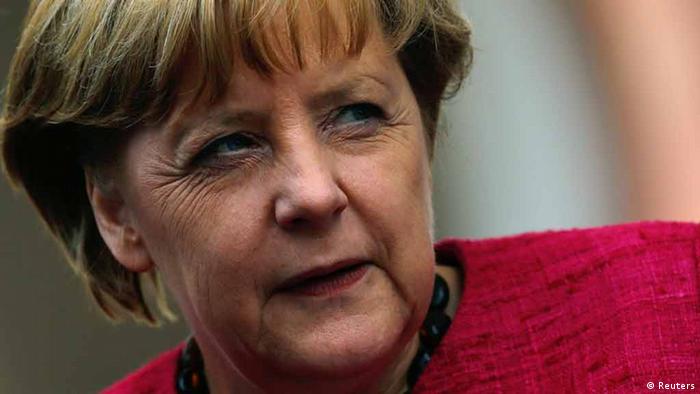 In 2005, when Angela Merkel became the Chancellor of the Federal Republic of Germany for the first time, many doubted that she even possessed the will for power that was needed for the job as chancellor. There were few who – back then – would have thought that this woman of all people could potentially even make it into a third term in office. Only two CDU politicians have achieved that in Germany before: Konrad Adenauer, who was Chancellor from 1949 to 1963, and Helmut Kohl, from 1982 to 1998.

But Merkel did not become Chancellor by chance or in passing. She demonstrated her will for power long before she first moved into the chancellery. She distanced herself publicly from her political mentor, Helmut Kohl, in a newspaper article, when his and her party, the CDU, got involved in a party donations scandal. Merkel became Federal Chairperson of the CDU a short while later, after having gained some experience as a federal minister in Chancellor Kohl's cabinet.

Opinion polls were against Peer Steinbrück, Germany's Social Democrat candidate, but that didn’t keep him from trying to swing the vote until the very end.

No arguments, no visions - we must be doing well

The election campaign is over. A new parliament and a new government will be sworn in soon. Will the political parties’ efforts pay off? DW’s Volker Wagener doesn’t think German voters really want change. (20.09.2013)

Will Angela Merkel or Peer Steinbrück win the race? Although the two top candidates are in the media spotlight, German elections are all about political parties rather than individuals. (19.08.2013)

Merkel's intuition for power, her tactic and strategic skills and her talent for adaptation have made her one of Germany's and Europe's most significant contemporary politicians.

She promised her citizens that Germany would emerge stronger from the crisis. And the economic and employment statistics seem to suggest that the promise is being fulfilled: they have been good for years. Abroad Merkel presents herself as the strict defender of German interests. Whether it's after G8 meetings or after EU summits, she always makes sure to suggest that German money is safe in her hands. The Anglo-Saxon world – whose opinion matters to most Germans – regards Merkel as the most powerful woman worldwide.

During the European economic and financial crisis, she has also become the symbolic figure of euro rescue politics. Merkel said she wanted both Germany and Europe to emerge stronger from the crisis. Her politics follow one concept: yes to financial aid for others, but only under certain conditions. That's how she believes Europe can become more competitive.

But Merkel has also had a significant impact on her own political party in Germany. She was facing competition by many in the CDU at first. But those competitors have since given up, they have been pushed aside or they have lost their jobs following political affairs. To Angela Merkel, disloyalty and political weakness are clear expulsion criteria. Politics require power. Merkel made use of her own power to change the party's political agenda – and move the CDU further towards the political center. There used to be a time when conscription, nuclear power and a traditional image of the family were among the most crucial German Conservatives' convictions. Merkel changed that. In 2011, she decided to phase out nuclear power for good.

Critics say she has robbed her own party of its profile and made it more social democratic. They accuse her of opportunism. Some CDU members probably left the party to join the newly founded party 'Alternative for Germany', AfD.

But Merkel's political course seems to appeal to the young generation in Germany. In a non-representative, yet large-scale survey among under 18-year-olds, the CDU leaped from ranking third in 2009 to first rank today.

Merkel steers through the crisis

Merkel has enjoyed quite a lot of support from the German population for years now. With a strong will to retain power, she has perfected her public image. When Germans were unsettled by the crisis, the Chancellor satisfied their demand for stability and orientation. Political scientist Karl-Rudolf Korte described her image as follows: "She somewhat lacks passion and emotion, but she is thorough and genuine when it comes to her mission: serve the interests of voters rather than her own."

Merkel sends out signals of stability also when it comes to her look and style. She has only ever slightly changed her hairdo in recent years. She wears business costumes which consist of generally simple black trousers and blazers that only vary in color. The world out there may be stormy – but switch on the TV news, and there is Angela Merkel in her usual look with her typical expression of unexcitedness.

The latest fruit of this image policy campaign was a gigantic poster at Berlin's central station displaying Merkel's most typical gesture. On a space of almost 2,400 square meters, the poster showed Merkel's hands shaping a diamond. The poster read: "Germany's future in good hands". 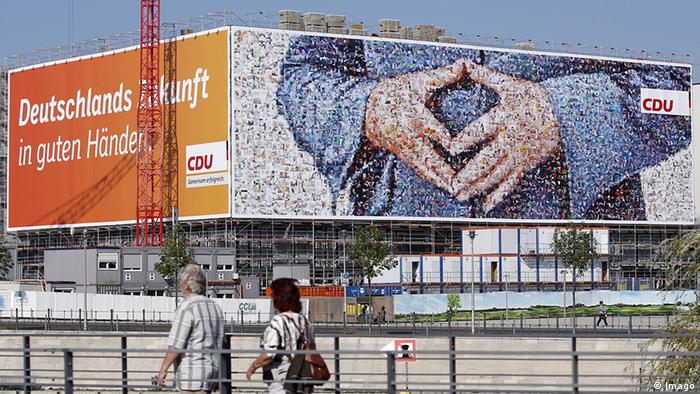 The billboard poster consists of 2150 photos of Angela Merkel's hands.

Personal, but not private

The poster was symbolic of the CDU's election campaign this year, in which the only focus was on the Chancellor as a person. In return, Merkel had to share a bit more of her private life with the public – but she chose what she shared carefully. She showed herself as 'grandmother Merkel' together with her husband's grandchildren. It was also thanks to Joachim Sauer that the public learnt that he always wants more crumble on his crumble cake, or Streuselkuchen.

But there has still not been a real at-home interview. The few things Germans do know about their Chancellor is that Merkel and her husband live in an apartment in an older building with high ceilings in Berlin's historic center. She spends her free time in the Uckermark, a rural area between Berlin and the Baltic Sea coast, where she grew up. Her mother still lives in the region. Her father, who was a theologian, passed away in 2011.

Political scientist Karl-Rudolf Korte said that while Merkel uses her personality to campaign, she keeps her personal life very private. He added that at the end of the day she should be judged by what's public: by what she has achieved as Chancellor.