Will Angela Merkel or Peer Steinbrück win the race? Although the two top candidates are in the media spotlight, German elections are all about political parties rather than individuals. 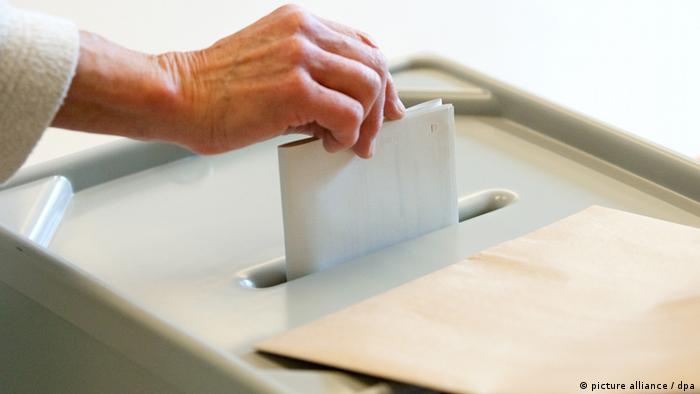 "If you're not a member of a political party, you have little chance of getting one of those 600 seats in the Bundestag." That was what a guide to Germany's lower house of parliament told a young visitor recently.

Germany's basic law stipulates that "Political parties shall participate in the formation of the political will of the people." But many political scientists admit that they do far more than "participate," they basically decide on who can shape politics in Germany. It is very difficult for any independent candidate without party backing to obtain a seat in parliament. And that is because of the very complex electoral system.

61, 8 million Germans are eligible to vote this year - these are all Germans above the age of 18; three million of them are voting for the first time.

These figures were provided by the Federal Statistics Office, the head of which also supervises the general election. All parties seeking to take part must register with him and get his approval to compete on the national level.

They need to have members across Germany, a written statute and a political platform, which explains their political mission and shows they adhere to democratic principles and Germany's constitution, it needs to have elected an executive board, the party headquarters need to be on German territory, and every party that is not yet represented in a German parliament at state or federal level, needs to prove it has widespread support by collecting signatures of 0,1 percent of the electorate to get onto the ballot.

34 political parties have been cleared to participate in the election on September 22. Only nine of them will compete in all of Germany's 16 states.

Tried and tested for 60 years

Some of those parties may get no more than a few hundred votes on Election Day and therefore never make it into the Bundestag. Under German election law, parties must obtain a minimum of five percent of the proportional vote to get into parliament. This is intended to ensure stability by preventing tiny splinter parties - like those that plagued the Weimar Republic in the 1920s from entering into parliament . Majority building would be difficult and decision making all but impossible if parliament were dominated by splinter groups. This "five percent hurdle" has kept far-right and other extremist political parties out of the Bundestag.

However, an exception to the five-percent-rule is granted to parties that field winning candidates in at least three constituencies.

Another lesson learned from the past was to allow voters not just to vote for parties and their platforms, but also select individuals to represent their regional interests. So a combination of proportional representation and a first-past-the-post system was implemented, allowing everyone to cast two votes at each election. This system has been basically unchanged for the last 60 years. 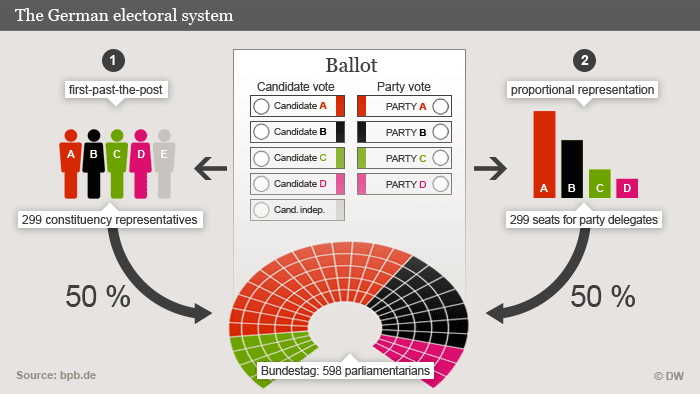 With the "first vote" ("Erststimme") a voter chooses his favorite candidate. Germany is divided into 299 constituencies - one per 250,000 inhabitants. Each party can field one candidate in each constituency. And independent candidates can also run - if they have gathered at least 200 signatures from supporters. The candidate with the most votes wins (first-past-the-post).

There are 598 seats in Germany's Bundestag, and this "first vote" is to fill half of those seats, ensuring that each district is represented.

The "second vote" ("Zweitstimme") goes to a political party. This vote determines the Bundestag's overall makeup: the percentage of seats each political party gets.

At party conferences the parties draw up lists with candidates for each federal state. Again: States with a larger population get to send more parliamentarians to the Bundestag than smaller ones.

The parties rank their candidates, and only the top few names are printed on the ballots. So while the voter chooses a party, he can not be sure which individuals further down on the party list will make it into the Bundestag.

Chancellor Angela Merkel's name, for example, will appear at the top of the CDU party list on the ballots in Mecklenburg-Western Pomerania. That is the state where her constituency lies. So in effect she has two chances to get into the Bundestag. If she gets the most votes in her constituency, she has secured a seat. But should she fail to get a majority there, she can still get in via her party list. This form of "safety net" is something that critics of the German election system see as problematic. 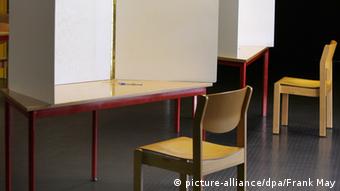 Voter turnout in Germany is declining: In 2009 it was at 71 percent

There has been some criticism of the German election system by those who would like to see each and every individual delegate approved in nam by his electorate.

These critics disagree with the procedure of political parties drawing up lists of candidates behind closed doors.

Others see the system as overly complex. Historically, the first and second votes have mostly been proportionately identical, but there are times when a party will gain more seats through the first vote than they should have seats according to the proportional, second vote. If that happens, the party may hold on to those additional so-called "overhang" seats ("Überhangmandate").

This tends to benefit the large parties, SPD and CDU, who can afford to field candidates in every constituency. The constitutional court has decided that this provides them with an unfair advantage. So for the 2013 election other parties will receive more seats to balance out these extra mandates.

This will further inflate the number of parliamentarians: 2009-2013 the "overhang seats" had already increased the Bundestag to 622 members, and now it is likely to become even larger.

Immigration and the ballot box

More than 5 million people with an immigrant background will be eligible to vote in September. Whether they vote, and which candidate they may end up choosing, can be influenced by this heritage. (16.08.2013)