Merkel pledges to protect Muslim faith in an 'undivided' Germany

German Chancellor Angela Merkel has addressed the recent Paris attacks, describing the freedom of the press as one of society's greatest treasure. She also said that Islam belongs to Germany as much as Judaism. 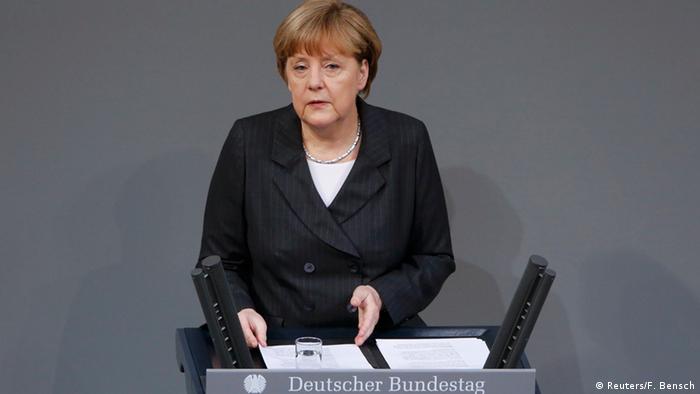 Opening her address to the German parliament on Thursday morning, Angela Merkel said that the Germany stood alongside France in solidarity in their time of loss.

"In the terrible hours, during which Paris and the French suffered between Wednesday afternoon and Friday afternoon last week, the subject was two of the great evils of our time, which not always, but often go hand in hand: murderous Islamist terrorism and anti-Semitism - the hatred of Jews. We remember here today in the Bundestag the 17 people killed in these attacks," Merkel said.

Ten employees of the satirical French magazine Charlie Hebdo were killed last Wednesday when gunmen Cherif and Said Kouachi opened fire at the publication's Paris headquarters. They were heard to have shouted, "We have avenged the Prophet." Two police officers also lost their lives in that attack.

Press freedom one of 'greatest treasures'

Referring specifically to the Charlie Hebdo attack, which was seen by many as a direct attack on the media, Merkel said that freedom of the press was "one of the greatest treasures of our society."

She went on to say that the prerequisite for such freedom is tolerance, a "demanding virtue, not to be confused with sitting on the fence."

Merkel's speech on Thursday also came in light of a recent expressions of xenophobic sentiment in Germany, propagated mainly by the anti-Islamization group PEGIDA, mainly in the eastern German state of Saxony. Dresden is its capital.

"Many people would find it difficult to say that Islam belongs to Germany," Merkel said on Thursday. "People ask me, which Islam do I mean?"

"They want to know why terrorists have so little value for human life and why they always link their deeds to their faith," she said, calling on the urgent need for the Islamic clergy to clarify these issues.

Elsewhere in Germany, demonstrations by the so-called "Patriotic Europeans Against the Islamization of the West" have been predominantly outnumbered by counter demonstrations.

PEGIDA marches in Dresden continue to pull in numbers, however, with a record 25,000 people turning out onto the streets on Monday evening for the city's twelfth rally by the right-wing populist group.

Merkel also said that as chancellor she would protect Germany's Muslim community.

"Every exclusion of Muslims in Germany, every general suspicion is forbidden," Merkel said, emphasizing that the free practice of religion, including Islam, was protected under by the German Constitution.

"We will not let ourselves be divided," the Chancellor added.

Members of the government and Muslim groups were among the many gathered at the Brandenburg Gate to promote interfaith understanding on Tuesday. 'We are all Germany,' President Joachim Gauck declared in his speech. (13.01.2015)