Members of the government and Muslim groups were among the many gathered at the Brandenburg Gate to promote interfaith understanding on Tuesday. 'We are all Germany,' President Joachim Gauck declared in his speech. 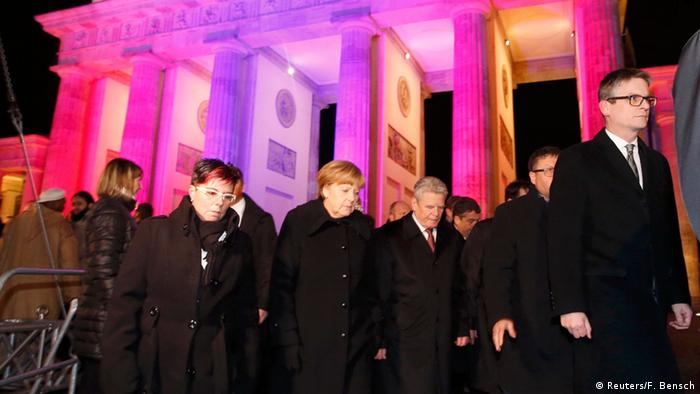 A solemn demonstration was held in Berlin to promote tolerance and religious freedom in the wake of last week's terrorist attacks in Paris which left 17 people dead in Paris. Holding signs that say "Yes to tolerance" and "Je suis Charlie" complete with crescents, crosses, and Stars of David, a crowd of 14,000 gathered in front of the Brandenburg Gate, reported ARD television.

The vigil was called by the Central Council of Muslims in Germany (ZMD), which represents 28 different Muslim organizations, and the Turkish Community of Berlin (TGB).

Shortly before the ceremony began, German Chancellor Angela Merkel and President Joachim Gauck stopped with ZMD chairman Aiman Mazyek in front of the French embassy for a moment of silence. Members of the public placed flowers and candles outside the embassy to show their solidarity.

'We are all Germany'

After beginning the rally with a prayer sung by an imam, Mazyek took the podium. He greeted the gathered government representatives, leaders from Christian and Jewish groups who also stood behind him on the stage, and the crowd.

Mayzek said "we all mourn" with France and the victims' families. "The terrorists have not won and will not win" he said to applause, and called on those gathered to stand together as a "society open to world." He concluded with "we are all Germany."

Mayor Michael Müller spoke next, and called on Berliners to reject anti-Islam sentiment, a reference to the PEGIDA anti-Islamization marches that have popped up across Germany in recent weeks, especially in Dresden.

Müller's speech was followed by a group of religious leaders, including Matthias Heinrich, the Catholic Archbishop of Berlin, and Abraham Lehrer, the President of the Central Council of Jews in Germany.

Lehrer praised the actions of Lassana Bathily, a Muslim immigrant from Mali who protected Jewish shoppers at a supermarket that also came under fire during last week's attacks in Paris. He told the crowd that Jews constantly faced the threat of violence, mentioning Palestinian group Hamas by name, and echoed a quote from French Prime Minister Manuel Valls that "a France without Jews is not truly France."

President Joachim Gauck repeated Mazyek's call that "We are all Germany," and called the practices of the "Islamic State" and the young men from Germany who join them a "perversion of religion."

All of those gathered on the stage locked arms with one another to pose for a symbolic photograph, bringing an end to the official proceedings. 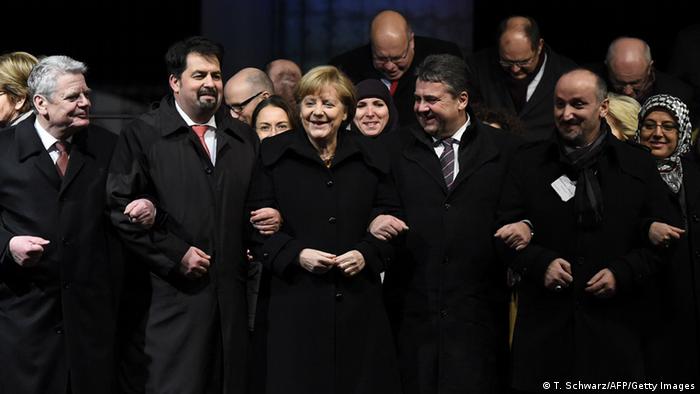 In an homage to Sunday's demonstration in Paris, the assembled dignitaries linked arms in solidarity

Migration Commissioner Aydan Özoguz had said before the ceremony that she hoped that the vigil would be a strong sign of people standing together for common "values such as liberty and brotherhood."

'Xenophobia has no place in Germany'

The annual German Islam conference also took place on Tuesday in the German capital. Chancellor Merkel said that "xenophobia, racism, and extremism have no place in this country," and Interior Minister Thomas de Maiziere called on the country's Muslims to help fight extremism as well.

At the conference, a spokesman for the Coordination Council of Muslims, Erol Pürlü told reporters that "we cannot allow radical extremists and terrorists, of any stripe, to create division in our society."

Numerous members of government were also in Berlin to take part in the demonstration, along with members of the parties which hold seats in parliament and representatives of work unions.

Green party domestic expert Volker Beck has called on the government to do more than attend vigils, saying it is time for the government to make Islam and mosques legally equivalent to Christian churches. It was "socio-politically counterproductive and sows a culture of mistrust," to discuss Islam in Germany only in terms of security, said Beck.

Chancellor Merkel is expected to deliver a speech on Thursday about how the government will proceed in the wake of the Paris attacks.

Chancellor Angela Merkel is to join a rally organized tomorrow by Muslim and Turkish community groups in Berlin for an 'open and tolerant' Germany. It comes in the wake of last week's terror attacks in Paris. (12.01.2015)