Chancellor Angela Merkel is to join a rally organized tomorrow by Muslim and Turkish community groups in Berlin for an 'open and tolerant' Germany. It comes in the wake of last week's terror attacks in Paris. 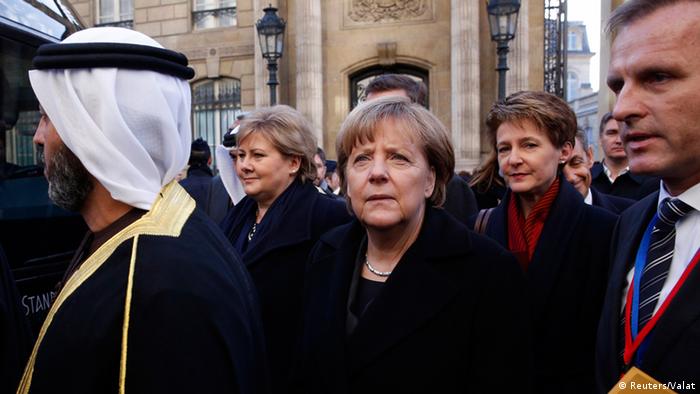 Other government leaders and members of opposition parties plan to join the gathering as well at the Brandenburg Gate in the heart of Berlin.

The Chancellor went to Paris on Sunday to walk alongside French President Francois Hollande and other world leaders at a huge Paris solidarity rally.

Organised by Germany's Muslim organisations and Turkish community groups, Berlin's rally will also honor the victims of last week's killings in Paris, including the shootings at the offices of the satirical French weekly newspaper Charlie Hebdo.

Merkel's spokesman Georg Streiter announce her attendance at the Berlin rally during a weekly press conference in the capital on Monday.

Tuesday's rally is to condemn violence and social division, according to its organisers.

The Central Council of Muslims in Germany said the vigil would be held under the banner "Let's be there for each other. Terror: not in our names!".

The Turkish Community of Berlin condemned the "despicable terror attacks" in France and said there was "no justification in Islam for such acts."

Turkey's Davutoglu due in Berlin

Turkish Prime Minister Ahmet Davutoglu began a visit to Berlin on Monday and was expected to ask Merkel to address growing anti-Muslim sentiment in Germany with concrete action, according to Turkish press reports.

Germany's population of 80 million people includes about four million Muslims. Three-quarters of them are of Turkish origin. Haflf of these have German citizenship.

Separately, Germany's anti-Islamisation movement is set to hold another rally in Dresden on Monday evening.

Leaders of the so-called "Patriotic Europeans Against the Islamisation of the West" (PEGIDA) have asked participants to wear black armbands and observe a minute's silence for "the victims of terrorism in Paris."

At New Year, Merkel urged Germans to turn their backs on PEGIDA rallies.

On Sunday, Justice Minister Heiko Maas called for Monday's rally in Dresden to be called off.

Mass told the mass-selling daily Bild: "It is simply disgusting how the people behind these protests are trying to exploit the despicable crimes in Paris."

Counterprotests have gained momentum, with 35,000 people turning out Saturday in Dresden against PEGIDA.

Its intended demonstration follows a firebombing early Sunday against a tabloid newspaper in Hamburg which had reprinted cartoons of the Islamic prophet Muhammad from the Charlie Hebdo newspaper.