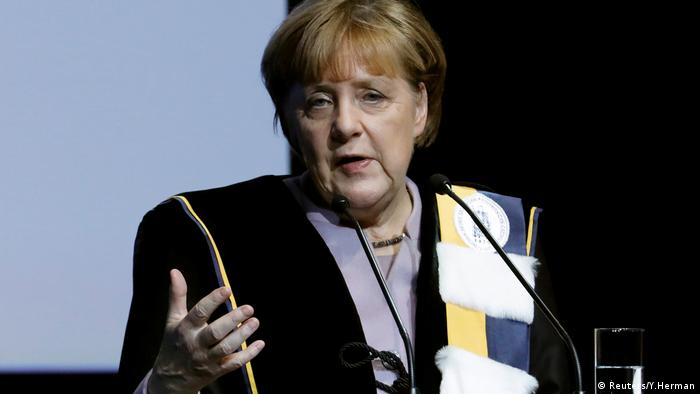 The German chancellor has urged member states to work together on security in the wake of deadly terrorist attacks on European soil. She also warned of the polarizing effect "Brexit" negotiations could have on the bloc. (12.01.2017)

Steinmeier has said he "can't interpret" US President-elect Donald Trump's comparison of a leaked dossier to conditions in Nazi Germany. He also said Trump's penchant for Twitter won't last as a foreign policy strategy. (12.01.2017)

As concern grows in Europe about US President-elect Donald Trump's commitment to transatlantic cooperation, German Chancellor Angela Merkel pushed for the European Union to "take more responsibility" on the world stage during a speech on Thursday in Brussels.

"From the point of view of some of our traditional partners - and I am thinking here as well about the transatlantic relations - there is no eternal guarantee for a close cooperation with us Europeans," Merkel told an audience in Brussels after receiving honorary doctorate degrees from Belgium's prestigious Leuven and Ghent universities.

Although the chancellor did not mention Trump by name, she appeared to be referencing the incoming US leader's remark that he would consider a country's financial contributions to the NATO alliance before coming to their aid.

"Europe is facing the biggest challenges for decades," Merkel said mentioning conflicts on its borders like that in Ukraine.

She added that it would be "naive always to rely on others who would solve the problems in our neighborhood."

Merkel said that Great Britain's shock vote to leave the EU increased the importance of solidarity within the rest of the bloc, which has been discussing measures to boost defense cooperation and other issues.

"We should see this decision as an incentive to work together (for the goal), to hold Europe together now more than ever, to improve it further and to bring the citizens closer together again," she said.

The EU agreed to take first steps toward expanding security and defense cooperation at a summit in December.

Merkel, who is seeking re-election later this year, has faced criticism in Europe over her refugee policy for Syrian refugees. She also said on Thursday that Europe needed to accelerate its work on an entrance and exit registry to better control the bloc's borders.