PM Morawiecki said his country would likely follow Austria and the US by pulling out of the treaty. Chancellor Merkel reiterated Germany's commitment to the deal, which seeks an end to dangerous and irregular migration. 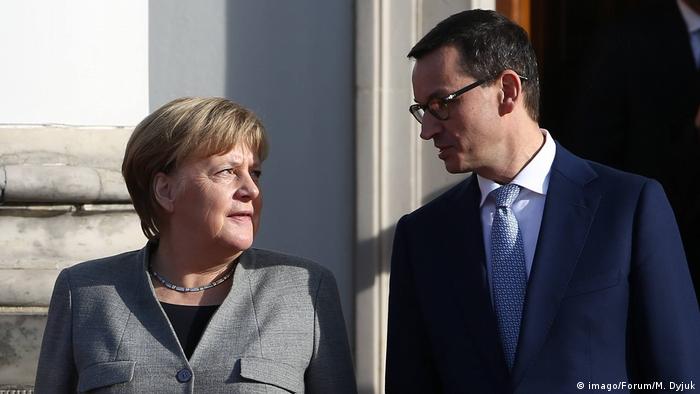 Polish Prime Minister Mateusz Morawiecki said during a joint press conference with German Chancellor Angela Merkel on Friday that he was considering following the lead of the US, Austria, and Hungary by pulling out of a UN migration pact set to take effect in December. Merkel, on the other hand, defended the pact.

"It is very likely that ... we will not be part of the global pact,"  Morawiecki said.

Merkel, on the other hand, praised the treaty's commitment to ending illegal and dangerous immigration, saying it was "very important" and pointing out that it was not legally binding.

Germany played a major role in the 18 months of negotiations that led to the final draft of the deal, which was agreed upon in July.

Merkel, Morawiecki and some of their cabinet ministers were meeting for the 15th iteration of direct government consultations between Berlin and Warsaw, which were put on hold in 2016 — ostensibly because of scheduling conflicts, though relations between the two governments have been particularly tense, not least in the immediate aftermath of the 2015 general election and change of government.

The Polish government has regularly expressed its concern over Merkel's relatively open immigration policy, while Germany has voiced similar disapproval of several major constitutional changes put in place by Morawiecki's ruling Law and Justice (PiS) party, such as curbs on judicial independence.

The two countries have also disagreed on Nord Stream 2, a Russian-German gas pipeline project that Poland has said will give Russia too much sway in Europe, to the detriment of Poland and Ukraine.

Just days before Merkel's visit, Polish President Andrzej Duda once again called for Germany to pay Poland massive reparations for the crimes and damage carried out in Nazi-occupied Poland. Germany has argued that the matter was settled in the early 1950s.

A Polish parliamentary committee set up by the PiS government to look into possible reparations put a potential figure at around $850 billion (around €750 billion) earlier this year.

Although neither leader brought up reparations or constitutional reform on Friday, Merkel did try to assauge Polish concerns about energy security. She said that Germany and Poland share the goal of having Ukraine be part of the transit route for Russian gas, but that this "represents a security component for Ukraine," which must be taken into account.

Both leaders sought to present a friendly relationship despite the recent strains on bilateral relationsh. Merkel called Morawiecki "dear Mateusz" and said they were both willing to work towards the future in a peaceful and friendly manner.

Czech leader Andrej Babis said his country might follow the lead of Austria, the US, and Hungary. Meanwhile, the EU expressed its disappointment in Vienna for withdrawing after playing a key role in the negotiations. (01.11.2018)