A feud over World War II reparations will come to the fore as Polish leaders hold talks with German Chancellor Merkel's government. Germany has said the issue is settled, but a Polish parliamentary inquiry disagreed. 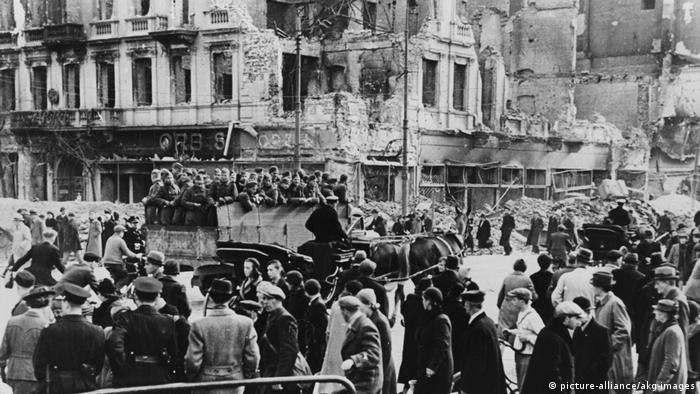 For over a year, members of Poland's governing national-conservative Law and Justice Party (PiS) have been raising their voices, calling once again for Germany to pay World War II reparations to Poland. The issue is sure to come up during German Chancellor Angela Merkel's visit to Warsaw on Friday.

Most recently, Polish President Andrzej Duda has stated it in an interview with German newspaper Bild am Sonntag.

Duda told the newspaper that a parliamentary inquiry had investigated Poland's war damages and its preliminary results showed that the country's wartime losses have not been properly compensated.

"It is a question of truth and responsibility," he said.

Duda's comments directly contradict Germany, which has repeatedly said that the status of reparations was settled in the early 1950s.

The call could become a sticking point when government representatives from Germany and Poland meet for consultations in Warsaw next week.

Duda's call echoed the remarks of the previous Polish president, Jaroslaw Kaczynski, who in June said that his country needed to be compensated for the murder of millions of people and the destruction of material goods that took place during Germany's invasion and occupation of Poland during the war.

Duda's interview follows the Polish president's meeting with German President Frank Walter Steinmeier in Berlin last week. Both discussed a joint commemoration to mark the 80th anniversary of the beginning of World War II in September.

During his visit, Duda harshly criticized the far-right Alternative for Germany party and its attacks against Germany's postwar culture of remembrance.

"The fact that, until now, no German party has questioned Germany's guilt has made the great reconciliation process between Poland and Germany possible," he said. "We owe our good relationship to the fact that we think about the past and that it represents a warning for us."

Poland's de facto leader Jaroslaw Kaczynski has revived demands for German war reparation payments, despite the issue being tabled for decades. The move is nothing more than a diversion, says DW's Bartosz Dudek. (04.08.2017)

Poland has no right to WWII reparations, German lawyers say

Legal experts hired by Germany's Bundestag say its neighbor has no claims to compensation for World War II crimes. Their report reaffirms that any claim by Warsaw would be barred by current laws. (01.09.2017)