Merkel calls for European response to Syria, takes flak from opposition | Middle East| News and analysis of events in the Arab world | DW | 22.02.2018

Angela Merkel has called on the EU to play a more active role in Syria, but German opposition politicians have told DW that her words fall short. One noted how Merkel "forgot" to mention NATO member Turkey's involvement. 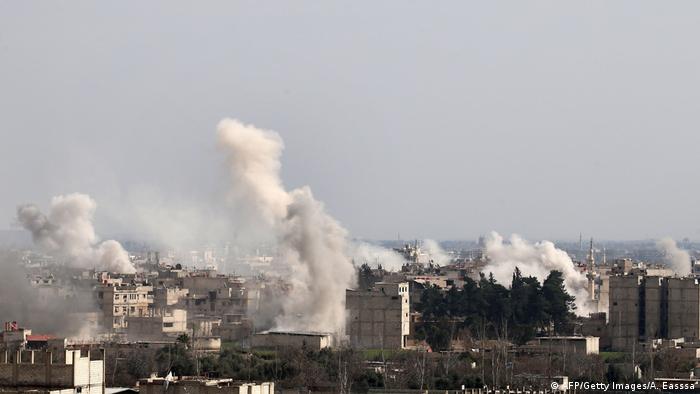 German Chancellor Angela Merkel on Thursday called on the European Union to play a greater role in the Syrian conflict, as President Bashar al-Assad's regime and Russia pressed an offensive against a rebel-held enclave near Damascus that has killed hundreds of civilians in the past five days.

"What we see at the moment, the terrible events in Syria, the fight of a regime not against terrorists, but against its own people, the killing of children, the destruction of hospitals, all this is a massacre which has to be condemned," Merkel told the Bundestag parliament in Berlin in a debate on Thursday.

According to monitors based in the UK, Russian and Syrian regime bombardment of rebel-held eastern Ghouta has killed more than 400 civilians and injured around 2,000 more since Sunday, with residential buildings, hospitals and infrastructure being hit.

The Damascus suburb of 400,000 civilians has been under siege for five years, making it "hell on Earth," UN Secretary General Antonio Guterres said.

Merkel's comment to the Bundestag comes a day ahead of EU leaders meeting in Brussels and as a coalition agreement drawn up between her conservatives and the Social Democrats is awaiting approval.

The chancellor said that in particular Europe must put pressure on the Assad regime and its key backers, Russia and Iran.

German Foreign Minister Sigmar Gabriel told reporters on Thursday that he had already spoken to the head of the International Committee of the Red Cross and intended to speak with his Russian counterpart Sergey Lavrov.

Millions of people have been of displaced and more than 400,000 people killed during the seven-year Syrian civil war.

Stefan Liebich, an MP with the Left Party and member of the Bundestag's foreign relations committee, told DW that Merkel was right to blame the Assad regime and its backers.

"But she forgot to mention another part of this war. Our NATO partner Turkey is invading Syria and fighting NATO allies, the Kurdish YPG [militia]. She totally forgot to mention this," Liebich said, adding that the the Turkish operation against Afrin was against international law.

"One NATO partner, Turkey, is threatening another NATO partner, the United States," he said, a reference to the US support for Kurdish forces in Syria.

'Condemning is not enough'

Omid Nouripour, a Green Party MP and member of both the foreign and defense committees in the Bundestag, told DW that it was not enough for Merkel to simply condemn the situation in Syria.

"It's not enough to say 'we are condemning it,'" Nouripour said. "I would love to see the chancellor talking about the Russians, addressing the Russians and asking them to take responsibility for their own votes in the UN Security Council."

"The question from the other sides, from the US, from the Russians, has always been: 'What is the European position?' And we've never had one. This is why we've been sidelined. If we want to have a voice again, if we want to be heard, if we want to contribute to resolving this conflict, we have to come together, we have to find a common voice and a common language to talk to the world," Nouripour told DW.

Myanmar: At least 18 dead in crackdown on anti-coup protests