Lufthansa will no longer address you as ′ladies and gentlemen′ | Business | Economy and finance news from a German perspective | DW | 13.07.2021 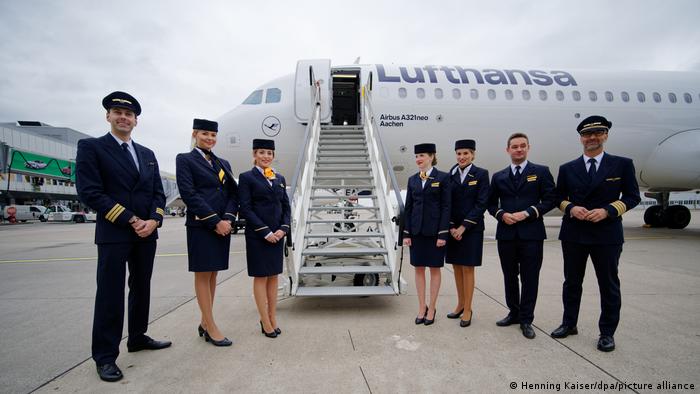 "Sehr geehrte Damen und Herren, herzlich willkommen an Bord" and its English translation, "Ladies and gentlemen, welcome on board," will soon be things of the past on Lufthansa flights.

The German flag carrier plans to use gender-neutral language. The change would apply to all airlines operated by the Lufthansa Group, including Austrian Airlines, Swiss and Eurowings.

Diversity isn't just an empty phrase, but is a reality for Lufthansa, Anja Stenger, the company's spokeswoman, told DW. "Starting now, we also want to express this attitude in our language," she said.

Lufthansa crews would now use gender-neutral phrases such as "Dear guests," "Good morning/evening" or simply "Welcome on board." The decision on how to address passengers will ultimately be made by the crew, who were informed about the change in May. The change is effective immediately.

"This move works at a symbolic level. It can be considered as a 'gender-sensitive' step through which the gender binary is questioned," Alexandra Scheele, an expert on sociology and economy at the Bielefeld University, told DW. "People who identify themselves beyond male/female, as well as everyone who is questioning the binary systems, might be addressed better without using the phrase 'ladies and gentlemen/Damen und Herren.'"

What is gender-neutral language?

Several organizations, such as the United Nations and the European Commission, have adopted guidelines for the use of nongendered language as part of their efforts.

The European Institute for Gender Equality defines gender-neutral language as "language that is not gender-specific and which considers people in general, with no reference to women and men."

A handbook on gender neutrality in language published in 2018 by the European Parliament says "gender-inclusive language is more than a matter of political correctness."

"The purpose of gender-neutral language is to avoid word choices which may be interpreted as biased, discriminatory or demeaning by implying that one sex or social gender is the norm," it said.

Those supporting a gender-fair language argue that gendering nouns leaves out people who do not identify themselves as male or female and perpetuates sexist stereotypes. The opponents reject calls to change the grammar as an assault on the language.

More than symbolism is needed

Last week, US automaker Ford changed its rules to adopt gender-neutral language. As part of the move, the company would replace the title "chairman" with "chair."

Scheele said that though symbolic measures such as gender-sensitive language could possibly create more awareness regarding gender equality, organizations still needed to do more at a practical level.

"It is important to analyze where and at what levels of the organization different genders are underrepresented, how the performed work is valued and paid. And the organization needs to develop an organizational culture in which discriminatory practices are made public or do not appear," she said.

Scheele advocates that companies use quotas as an instrument to increase the representation if a certain gender is underrepresented, introduce gender training to fight against discrimination, and undertake job evaluations to identify unfair pay structures.