Following the example of Austria and Canada, a German official has now proposed revising the national anthem in favor of gender-neutral phrases, according to a report on Sunday. 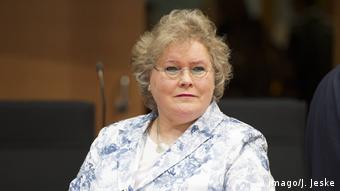 Read more: Germany's national anthem: A song with a tricky past

Rose-Möhring recommended swapping out the term "Fatherland" with the word "Heimatland" — a term that roughly translates to "homeland."

In early February, Canada approved changes to its national anthem to remove gender-specific terms, while Austria made the change in 2012.

Rose-Möhring, a politician with the center-left Social Democrats (SPD), said the proposal would not only make the anthem more inclusive, it would also fit with the newly-restructured interior ministry.

"Why don't we make our national anthem ... gender sensitive," Rose-Möhring reportedly wrote in the letter. "It wouldn't hurt, would it? And it fits with the new federal ministry for interior, construction and homeland."

SPD members voted in favor of a coalition deal with Chancellor Angela Merkel's conservatives on Sunday, meaning the SPD will retain the family ministry. The Bavarian Christian Social Union (CSU) will take over the interior ministry, which will now also focus on "homeland" concerns.

Predictably, news of Rose-Möhring's proposal sparked a heated debate on social media, with some arguing that the move could eliminate other gender-specific words like "mother tongue," while others supported the proposal.

Stefan Möller, the spokesman for the Thuringia state branch of the far-right Alternative for Germany (AfD) wrote on Twitter: "When women with double last names want to misappropriate a masterpiece like the national anthem, hopefully I'm not the only one getting angry."

Others proposed their own revisions to the anthem to include the gay community, as well.

Portions of the "Deutschlandlied" or "Song of Germany" have been Germany's national anthem since 1922, although after World War II and the fall of the Nazi regime, only the third stanza has been used.

The original text was penned by German poet August Heinrich Hoffmann von Fallersleben in 1841. The song has been Germany's national anthem since 1922, although Germany officially shortened the anthem to only the third stanza in 1991.

The controversial first stanza "Germany, Germany above all else" originally stemmed from efforts to unify the disparate German principalities in the 19th century. However, the Nazis affinity for the first stanza and the historical connotations it carries makes it highly controversial in Germany.

As many defenders of the original anthem text pointed out on Twitter on Sunday, the anthem's second stanza already favorably mentions women twice — albeit only in a refrain praising "German women, German loyalty, German wine and German song."

National anthem controversies around the world

Will Germany make its national anthem gender-neutral? It wouldn't be the first country to do so. National anthems can be controversial, and they are not always straightforward — whether or not they have words at all. (06.03.2018)