Is the gender pay gap here to stay?

The gender pay gap shows that women earn less than their male colleagues in the same job. But the indicator is also a political instrument and can ruin any debate if used in the wrong context. 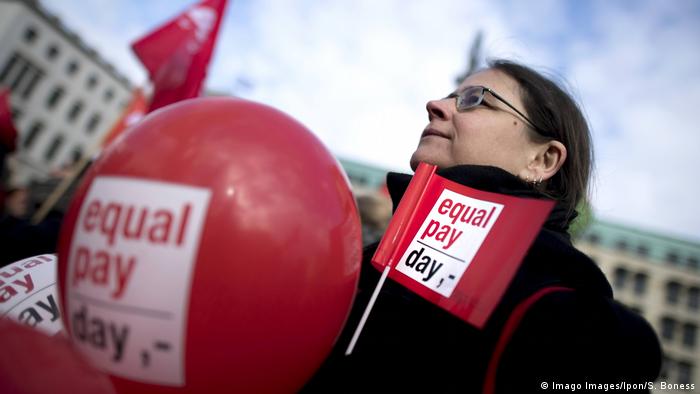 It's a hair-raising thing. The gender pay gap tool is meant to make things easier to understand by showing with just one figure to what extent women get a worse deal in their professions than their male colleagues.

But if you advance the argument that women in Germany log gross hourly earnings that are 18% below those of men on average — meaning that Germany currently has a gender pay gap of 18% — you may be confronted with the following reply:

A: "The nonadjusted gender pay gap doesn't mean anything and is pure polemic."

Or B: "Pack your things and go to Romania, or Italy, if you think things are better there!" 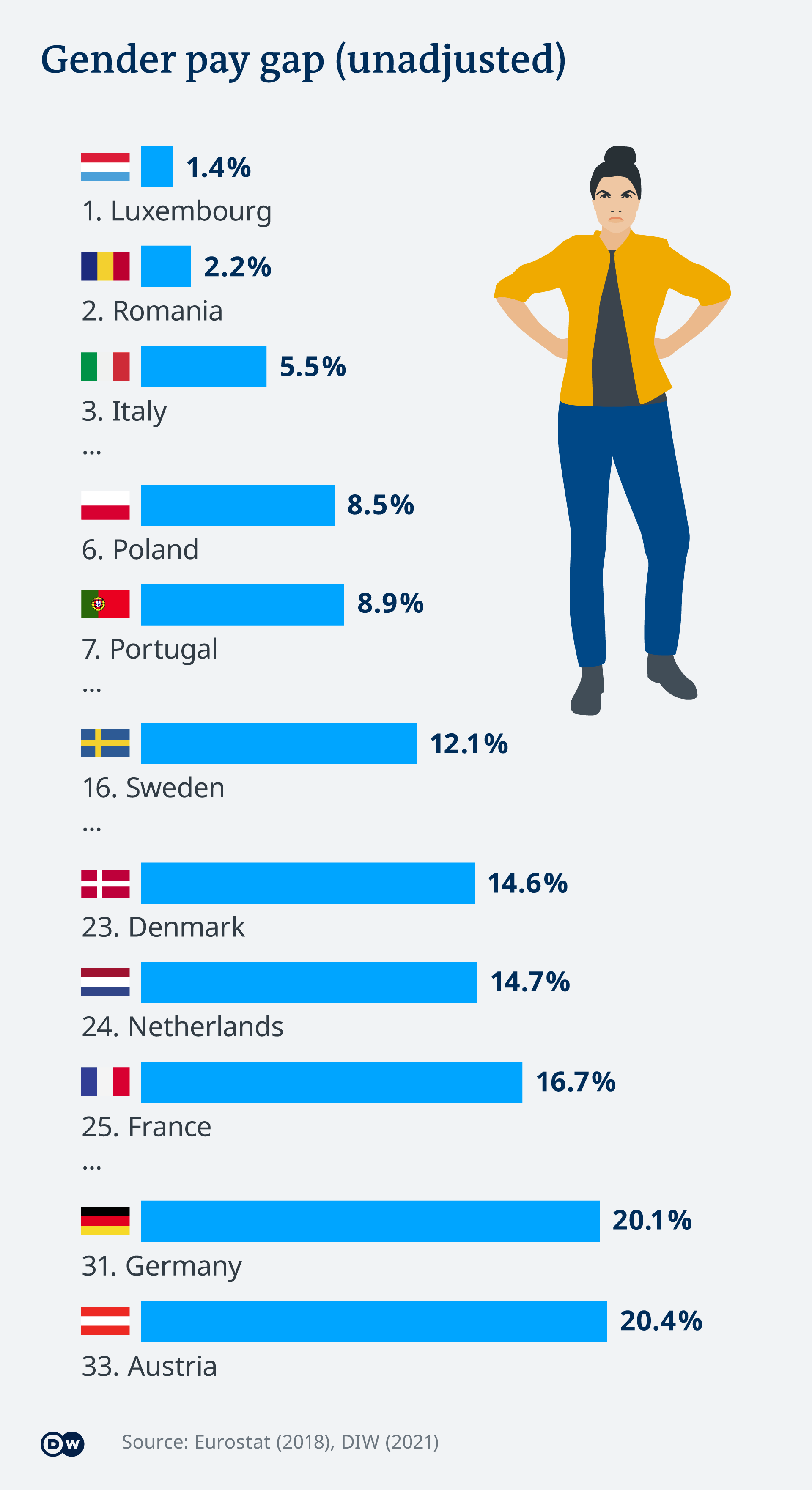 So, let's look at the facts. Can it really be that Romania, Italy or Poland for that matter are that much better than Germany with regard to the gender pay gap? And what about the Scandinavian countries which usually lead similar rankings?

Last but not least, is it a good idea to formulate political demands on the basis of just one figure?

Katharina Wrohlich and Julia Schmieder from the German Institute for Economic Research (DIW) looked at a lot of data and tried to shed some light on all those issues, also because they were unnerved by responses like those mentioned earlier. The figures they looked at are from 2018 and were provided by Germany's Federal Statistics Office (Destatis).

This rate shows what share of women in a given country have a job they get paid for or are actively seeking such a job. "Countries with a low women's labor force participation rate tend to also have a narrow gender pay gap and vice versa," Wrohlich stated.

She added researchers had an explanation for this phenomenon. "Take Italy," Wrohlich said. "There, roughly one in two women has a job," she added, pointing to a women's labor force participation rate of 56% in the country. But in Italy, only women with above-average skills tend to seek a job, meaning that they usually earn well which makes the pay gap vis-a-vis male earners appear rather small.

That's why the DIW researcher recommends comparing only nations with a similar female labor force participation rate. If you applied that, Germany for instance would do better but still not great. 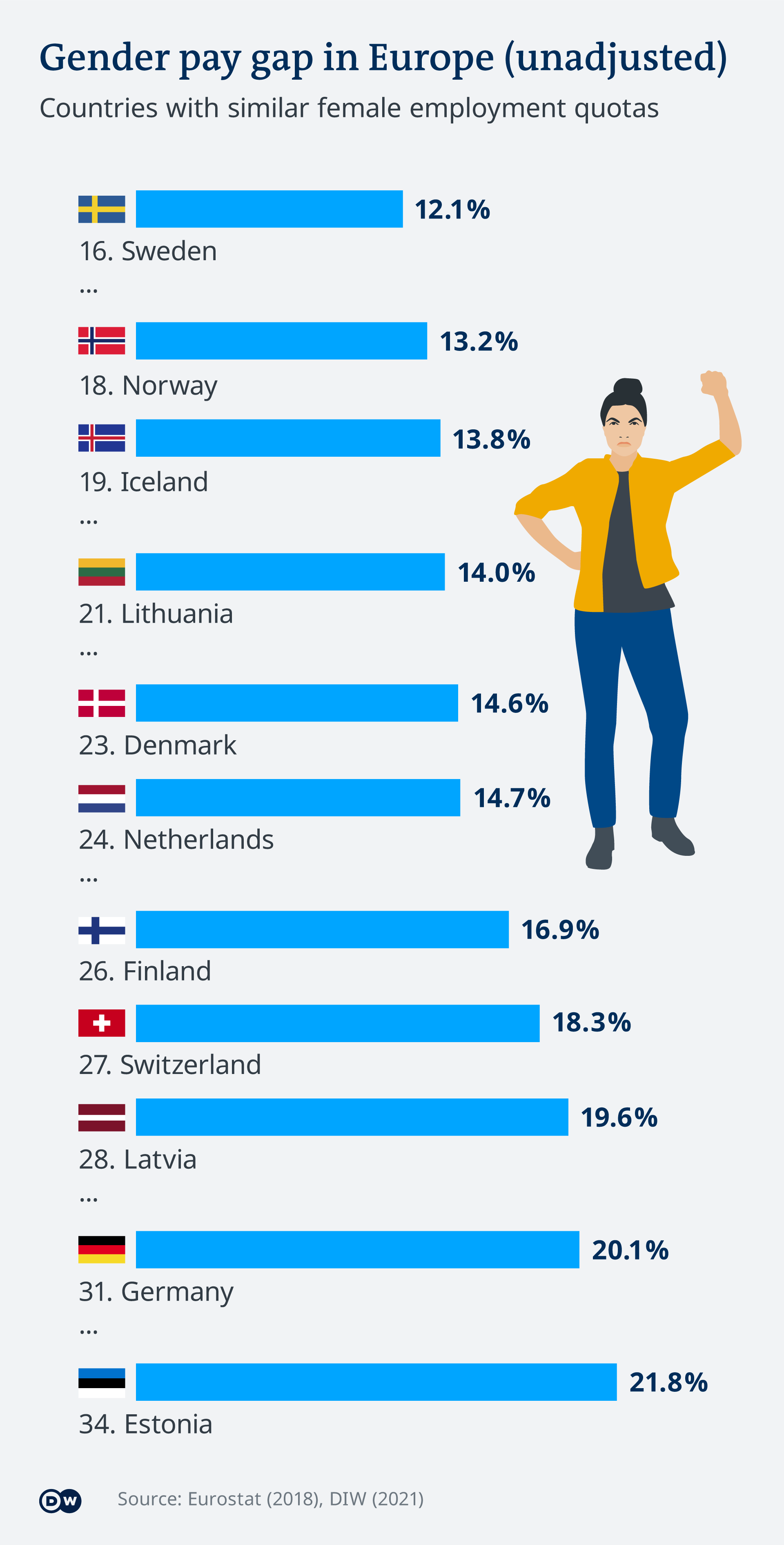 Wrohlich says there are a couple of reasons why Nordic nations are way ahead. First, differences in wages are lower generally, not just between men and women, but also among the various professions. She also points to progressive family policies, making it easier for women to find well-paying jobs.

Among the instruments widely used are parental leave for fathers and extensive daycare services for kids under 3 years of age — something that has been available there for decades while in Germany it was introduced only recently. Wrohlich also says that German tax law which equalizes total income between spouses, also known as income splitting, makes it less attractive for women to pursue a job.

But what about the argument that gender pay gap stats are only useful if they're "adjusted"? Adjusted in this particular context means that the pay gaps can only really mean anything if you compare differences when talking about comparable jobs and skills rather than including differences in pay for the same work.

For Germany, this would mean that the equation would not consider the fact that women here very often work in lower-paying professions, work more part-time and are promoted in their professions less frequently than their male peers. The adjusted gender pay gap for Germany would then be much lower at around 6% officially.

On top of that, there's criticism that many jobs are not incorporated into gender pay gap calculations at all, including public-sector positions, jobs at farms and firms with fewer than 10 employees.

Whose decision is it?

So is it not so gloomy after all? Or to put the question differently, is the nonadjusted gender pay gap above all a result of free individual decisions concerning people's choice of profession and career plans?

Katharina Wrohlich is not convinced. "Do all the women in question really pursue part-time jobs because they want it or do their companions refuse to assume their part of the child care chores," she asked. "Do they really have access to good child care facilities, or are they looking after relatives, because no one else does?"

Wrohlich said several studies had shown that it's not just personal reasons leading to women in leadership positions being still few and far between in Germany. "I view the nonadjusted gender pay gap as statistical data summing up the many inequalities on the labor market," she emphasized.

There still remains the question whether the gender pay gap lends itself to formulating political objectives. Aspiring to arrive at a near-zero adjusted gap would hardly secure the support of all political forces. The European Commission has only just proposed a transparency initiative aimed at enabling employees to better compare their respective wages. 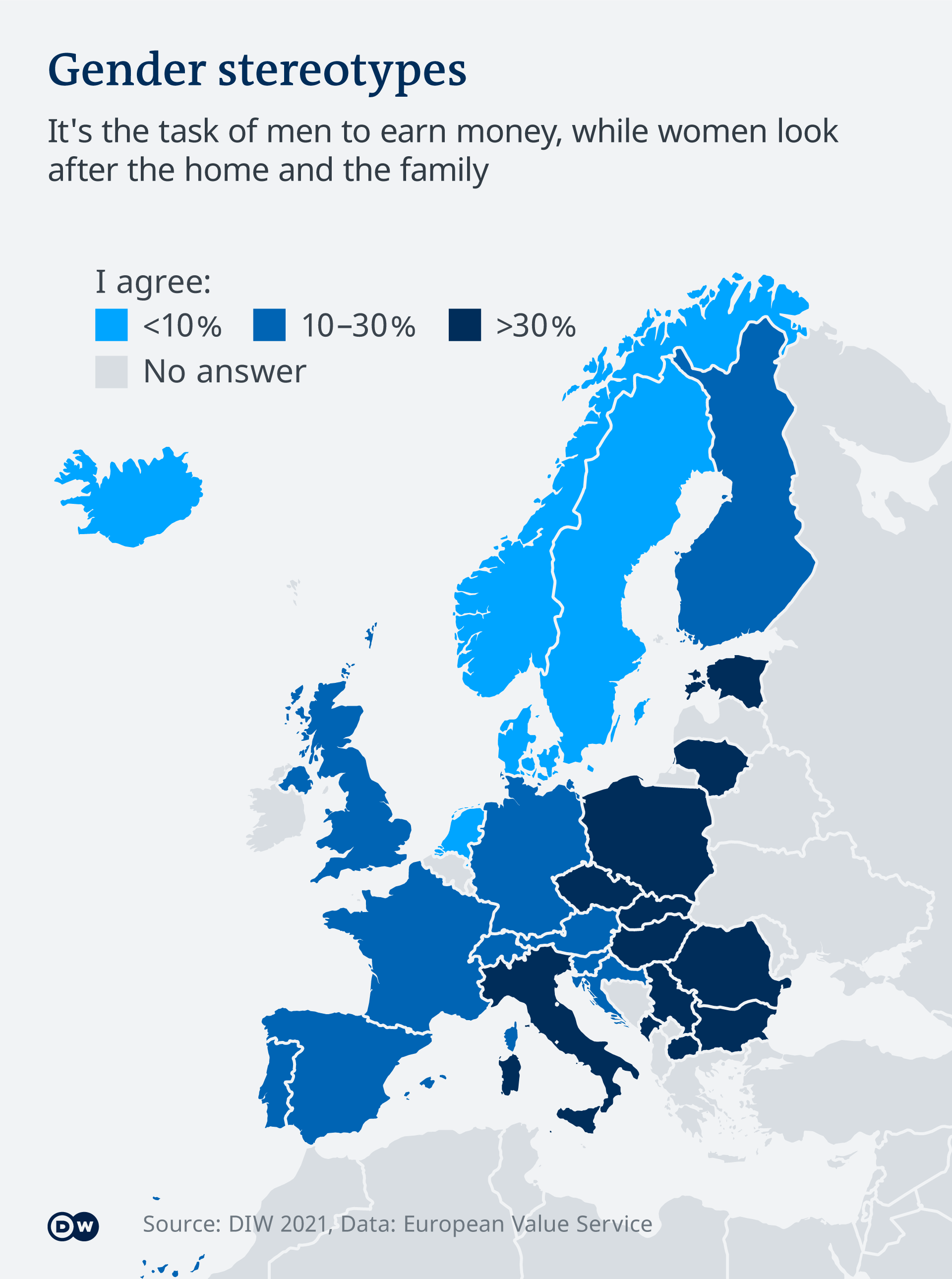 There seems to be little leeway beyond that. Traditional role perceptions are hard to shake, recent polls have shown. In many EU member countries, the majority of people still insist it's the men's role to earn money while women should run the household and look after their families.

Of course, such perceptions can change over time, but can policymakers really accelerate such a rethinking? Experience has shown they will think twice before proposing something that could simply overtax potential voters.