Sweden's male national team has pledged to play the remainder of their matches this year without pay. The Swedish Football Association announced the move following harsh criticism over inequality. 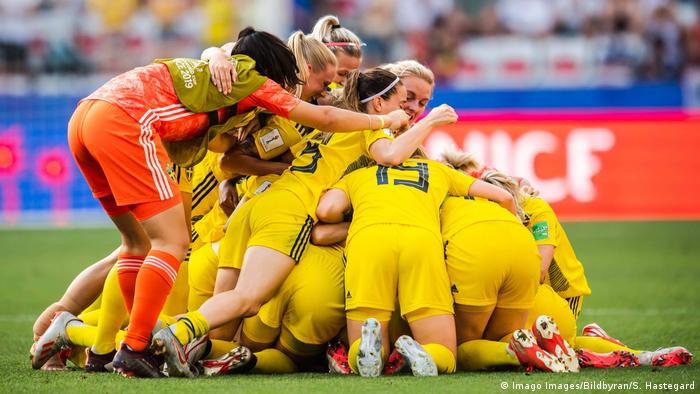 The Swedish Football Association on Friday said given its strained financial situation, the men's national squad "will forgo all financial compensation for their autumn matches ... to make it possible to coordinate negotiations with the women's team."

In August, Sweden's Equality Ombudsman, a government agency that promotes equal rights and fights discrimination, ruled that the football association had not discriminated against the female team by paying them lower wages than their male counterparts.

Kosovare Asllani, who plays for the Sweden women's national team and Real Madrid, said in an Instagram post on Thursday that "the fact that the Equality Ombudsman did not consider the substitute model to be discriminatory, does not mean that it is equal."

Asllani added: "Equality is also a part of the Swedish Football Association's core values…Equality is something we must all strive for."

"If you ask anyone…no one would say they play for the money…But it's about respect and the pursuit of equality," Asllani wrote.

Read more:Can women make a living out of football?

FIFA and UEFA 'far from equality'

Asllani also called on FIFA and the Union of European Football Associations (UEFA) to pay their women and men soccer players equally.

"It is no news that FIFA and the UEFA are far from equality, but I want our union to send signals to FIFA and UEFA that in Sweden we want to change the world for the better as other Nordic countries have done."

At a press conference on Friday, male footballer Emil Forsberg of Sweden's men's national team and RB Leipzig, said: "For me, it is obvious that [pay] should be equal, it is not even a question."

Brazil on Wednesday joined Australia, Norway and New Zealand on the list of football associations who had publicly committed to paying their male and female players the same amount for playing senior international matches. England has also done so since January.

Read more:Why does the Women's Bundesliga look increasingly like the Bundesliga?

In March 2019, the US women's team, sued their federation alleging discrimination over pay and conditions. A judge dismissed their case in May this year but the team have appealed that ruling.