Why does the Women′s Bundesliga look increasingly like the Bundesliga? | Sports | German football and major international sports news | DW | 03.09.2020

Why does the Women's Bundesliga look increasingly like the Bundesliga?

Bayern Munich, Wolfsburg, Barcelona, Lyon, Manchester City. The clubs at the top of women's football in Europe are looking increasingly like their male counterparts. Until recently, Germany was different, why change now?

Eintracht Frankfurt women set for debut on the field

Eintracht Frankfurt vs. Werder Bremen. Freiburg vs. Bayer Leverkusen. Two of the six fixtures that make up this weekend's opening round of the 2020-21 Women's Bundesliga season would sound familiar even to those who'd only heard of the male equivalent. Champions League finalists Wolfsburg and quarterfinalists Bayern Munich add to the recognition for the uninitiated.

But Bayern are the only club in the current 12-team league to have also played in the league's inaugural 1990-91 campaign. Well, sort of. While the Bavarians are the only outfit to have kept their name since then, several clubs have merged with other teams or changed their names, often as a result of link ups with men's sides.

The latest example of this has come from one of the traditional powerhouses of the women's game in Germany. FFC Frankfurt, who won the title seven times, the German Cup a record nine times and have four Champions League/European Cup wins to their old name, became Eintracht Frankfurt Women from July 1.

After falling behind the likes of Bayern and Wolfsburg on and off the pitch in recent years, the move to take on Eintracht's name and brand is further evidence that clubs are convinced that becoming part of a men's side is more beneficial than keeping their own separate identity. Siegfried Dietrich, Eintracht's sporting manager told DW that it became clear to him that the tide was turning after FFC Frankfurt won their last Champions League title, in 2015, and that "a new age had begun" in women's football.

"I knew that this could only have been the last [Champions League title] of a purely women's football club," he said. "We have all always wanted that in the past. And the original FFC Frankfurt was certainly a special case with its business model. But in the face of the structures that were then introduced in England, France or even Spain, there was hardly any chance of it holding its own on the international stage."

This a strategy welcomed at the top end of the game. "It's an important step in the right direction and certainly has a signal effect," said the head of the German FA (DFB), Fritz Keller. "I hope that other clubs will follow the flagship model of the two Frankfurt clubs and thereby advance women's football in sporting, social and economic terms."

While many of Germany's clubs are beginning to think this way, in other major European leagues, it's already standard practice. The 12 teams in England's Women's Super League all have male equivalents in the top two divisions, while the vast majority of teams in the Serie A Women (Italy), Primera Division (Spain) and Division 1 Feminine (France) are partnered with men's teams. The advantages are clear: financial support for transfers and wages, use of existing top class infrastructure and facilities and a readymade fanbase.

Indeed, nearly all of the top 16 men's sides in Europe have a women's team, with Real Madrid's decision to take over a small club previously known as Club Deportivo TACON in 2019 leaving  Borussia Dortmund as the only outlier. The German giants have previously told DW that they are sensitive to the needs and growth of other established women's clubs in their part of Germany, including SGS Essen and MSV Duisburg.

But earlier this year they sent out a survey asking members what kind of women's team they might like to see. Included in the options were taking over an existing team, like Eintracht Frankfurt; a less wholesale approach, such as that taken in a recently-announced link between Bundesliga club Hertha Berlin and traditional women's giants Turbine Potsdam; or starting a new grassroots club with the Dortmund name, badge and history.

Shortly after that, their rivals in the Ruhr district in Germany's west, Schalke, announced they'd be bucking the trend. The Royal Blues want to grow the sport and the club in a more organic fashion.

Schalke will start two senior teams (the blues and the whites) at the bottom of the pile in this season's local Kreisliga A, the lowest division in the region, and add youth structures over the coming seasons. Over 300 women, mostly Schalke fans, attended a series of trial matches advertised online and were whittled down to about 46. Players came from England, France and the Netherlands, with some prepared to take a chance on leaving clubs in the second tier in England to gamble on the Bundesliga name to expedite their progress. But Boris Liebing, the club's sports coordinator who will also coach the 'white' team, explains this is not what the new club are about.

"The aim was to let women's soccer grow in our region, to help strengthen it and not to pick players from other teams and clubs." he said. "We are only picking players who play in our region. We decided that our project will solely be based in the region, to help in the city of Gelsenkirchen — and that’s where we wanted to find our players."

The newly-formed teams will play at the 11,000-capacity Glückauf Kampfbahn, the evocative stadium where the men's team used to play their matches up until 1973 and won all of their league titles. Such surroundings will contrast sharply with those of their opponents, but Liebing hopes their pledge not to poach talent from others has calmed the waters.

"We don’t want clubs to worry that everyone would like to play for the big name, Schalke. We want to be partners for the smaller clubs as well. We said that we're only interested in players who currently don't have a club. We will behave in a very cautious way when it comes to players who might want to leave their club to play for Schalke next year or in the years to come." 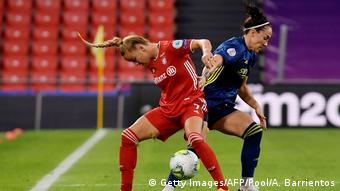 The players won't be paid, though a small amount of money will be provided by Schalke (the sports club rather than the men's football club directly). But, more than any other team at such a level, Schalke's women will attract fans, interest and, in time, better players. Liebing insists that "we're not talking or thinking about the Bundesliga for one second right now." Should progress come though, Schalke will be in a better position to capitalize than most.

A practical move with an intangible cost

The Gelsenkirchen club's focus on identity and grassroots over infastructure and finance remains unusual. Though fans of sides like Turbine and FFC may rue the loss of a particular identity, the advantages of money and structures in the men's game are seen by most of those at the professional level as an advantage that outweighs concerns about loss of identity and history.

"If you are able to do it, I think it's very, very good to be independent," former Germany goalkeer Nadine Angerer recently told DW. "But if you're not, and you want to win a league, I think it's good to link up with a men's team just to give the players everything they need to be successful and to be able to be good professionals."

As Schalke are trying to prove, top level success is not neccessarily the only thing that matters. But, as Lyon carried off their fifth successive Champions League title on Sunday, having overcome Bayern Munich, Paris-Saint Germain and then Wolfsburg on the way, the path to success at continental level appears undeniable. That path looks increasingly like the only one to take to compete in the Women's Bundesliga too.

World Cup winner Nadine Angerer now works for Portland Thorns in the USA. She told DW she welcomes the addition of a new team backed by Serena Williams and says the Black Lives Matters movement has changed her thinking.

Eintracht Frankfurt women set for debut on the field