World Cup winner Nadine Angerer now works for Portland Thorns in the USA. She told DW she welcomes the addition of a new team backed by Serena Williams and says the Black Lives Matters movement has changed her thinking. 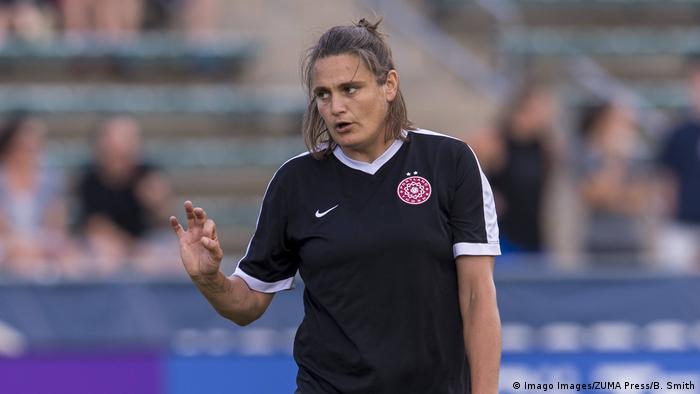 Women’s football is coming to Los Angeles and, for Nadine Angerer, the announcement is cause for celebration. A new team based in LA, provisionally called Angel City, will compete in the National Women’s Soccer League from 2022, and is backed by a long list of celebrity investors that includes Hollywood actresses and former USWNT players.

That the team will bring the NWSL to the Californian city is something that Angerer feels could be of huge benefit to the league. "I think it's very, very important, like the charisma, the advertisement,” she says. "I love the idea and I love that Los Angeles will come into the league. I love everything about Los Angeles.

"A lot of players would like to play maybe in Los Angeles," she adds. "So it's a good argument to bring European players to the US, to our league."

Angel City drew headlines largely thanks to the star cast of financial backers supporting the team. Natalie Portman, Jessica Chastain, Serena Williams and former national team star Mia Hamm are just a few of the famous names attached to the side. "It's big time. And I think this is going to help the league to grow, to bring more value to the league," Angerer says.

The fact that a majority of the new team’s founders are women means Angel City will be a significant outlier. But for Angerer, that detail is less important than how the team is run. "I don't care if it's women, if it's men, as long as they do a good job. For me there's no difference," she says. "But if there are 50 women establishing something really big, I love the idea. I love it and I support it."

The World and European champion does harbor some concern that the big names off the pitch could overshadow the players on it. "This could be a big problem, that as a player you're like, 'OK, it's all about the club. It's not about my personal development as a player,'" she says, though she is quick to reaffirm her support for the project. "Don't get me wrong, the idea and everything is amazing."

Angerer was speaking from Portland, her home for the last six years. It’s a city that has been thrust into the spotlight in recent weeks, becoming the focal point for protests against systemic racism and police brutality, which broke out across the USA after the killing of George Floyd at the hands of police in Minneapolis in May. "In Portland we fight for something and we don't stop," she says. The situation in Portland escalated after federal agents began arresting protestors on the streets, allegedly without identifying themselves as law enforcement. "Since the feds came in it got very violent. But what I really appreciate, in Portland they fight for their rights, they don't stop," Angerer says.

Now a goalkeeping coach with the NWSL side Portland Thorns, Angerer says the situation has opened her eyes to the level of discrimination faced by Black people in the US. “I never thought about how many disadvantages Black people have in life. I never saw that,” she admits. "It's unbelievable how many obstacles as a Black person you have to jump over to get a mortgage, for example. How many stupid comments they get every day. And I'm not seeing it because I'm, sorry, a f****** privileged white person."

The reaction from the sporting world has been unprecedented, with teams from different disciplines and countries kneeling in protest, and displaying slogans in support of the Black Lives Matter movement. The Thorns themselves took a knee alongside opponents North Carolina Courage ahead of a match between the two sides.

Angerer says the Thorns also took action behind the scenes, by discussing racism as a team, and listening to the experiences Black members of the squad have had. They also watched '13th', a documentary about racial injustice in the US by filmmaker Ava DuVernay, together. “I have learned so much and I was naive as well. I thought I was very liberal, I still say I'm very liberal and very left wing. But listening to this makes me even more angry that I was superficial maybe. Or not educated enough,” Angerer says. "I'm very happy that these people spoke a lot about it. And that they actually educated me."

Wolfsburg have clinched their fourth consecutive German women's football title. Their dominance in the women's game in recent years has been comparable to that of Bayern Munich on the men's side.