Portland: US federal officers use tear gas in fresh confrontation with protesters

US federal officers have again used tear gas to disperse a large crowd of protesters outside a courthouse in Portland. Earlier, a judge denied Oregon's request to restrict the agents' actions when they arrest people. 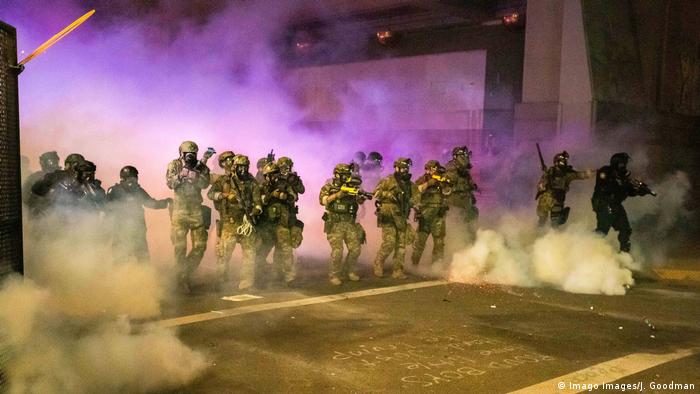 In a bid to break up a large crowd of demonstrators outside the federal courthouse in Portland, Oregon state, federal agents on Friday night once again resorted to the use of tear gas.

Thousands of people had earlier gathered in Portland streets hours after a US judge denied Oregon's request to restrict federal agents' actions when they arrest people during protests that have roiled the city and pitted local officials against President Donald Trump's administration.

By 8 p.m. local time (0300 UTC/GMT) a few hundred people, most wearing masks and many donning helmets, had already gathered near a fountain, one spot where groups meet before marching to the Hatfield Federal Courthouse and facing off with the federal agents there.

Beginning at 9 p.m. the crowd of people, pressed shoulder to shoulder, packed the area and overflowed into the streets as they chanted "Black Lives Matter'' and "Feds go home'' to the sound of drums. 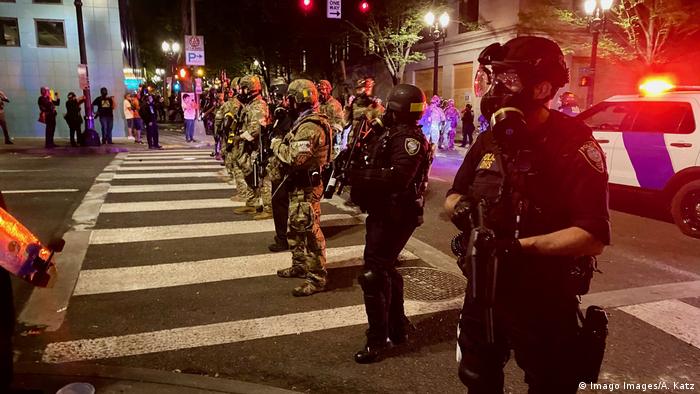 Federal agents have used tear gas, less-lethal ammunition and other force to scatter the protesters

As raucous demonstrations continued in the city, multiple fireworks were shot toward the court building.

The protesters also set fires outside and vigorously shook the fence surrounding the courthouse. Federal agents — deployed by Trump — have used tear gas, less-lethal ammunition and other force to scatter the protesters and tamp down the unrest. Authorities have arrested and charged dozens of demonstrators.

Portland has been rocked by almost two months of protests for racial equality and against police brutality, part of a movement that has swept the United States since the May 25 death of George Floyd, an African American, in the custody of Minneapolis police.

The clashes in Portland have further inflamed the nation's political tensions and triggered a crisis over the limits of federal power. Trump, who is running for reelection on November 3 in part on a campaign of "law and order," has threatened to deploy federal forces in more cities run by Democratic mayors, saying he is concerned about a spike in crime.

Democratic leaders in Oregon, however, say federal intervention has worsened the two-month crisis. The state attorney general has filed a lawsuit to ban the deployment of paramilitary forces in the city of Portland, alleging that some people have been whisked off the streets in unmarked vehicles.

But US District Judge Michael Mosman said the state lacked standing to sue on behalf of protesters because the lawsuit was a "highly unusual one with a particular set of rules."

Oregon was seeking a restraining order on behalf of its residents, not for injuries that had already happened but to prevent injuries by federal officers in the future. That combination makes the standard for granting such a motion very narrow, and the state did not prove it had standing in the case, Mosman wrote.