The US state of Oregon has filed a lawsuit to ban the deployment of paramilitary forces in the city of Portland. It cited the use of unmarked vehicles, plainclothes officers and warrantless arrests of protesters. 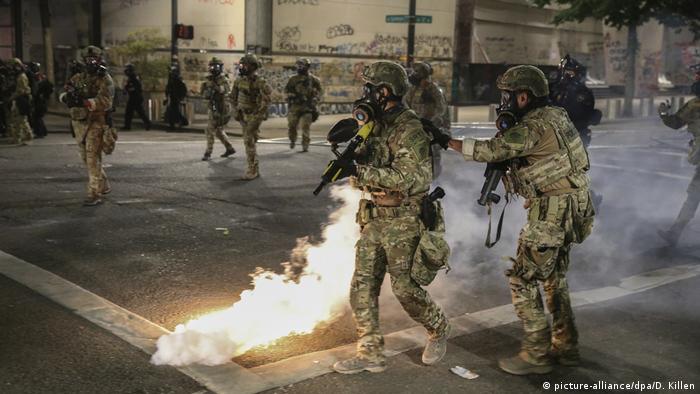 The US state of Oregon's attorney general has filed a lawsuit in federal court to ban the deployment of paramilitary forces, following violent protests and the arrest of demonstrators by unidentified plainclothes officers in Portland, the state capital.

Unidentified federal agents have grabbed people off Portland's streets "without warning or explanation, without a warrant, and without providing any way to determine who is directing this action,” Oregon Attorney General Ellen Rosenblum said in a statement.

"The federal administration has chosen Portland to use their scare tactics," the statement read. "Every American should be repulsed when they see this happening."

Rosenblum added that she was seeking a temporary restraining order to "immediately stop federal authorities from unlawfully detaining Oregonians.”

Local broadcasters reported this week that some agents had been driving around in unmarked vans and snatching protesters from streets, not near federal property, without identifying themselves.

"The current escalation of fear and violence in downtown Portland is being driven by federal law enforcement tactics that are entirely unnecessary," she said.

Invoking a right to protect a federal court in the area during the deployment, the Trump administration has deployed federal agents, including the US Marshals Special Operations Group and a US Customs and Border Protection team in Portland.

On Saturday, Oregon Governor Kate Brown told broadcaster MSNBC that "the situation is unacceptable" and said she had asked for the agents to be removed.

US President Donald Trump has repeatedly decried the disorder, and Homeland Security Secretary Chad Wolf called the protesters "lawless anarchists" in a visit to the city.

Prior to the action taken by the federal government, Mayor Ted Wheeler and other local authorities spoke out against the unrest, saying that a small group of violent activists was overshadowing the message of peaceful protesters in the city.

However, Wheeler said that the subsequent federal intervention is now exacerbating an already-tense situation and has told the authorities to leave.

"This is clearly a coordinated strategy from the White House. It is irresponsible and it is escalating an already tense situation. Remove your heightened troop presence now," he tweeted Friday.

The deployment of paramilitary forces, who are not even clear on whose behalf they are acting and who are not wearing nametags, has only escalated the protests, he said.

Demonstrations against systemic racism and police brutality have taken place on a daily basis in Portland since Minneapolis police killed George Floyd, an unarmed black man, on May 25.

Tensions in the Oregonian city were additionally heightened after an officer with the Marshals Service fired a less-lethal round at a protester's head and leaving him critically injured, on July 11.