The US president offered his first policy proposals on policing and racial inequality since the killing of George Floyd. Trump said the US will not progress by "labeling tens of millions of Americans racists or bigots." 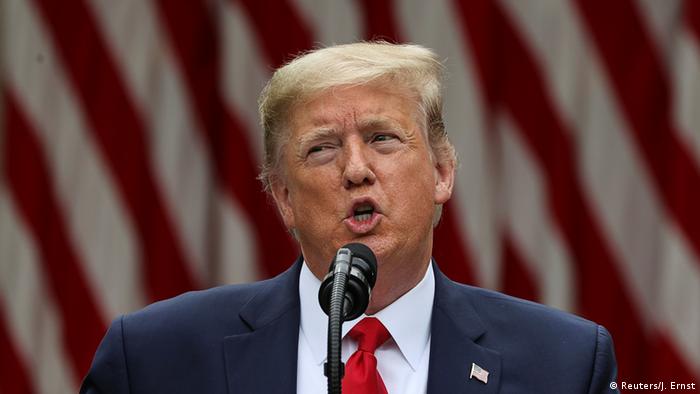 US President Donald Trump on Monday unveiled his first policy proposals for police reform in response to anti-racism and police brutality protests that arose nationwide after the killing of George Floyd in Minneapolis in May.

Speaking at a campaign-style event at a church in Dallas, Texas, Trump pledged more investment into police training and said he is finalizing an executive order to encourage police departments to "meet current professional standards for use of force."

"We must invest more energy and resources into police training, recruiting and community engagement," Trump said in a speech which repeatedly stated his support for police. "We have to respect our police. We have to take care of our police. They are protecting us. If they are allowed to do their job, they'll do a great job.

"We're working on a lot of different elements that have to do with law, order, safety, comfort, control. We want safety. We want compassion. We want everything," he added. "Every child should be able to grow up in a community free from violence and fear."

Trump also said his administration is pursuing economic development of minority communities and is working to address health care disparities.

On May 25, Floyd was killed after a Minneapolis police officer knelt on his neck for nearly nine minutes. His death has fueled the Black Lives Matter movement across the US.

Trump said Americans have to "work together to confront bigotry and prejudice wherever they appear," but the country will "make no progress and heal no wounds by falsely labeling tens of millions of decent Americans as racists or bigots."

"Unfortunately, there's some trying to stoke division and to push an extreme agenda — which we won't go for — that will produce only more poverty, more crime, more suffering," he said. "This includes radical efforts to defund, dismantle and disband the police."

"We're not defunding police," he added. "If anything, we'll go the other route. We'll make sure our police are well-trained, they have the best equipment."

Trump also defended his decision to send the National Guard to parts of the country, including Minneapolis, and his call for police to "dominate the streets."

The German government will look into the alleged "racial profiling" after a senior lawmaker claimed "latent racism" in the ranks of the German police. Other officials warned against equating Germany and the US. (11.06.2020)

Spike Lee: 'Agent Orange is going to go down as the worst US president'