US pays respects to George Floyd at funeral in Texas

George Floyd has been laid to rest in his hometown of Houston, Texas, two weeks after he was killed while in police custody. US Democratic presidential hopeful Joe Biden addressed mourners via a video message.

Members of the public bid farewell to George Floyd

The funeral for George Floyd, a black man whose death at the hands of the Minneapolis police sparked protests around the globe, got underway on Tuesday in his hometown of Houston, Texas.

Dozens of Floyd's family members, most of them wearing white, processed with Sharpton into the sanctuary.

Around 500 guests attended the private event, including politicians, civil rights activists, and celebrities as well as family members of other individuals killed by police officers. Boxing champion Floyd Mayweather, who reportedly covered the funeral expenses, was also in attendance. 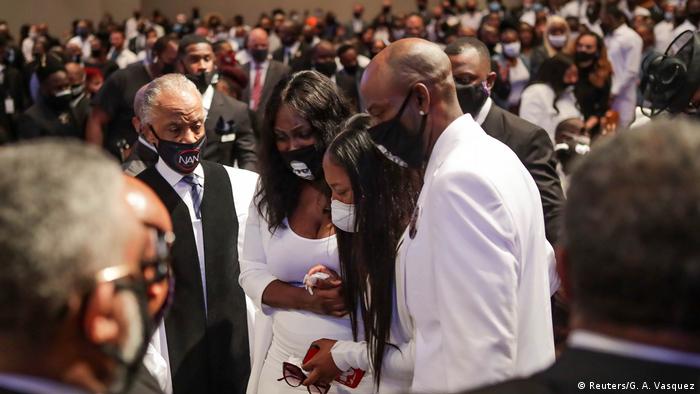 Mourners view the casket at the funeral of George Floyd in Houston, Texas.

A crowd of around 50 people also gathered outside of The Fountain of Praise Church, where the funeral was held.

Live broadcasts of the funeral showed a solemn event that also featured moments of joyous music as well as words of remembrance for Floyd's life.

"Third Ward, Cuney Homes, that's where he was born at," Floyd's brother, Rodney, said to the mourners. "But everybody is going to remember him around the world. He is going to change the world.''

Floyd was buried in the nearby city of Pearland alongside his mother. Following the ceremony, a horse-drawn carriage carried the casket to its final resting place.

Two white horses pulled it, with the gold-colored casket visible inside the carriage.

Cars and buses followed the carriage, while many people honked their horns as they entered the cemetery.

Hundreds had gathered near the cemetery prior to the burial, listening to the funeral service being broadcast from Houston, and playing songs including Public Enemy’s ''Fight the Power'' and Marvin Gaye’s ''What’s Going On.'' Meanwhile, a brass band played as the casket was taken inside the mausoleum where Floyd was buried in a private service for family members.

Local US congressman Al Green echoed his words. "George Floyd changed the world. And we are going to make the world know that he made a difference," he said before the congregation. "We have a responsibility to each one of them to make sure that we do not walk away today after having celebrated his life and not taking the next step... to assure the future generations that this won't happen again," he said. 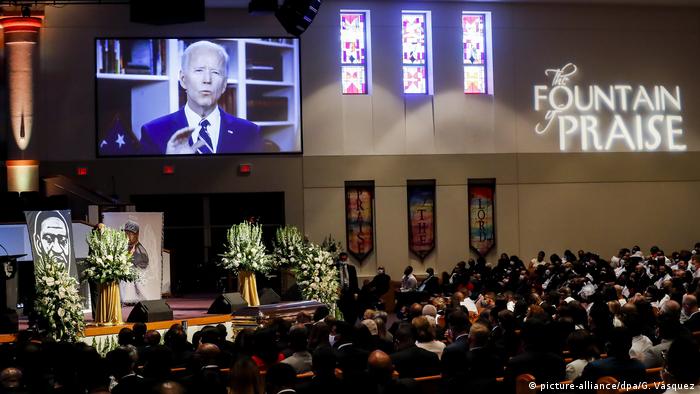 A video address from Joe Biden at the funeral of George Floyd.

"When we get justice for George Floyd, we will truly be on our way to racial justice in America,'' Biden said. "We can heal this nation's wounds and remember its pain," he said.

"Floyd could have been anybody," Sharpton said in his eulogy. "But the reaction was not anything."

"God always uses unlikely people to do his will…God took an ordinary brother, from the third ward, from the housing projects…and made him the cornerstone of a movement that's going to change the whole wide world," he said.

Thousands turn out for viewing

On Monday, a 6-hour viewing in honor of Floyd drew over 6,000 people, the event's organizers said. The memorial service at The Fountain of Praise church was the last in a series of ceremonies honoring the 46-year-old before his burial.

Services were also held over the weekend in Minneapolis and North Carolina.

Calls to defund the police

Floyd's death on May 25 ignited a global protest movement against racism and police brutality.

The unarmed man died after Minneapolis police officer Derek Chauvin pressed his knee on Floyd's neck for nearly nine minutes. The officer had been in the process of arresting Floyd for allegedly using a counterfeit $20 bill.

Protesters have since spoken out against violent policing tactics in the US, with many calling for cities to defund local police departments and redirect the money to other social programs.

Members of the public bid farewell to George Floyd