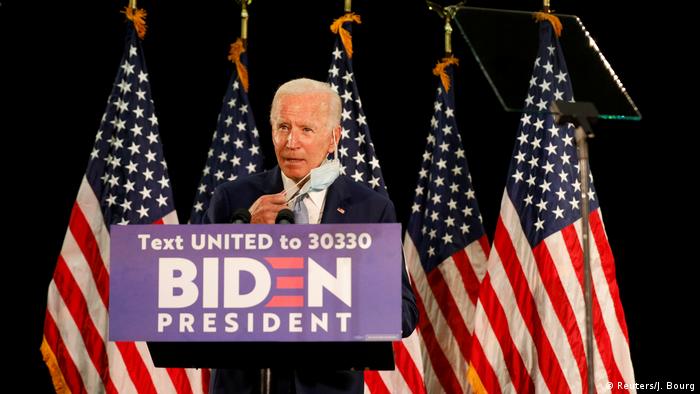 Presumptive Democratic presidential challenger Joe Biden announced late on Friday that his party had "secured" him the minimum 1991 delegates needed to win the formal nomination.

Voting-by-mail — due to the coronavirus pandemic — had left election officials counting until late Friday, local time.

The Associated Press said: "a huge increase" in mailed returns, including those from Indiana, Pennsylvania and Rhode Island, had boosted Biden's backing to 1993 delegates — beyond the 1991 threshold needed within the Democratic Party.

"Together, we can win the battle for the soul of this nation," Biden wrote on Twitter as protests continued over the death of African-American George Floyd in white police hands and widespread outcries over racism.

"I'm proud to say that we are going into this general election a united party," added Biden who had already promised to choose a woman as his running mate.

Read more: Joe Biden commits to picking a woman as US vice president

Biden, who began with a slow start among more than 20 Democratic hopefuls, initially faced a strong challenge from progressive Bernie Sanders, who in April said he was "suspending" his campaign.

Biden, 77, who served as vice president under Barack Obama, went into isolation amid the coronavirus pandemic in mid-March.

He had re-emerged publicly in recent days, pledging to tackle "systemic racism" amid long-felt anger over police killings of African-Americans.

"This is a difficult time in America's history. And Donald Trump's angry, divisive politics is no answer," Biden said Friday, adding:" the country is crying out for leadership."

Trump, presenting unexpected US employment jump data for May on Friday, suggested that Floyd might be pleased.

"Hopefully, George is looking down right now, and saying, 'This is a great thing that's happening for our country'," Trump exclaimed.

Biden retorted from Delaware: "For the president to try to put any other words in the mouth of George Floyd, I frankly, think is despicable."

"It was very clear the President was talking about the fight for equal justice and equal treatment under the law," said Williamson.

Protests have erupted in Australia, Brazil and elsewhere. Donald Trump earlier caused outrage by saying "this is a great day" for George Floyd. Follow DW for the latest. (06.06.2020)

Democratic presidential hopeful Bernie Sanders has told supporters he is suspending his campaign for the party's nomination. His rival Joe Biden was well ahead in the race to take on Donald Trump. (08.04.2020)