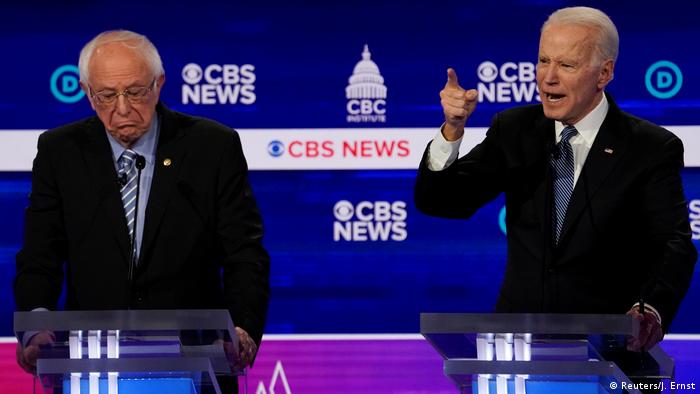 Vermont Senator Bernie Sanders has suspended his campaign to secure the Democratic nomination for president, his campaign confirmed on Wednesday.

"I wish I could give you better news, but I think you know the truth. We are now some 300 delegates behind Vice President Biden, and the path toward victory is virtually impossible," Sanders said in a Twitch video broadcast on his campaign website.

His decision to drop out of the race makes 77-year-old Joe Biden the presumptive Democratic nominee to take on US President Donald Trump in presidential elections scheduled for November.

Biden, vice president under Barack Obama from 2009-2017, held a 1,217-to-914 delegate lead over Sanders before Wednesday's announcement. A total of 1,991 delegates are needed to secure the Democratic nomination.

In response to the news, Biden praised Sanders and promised that some of his ideas would be incorporated into his election platform.

"I see you, I hear you, and I understand the urgency of what it is we have to done in this country," Biden said. "I hope you will join us. You are more than welcome. You're needed."

Sanders' comments to supporters also hinted at a willingness to work with Biden in some capacity.

"Together, standing united, we will go forward to defeat [US President] Donald Trump, the most dangerous president in modern American history," he said.

Sanders said the coronavirus pandemic contributed to his decision to drop out now.

"As I see the crisis ripping the nation — exacerbated by a president unwilling or unable to provide any kind of credible leadership — and the work that needs to be done to protect people in this most desperate hour, I cannot in good conscience continue to mount the campaign that cannot win," Sanders said.

The outbreak in the US has severely limited the Democratic primary process, with 15 primaries rescheduled as a result of the virus. A highly contentious vote in Wisconsin took place on Tuesday, though results are not expected until April 13 in accordance with a Supreme Court ruling.

Sanders was making his second presidential bid after he lost out to Hillary Clinton in 2016. He ran on a left-leaning platform which included universal healthcare and closing the wage gap in the US.

Despite suspending his 2020 campaign, Sanders said he wouldn't give up his delegates and would remain on the ballot for the remaining 27 scheduled primaries.

Trump responded to the news by insinuating on Twitter that Biden was the centrist nominee the Democrats wanted all along, "same as the Crooked Hillary fiasco." He pointed to Elizabeth Warren potentially splitting the more left-leaning Democratic vote on the crucial "Super Tuesday" set of primaries.

Limitations as a result of the coronavirus had also severely impacted the ongoing primary campaigns, with a highly contentious vote taking place on Tuesday in Wisconsin.