The end of her campaign follows big losses in all 14 "Super Tuesday" states. Her withdrawal leaves just former Vice President Joe Biden and Senator Bernie Sanders in the democratic race. 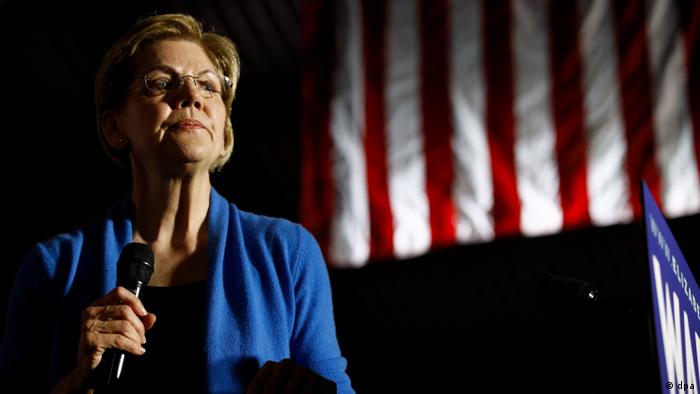 Massachusetts Senator Elizabeth Warren dropped her bid on Thursday, turning the bid for the Democratic presidential nomination into a straight fight between two of the favorites before the process started, Joe Biden and Bernie Sanders.

Her dropout follows a difficult Super Tuesday, in which she finished well behind the two front-runners in primaries in all 14 states, not even managing to claim her home state of Massachusetts.

"I'm suspending our campaign for president," said the 70-year-old liberal lawmaker. "I may not be in the race for president in 2020, but this fight — our fight — is not over," she said.

Warren who campaigned on the platform of having a "plan for everything," saw marked success through the early parts of her campaign, with high ratings in opinion polls and impressive fundraising, raising over $112 million (€110 million) from grassroots contributions.

Warren on the campaign trail

Last summer, she drew tens of thousands of supporters to Manhattan's Washington Square Park, and to many other locations including in Washington state and Minnesota. In her campaign, she called for "structural change" to the American political system to reorder the nation's economy. Additionally, she backed a 2% wealth tax on households worth more than $50 million.

Read more: US Democratic debate rivals slug it out over health care

She also hasn't yet announced an endorsement for either Sanders or Biden, and says she is still assessing who would best uphold her agenda. She is broadly seen as more left-leaning than the moderate Biden, but less of a firebrand than Sanders.

Her candidacy was overshadowed by a previous scandal, in which she released a DNA test in response to goading by Trump, who nicknamed her "Pocahontas" and challenged her to prove that she had Native American ancestry. However, the move offended tribal leaders who said it was culturally insensitive.

Warren started losing support in her bid when she repeatedly refused to answer questions about if she'd raise taxes on the middle class to fund Medicare for All.