The move comes as Minsk enables a huge influx of illegal migration into the EU. Lithuania says Belarus is seeking to harm the European bloc in response to sanctions. 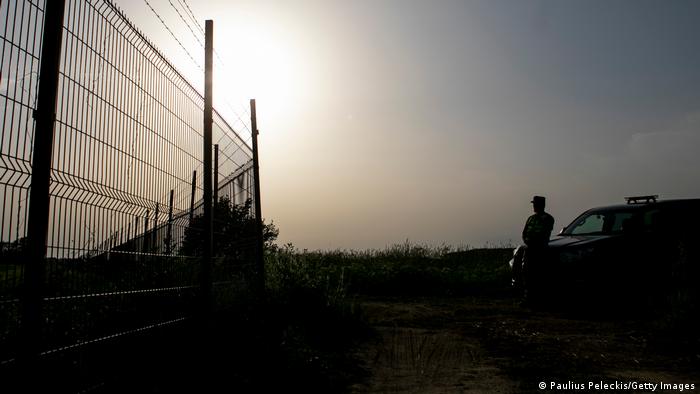 Lithuanian Prime Minister Ingrida Shimonyte on Wednesday announced that her government would build "an additional physical barrier that separates Lithuania and Belarus," and deploy soldiers to control the flow of people entering the country from neighboring Belarus.

The prime minister had previously called the idea "a waste of time." The two ex-Soviet countries share a 678-kilometer (421-mile) border, and a fence would cost an estimated €15 million ($17.7 million).

The apparent change of heart came as the number of migrants crossing the border — an external EU border — has skyrocketed in recent weeks. EU officials believe Minsk seeking revenge for Western sanctions over a number of issues including election rigging and human rights abuses.

The Lithuanian government says it has documented more than 1,300 illegal crossings over the first six months of 2021, as opposed to a total of 81 in 2020.

"We assess the process itself as hybrid aggression, which is directed not against Lithuania but against the entire European Union. The basis was the principled position of the whole EU, as well as Lithuania, on the falsified election results, repression of civil society and human rights defenders," said Shimonyte.

On Tuesday, Belarus President Alexander Lukashenko had threatened to let migrants from war-torn countries enter the EU unhindered. Most of those now entering Lithuania are from Afghanistan, Iraq and Syria.

"Belarusian regime agencies are actively and passively involved in organizing the flow of illegal migrants. The conditions for crossing the border are created deliberately and we tend to see behind that, among other things, the purpose to harm our state and destabilize the situation," said Shimonyte.

The situation, though not new, has escalated in recent weeks. In June, ahead of the recent EU summit, Lithuanian President Gitanas Nauseda told European leaders that Belarus was increasingly using migrants as a political weapon.

What role does Turkey play?

Lithuanian Foreign Minister Gabrielius Landsbergis on Wednesday told reporters that he had summoned the head of Belarus' embassy to demand Minsk stop the flow across the shared border.

Moreover, he said he had asked his Turkish counterpart to help identify migrants coming into Lithuania from Belarus. "A large part of the people [entering Lithuania from Belarus] arrive from Turkey, on Turkish airlines," he said. "We believe that Turkey knows their identities. In cooperation with Turkey, we can easily determine their identities and demand they are accepted by the states they originate from."

"There are travel agencies, direct flights, connecting Minsk and Baghdad for instance, and there are agencies in Belarus and other countries that are responsible for attracting 'tourists' to Minsk," Shimonyte said. She added that most arrivals in Minsk had come on flights from the Iraqi capital.

The government additionally noted that some migrants had boarding cards from Belarus state carrier Belavia in their possession when they arrived at the border.

The government in Vilnius will also convene a special parliamentary session next week to consider approval of draft laws that will "simplify and speed up asylum application procedures, because they [migrants] are also abused."

Beyond facilitating the illegal flow of migrants into the EU, Belarus strongman Lukashenko also threatened to block European goods transported through his country.

Lukashenko, who has ruled Belarus since it became independent of Russia in 1994, claimed that he was reelected in what has been universally decried as a fraudulent election last August — casting the country into turmoil, resulting in months of nationwide protests and mass arrests.  He has repeatedly chafed at Western sanctions over his actions.