Lithuania has detained at least 131 migrants over the past 24 hours, mostly from Africa and the Middle East. The EU believes that Belarusian strongman Alexander Lukashenko is behind the influx. 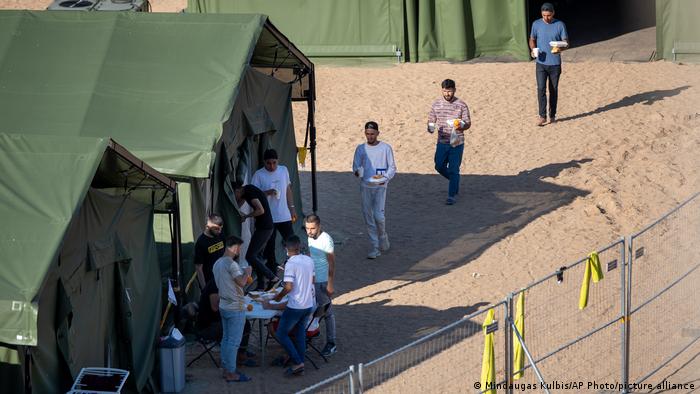 European Council President Charles Michel said Tuesday that the 27-member European Union is "not intimidated" by a large influx of migrants into Lithuania, with the EU leader saying he believes that Belarusian President Alexander Lukashenko is behind the surge.

What did Michel say?

"There is the suspicion indeed that there is a role played by the Belarusian regime," Michel told the media while on a visit to the Lithuanian border region.

"We are not naive in Europe. We are also not intimidated," he added.

Lithuania, which shares a border with Belarus, has detained at least 131 migrants over the past 24 hours, with the majority of them coming from the Middle East and Africa.

Many of the migrants are coming from Iraq, with Michel saying he would meet with the Iraqi prime minister later this week to discuss their repatriation.

"We will also also be in contact with other origin countries to see how ... to cooperate more with these countries to send the signal that it is not possible to come here using illegal tools and illegal instruments," Michel said.

Lithuanian Prime Minister Ingrida Simonyte, who was meeting with Michel, said the surge in migrants was "inspired by (Belarusian) government structures." Lithuania has built new camps to accommodate the asylum-seekers and declared a state of emergency due to the influx.

Belarus sanctions may have prompted rethink on Raman Pratasevich

Migrants on way to 'warm and comfortable Europe,' Lukashenko says

Lukashenko threatened the EU on Tuesday with masses of migrants during defiant remarks to Belarusian government ministers.

"We will not stop anyone," Lukashenko said, referring to the migrants. He said the migrants are on their way to "warm and comfortable Europe."

Lukashenko also blamed the influx on Lithuania, as the Baltic country cut the asylum request process to 10 days.

"If you declare to the whole world that you will register those who make their routes through Belarus even faster, they will keep going," Lukashenko said. "You are opening the door for these migrants even wider."

The Belarusian president threatened to halt the flow of EU goods via his country to Russia and China.

"First: not a step inside the Belarusian market; second: not a step through Belarus either," Lukashenko said.

What's behind the tension between Belarus and the EU?

Lukashenko is angered by recent EU sanctions on Belarus.

The 27-member bloc had retaliated against Minsk after a Ryanair flight carrying opposition journalist Raman Pratasevich was forced to land in Belarus in May, which led to his arrest.

Lithuania is the home of Sviatlana Tsikhanouskaya, a Belarusian opposition figure who ran against Lukashenko in last year's presidential election. She fled the country after the election, and disputes Lukashenko's landslide win.

Lukashenko has cracked down on opposition demonstrators since the election in August, and imposed new restrictions on the media.