A Ryanair jet was en route to Lithuania when it was forced to land in Belarus, where authorities arrested Raman Pratasevich, a blogger critical of Lukashenko's government. EU officials slammed the "unprecedented" move. 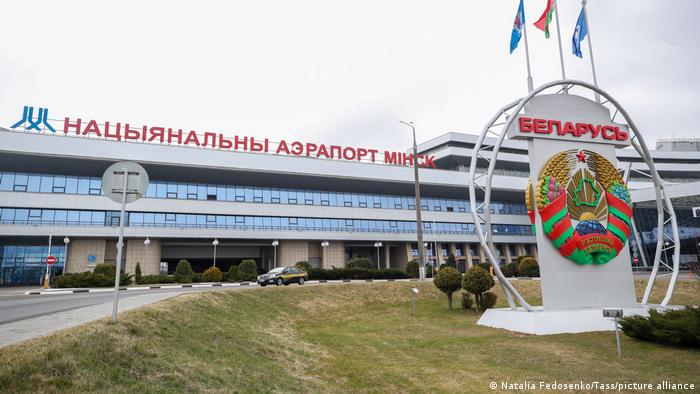 Belarusian journalist and opposition activist Raman Pratasevich was taken into custody at an airport in Minsk after his Lithuania-bound flight was forced to land in Minsk on Sunday.

Opposition figures swiftly criticized the move, which they said was a bid by the government of longtime leader Alexander Lukashenko to clamp down on critical voices.

Lithuania has demanded that NATO and the European Union act to resolve the situation, calling it a "threat to international civil aviation."

The plane was allowed to leave for Vilnius at 8:50 p.m. (1750 UTC) after being grounded for several hours with some 171 people on board. It landed about 30 minutes later in the Lithuanian capital.

Why did the plane have to land?

Belarusian state news agency Belta reported that the plane had been rerouted to Minsk International Airport for an emergency landing due to a bomb scare.

Meanwhile, Pavel Latushka, a member of Belarus opposition Coordination Council, claimed that Belarusian air traffic controllers threatened to shoot down the passenger plane if it did not make an emergency landing in Minsk.

The former Belarus culture minister and diplomat based this claim on "information" that the council had received, but he did not provide further details.

An airport spokesperson told Belta that authorities did not find any explosive devices on the plane.

An opposition Telegram channel Nexta also reported that the plane was searched. The outlet said former editor Pratasevich had been detained.

"The plane was checked, no bomb was found and all passengers were sent for another security search," said Nexta. "Among them was... Nexta journalist Raman Pratasevich. He was detained."

The Belarusian Interior Ministry confirmed that Pratasevich was arrested at the airport. At least four people did not reboard the plan, including Pratasevich's girlfriend. 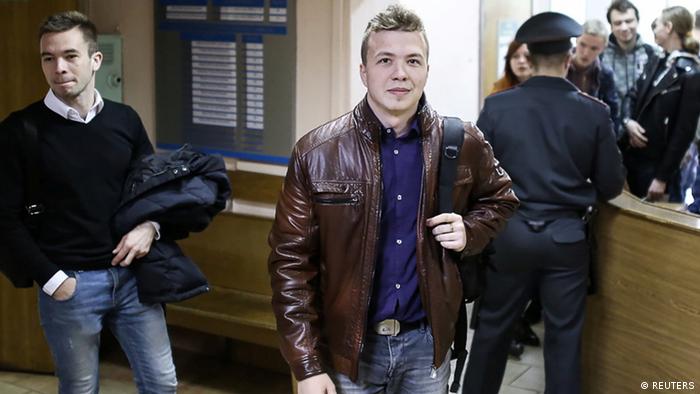 Who is Raman Pratasevich?

Pratasevich is a co-founder of the Telegram messaging app's Nexta channel and helped organize major protests against Lukashenko.

The 26-year-old, who fled Belarus for Poland, faces charges that could carry a prison sentence of up to 15 years.

The Belarus government regards Nexta as "extremist" and has prohibited reposting information from the outlet.

Minsk added Pratasevich to a list of "individuals involved in terrorist activity" last year. He also faces several other criminal charges, including inciting hatred against the government.

The German Foreign Ministry said Belarus should immediately explain both the diversion and Pratasevich's alleged arrest.

The exiled Tsikhanouskaya, currently in Lithuania, urged the International Civil Aviation Organization to begin an investigation.

"It is absolutely obvious that this is an operation by the special services to hijack an aircraft in order to detain activist and blogger Raman Pratasevich,'' she said. "Not a single person who flies over Belarus can be sure of his safety.''

Irish airline Ryanair confirmed the incident and said it had been alerted to a security threat by Belarusian authorities. "Nothing untoward was found," it said.

"Ryanair has notified the relevant national and European safety and security agencies and we apologize sincerely to all affected passengers for this regrettable delay, which was outside Ryanair's control," read a company statement.

The arrest on Sunday was the boldest in a series of moves by Lukashenko's government to crack down on opposition figures and members of the press.

On May 15, a journalist who was on assignment for DW in Belarus was sentenced to 20 days in detention. He'd been arrested while covering a trial of an opposition figure.

Earlier this month, authorities in Belarus carried out a raid on independent media outlet Tut.by, searching their offices.

The campaign targeting opposition and independent media follows mass protests against Lukashenko. The longtime leader was re-elected for a sixth term in a disputed election in August 2020.

More than 34,000 people have been arrested in Belarus since August, with thousands of protesters beaten by security forces.

Protests are more muted these days in Belarus. But despite increasing repression, cultural figures continue to express opposition on World Press Freedom Day.