The German Foreign Ministry has demanded that Belarus explain the diversion of a Lithuania-bound flight and the detention of a journalist onboard. EU leaders expressed shock and said Minsk would be held accountable. 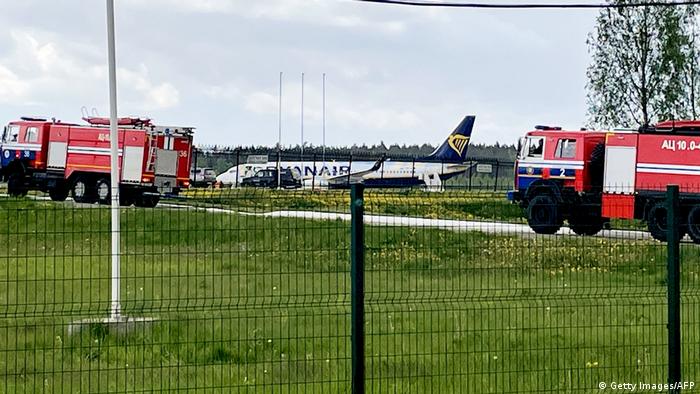 Germany and other members- of the European Union on Sunday demanded an explanation from the Belarusian government after   a Ryanair passenger plane was forced by a military jet to land in Minsk.

The German Foreign Ministry also said answers were needed about the alleged arrest of passenger Raman Pratasevich, a former editor from the Minsk-critical news outlet Nexta.

The blogger was on the Athens-to-Vilnius Ryanair flight when a fighter jet intercepted the plane's path.

The passenger plane's crew asked for permission to land, and Pratasevich — who has been critical of the regime of President Alexander Lukashenko — was detained. At least four people, including Pratasevich's girlfriend, did not reboard the plane when it left Mink for Lithuania.

German Foreign Minister Heiko Maas called for there to be "clear consequences" for the government in Minsk.

"The fact that a flight between two EU states was forced to make a stopover under the pretext of a bomb threat is a serious interference in civil air traffic in Europe," said Maas.

"We are very concerned about reports that journalist Raman Pratasevich was arrested this way," he added.

Miguel Berger, a state secretary in the German Foreign Ministry, had earlier written on Twitter that Berlin demanded an "immediate explanation" of the events.

French Foreign Affairs Minister Jean-Yves Le Drian said the incident was "unacceptable" and called for a "firm and united response."

The United States also strongly condemned the flight diversion to detain Pratasevich calling it a "shocking act" that posed a threat to all the passengers on the plane. Secretary of State Anthony Blinken called for the journalist's immediate release.

Shock from Greece and Lithuania

Leaders of the flight's departure and destination nations, Greece and Lithuania, were among the first to respond.

"We demand all passengers' immediate release. Tomorrow's #EUCO must address the need to step up pressure on Belarus. Enough is enough," Mitsoatakis said in a tweet, referring to a meeting of the European Council scheduled for Monday.

He also demanded action from the Brussels and NATO to resolve the issue.

"I call on NATO and EU allies to immediately react to the threat posed to international civil aviation by the Belarus regime. The international community must take immediate steps that this does not repeat," Nauseda said in a statement emailed to Reuters.

He put forward a list of measures that he plans to suggest at the EU leaders' meeting. These included: recognizing airspace over Belarus as unsafe, a ban on Belarus aircraft at EU airports and an immediate investigation by the International Civil Aviation Organization. He is also calling for "serious sanctions against the regime."

Lithuanian Defense Minister Arvydas Anusauskas vowed to "find out what really happened on that plane." He announced that Lithuania was launching an investigation in a Facebook post.

Some 171 passengers on board the flight — between two European Union member states — were unable to proceed with their journey.

EU officials had earlier warned Belarus that it would be held responsible for the fate of the diverted flight, calling for all passengers to be released.

"We hold the government of Belarus responsible for the security of all passengers and the aircraft," EU foreign policy chief Josep Borrell tweeted.

"ALL passengers must be able to continue their travel immediately," he said, appearing to implicitly be demanding Pratasevich's release.

"ALL passengers must be able to continue their travel to Vilnius immediately and their safety ensured," she said, in a separate tweet. "Any violation of international air transport rules must bear consequences," she warned. She later called the forced diversion a "hijacking" that will have consequences.

ICAO, a part of the United Nations, said the incident may have contravened a long-established international aviation treaty.

"ICAO is strongly concerned by the apparent forced landing of a Ryanair flight and its passengers, which could be in contravention of the Chicago Convention," it said. "We look forward to more information being officially confirmed by the countries and operators concerned."

Irish airline Ryanair confirmed the incident and said it had been alerted to a security threat by Belarusian authorities. "Nothing untoward was found," it said.

"Ryanair has notified the relevant national and European safety and security agencies and we apologize sincerely to all affected passengers for this regrettable delay, which was outside Ryanair's control," read a company statement.

The US Department of Justice alleges Belarus forced the plane to land by way of a fake bomb threat. Minsk subsequently detained dissident journalist Raman Pratasevich, who was on board at the time.