A group of Belarusians are seeking justice in German courts against Lukashenko's regime over alleged torture. Their lawyers say there are at least 100 other victims. 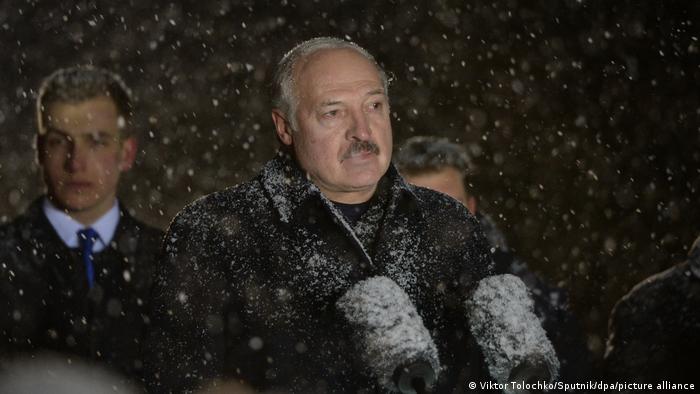 Ten Belarusians have filed a criminal complaint in Germany against President Alexander Lukashenko and his security apparatus, lawyers representing them said on Wednesday.

The four German lawyers allege that their clients were victims of crimes against humanity during the Belarusian government's crackdown on protests since August 2020.

They submitted the complaint on behalf of "torture victims" with Germany's Federal Public Prosecutor's Office in the southwestern city of Karlsruhe, home to the country's top courts.

Lawyer Roland Krause told DW that his clients had suffered torture in Belarus, and that Lukashenko faced a possibly lengthy sentence in Germany.

"They were peaceful protesters in Belarus, in different cities, and they were tortured repeatedly for the mere fact that they participated in peaceful demonstrations," he told DW.

"If a German prosecutor opens a trial and the court condemns Lukashenko, we're looking at a very long court sentence there if actually this happens."

"Overall, the state's treatment of them can only be described as barbaric," the lawyers said, adding that their clients suffered severe health issues as a result.

"The incumbent government is severely oppressing its own population with a crackdown including arbitrary arrests, politically motivated criminal persecution and other forms of repression."

Under the principle of universal jurisdiction, Germany can in theory prosecute crimes against humanity regardless of where they were committed or the nationalities of the victims and perpetrators.

The new rules came into force in theory several years ago, but the very first case came to a conclusion this year, with more filed in the aftermath of the groundbreaking verdicts.

Lawyer Krause told DW that the Syrian case set a strong precedent for this case.

"If Lukashenko or any other member of his regime come to Germany or to the EU and if there's an extradition order, then they will have to stand trial," he told DW.

"We had a recent trial where two members of the Syrian regime who fled to Germany and they presented themselves as asylum seekers, were then processed in a trial because of their actions taken in Syria. So it's a very comparable precedent to the case we have now against Belarus."

Neither Lukashenko nor members of Belarusian security forces are likely to face legal consequences in Belarus.

"There will never be impunity in Belarus, and today's news is a clear example of this," she said in a statement.

In February, the German government offered to host dozens of Belarusian opposition members amid a brutal crackdown by the regime.