How a Syrian torture victim found justice in Germany | Germany | News and in-depth reporting from Berlin and beyond | DW | 24.02.2021 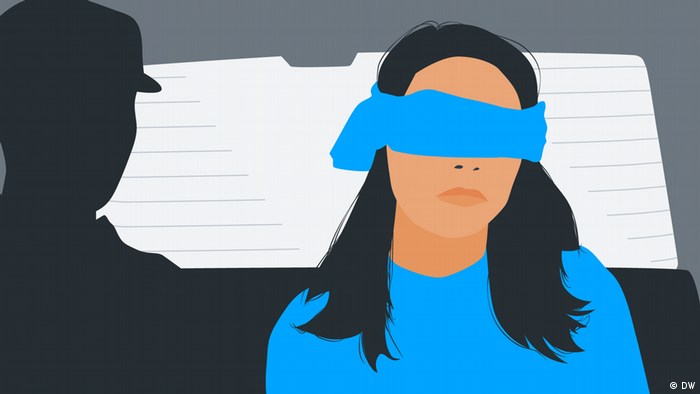 Luna was captured, tortured, then fled — and faced her past in the German city of Koblenz

Luna, who asked that her real name not be used, spent more than 60 days in the courtroom, hoping for answers, for justice — and reliving painful experiences. "I remember what happened to me," she said. "When I have to hear the same details about torture from witnesses, it is very difficult for me."

On the opposite bank of the Rhine from her home in Koblenz is the courthouse that Luna, who has two children, knows so well. In April 2020, two former members of Syria's secret service went on trial there for crimes against humanity. The trial was the first of its kind: an effort to illuminate Syria's brutal system by holding its agents accountable abroad. 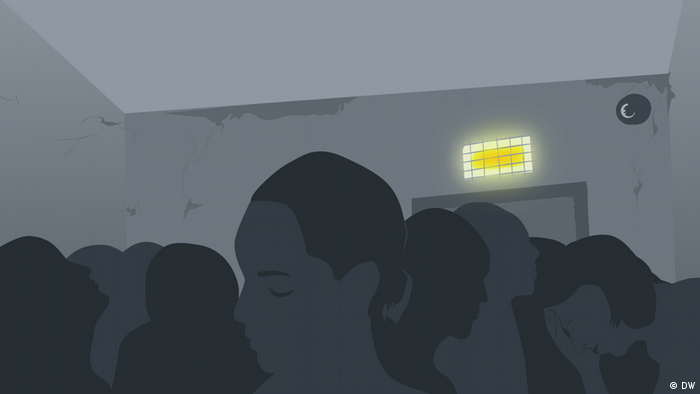 One witness even testified about severe abuse experienced at the hands of a prison guard who also tortured Luna. As Luna talked about her life in Syria during the revolution that gripped her homeland 10 years ago, she was sitting in her small living room in Koblenz, a city on the banks of the Rhine. She talks about the miserable prison conditions, about how she was crammed into a cell no larger than 10 square meters (110 square feet) with up to 20 other women.

Luna was in court on Wednesday, when the first verdict was passed. She hasn't missed a day of the proceedings — not a witness, not an expert witness.

One witness was the man Luna calls the "gravedigger." He appeared in mid-September — anonymously, out of concern for family members in Syria — which is why he was introduced as witness "Z 30/07/19" in the trial. 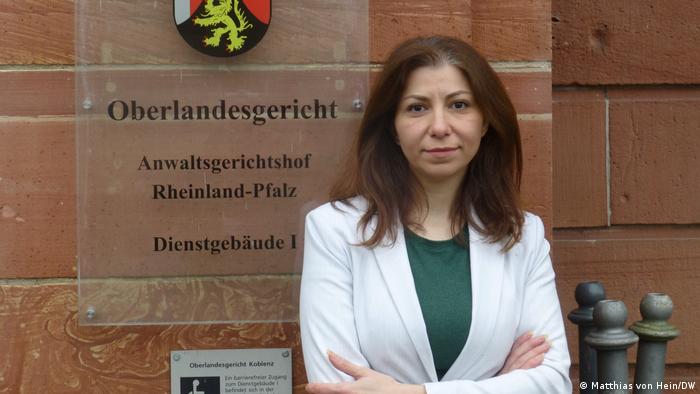 Watfa did not miss a singe day of the trial

The former employee of the Damascus cemetery administration described how, for several years before his escape, he was forced by the intelligence service to transport bodies and bury them in mass graves. He had to do this several times a week, several hundred bodies each time, many showing signs of severe abuse.

Then there were the "Caesar photos": A Syrian military photographer who for two years had to take pictures of people killed in custody for the state's death bureaucracy had secretly made copies. He smuggled them out of the country — and handed them over to the German Federal Prosecutor's Office. Markus Rothschild, a forensic pathologist from Cologne, analyzed tens of thousands of these images of people tortured and starved to death — and presented his findings in the Koblenz courtroom for two days in early November. Luna says the pictures presented in court, and the explanations that went with them, were hard to bear.

Then there was the torture survivor Luna spoke with during a break in negotiations. "He showed me a video that had been taken at the hospital, with all his injuries," she said. "It looked like the Caesar photos, but he's still alive."

Luna was apolitical before the first demonstrations against Bashar al-Assad's regime began in March 2011. "I had no idea what was going on in the country. I was neither for the government nor against it," she said. But then the law graduate started to read: Books about Syrian history; books in which she learned about the crimes of the Assad family; books that made her understand why people are taking to the streets. After four or five months of intense reading, Luna joined the demonstrations. And she got involved in helping refugees who came to Damascus from other parts of the country.

At the suggestion of a friend, Luna became a citizen journalist. For a year, she learned the journalism trade online, with the help of the organization Syrian Voices. She wanted to do something to counter the regime's monopoly on information. Under the pseudonym Luna, she started a program at an online station in mid-2013. "It was about dead people found in Damascus," she remembers. "But nobody knew who they were. I spread information about these people, and when relatives heard it, they could call and say, 'This is my father or son.'"

Luna made the radar of the security authorities in connection with the chemical weapons attack on the Damascus suburb of Eastern Ghouta in August 2013. In collaboration with acquaintances from the suburb, Luna decided to document this massacre. "We took a lot of photos, and we took videos. I used it myself to document 800 names of victims." She sent this explosive material to the Syrian opposition abroad. "It was on a USB stick." That was when the intelligence services began to search for Luna. 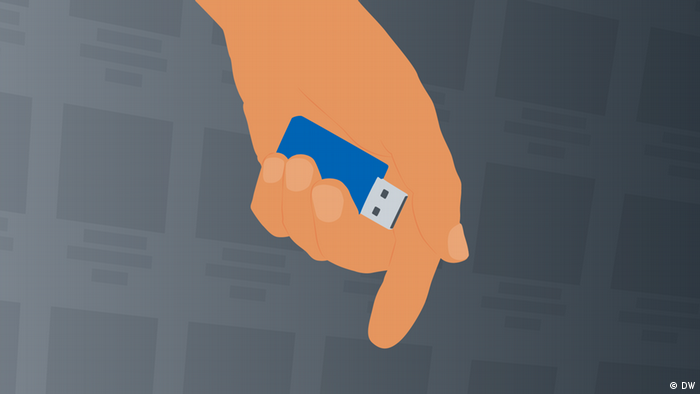 Luna documented what happened to the victims of a chemical attack

About four months later, it happened. Towards the end of 2013, Luna is on the street in Damascus, helping people who have fled to Damascus from other cities because of the civil war that has broken out in the meantime. Three cars pull up, over a dozen security guards get out. One asks for her name, her ID. "Then they took me to one of the cars," she recounts. "They blindfolded me with my scarf, so I couldn't see where we were going. They took me to department 40. That's the department where Eyad A. worked for a long time."

Eyad A. was one of the defendants in the Koblenz trial, who received his verdict this Wednesday.

But, by the time of Luna's arrest, he had already deserted and fled abroad. Later, Luna is sent to the torture prison Al-Khatib of the so-called department 251, called "hell on earth." That was where the second defendant, Anwar R., had been an interrogator. But he, too, had long since left Syria at that point. That's why Luna is not a witness in the trial. She is an observer, reporting on the trial for Arabic media. 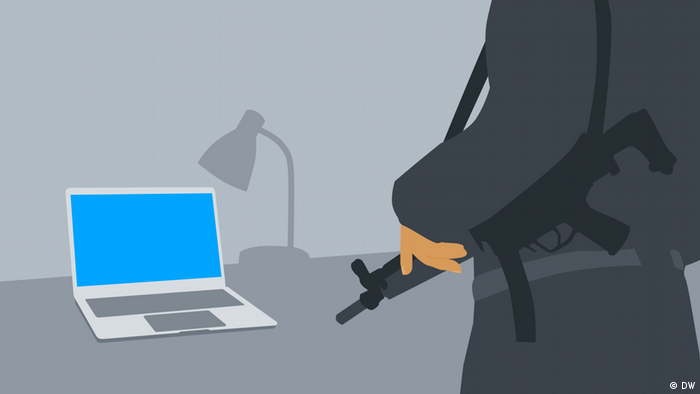 The Syrian secret service obtained the information on Luna's laptop

Psychological terror and fear for her children

During hours of interrogation, Luna denied the accusations. The secret service agents went with her to search her apartment, where her laptop revealed that she was Luna.

Now the agents wanted the names of her helpers. She said there were no others, that she worked alone. "Then one of the officers said, 'Okay, you don't want to cooperate? Then we will arrest your son and daughter!' They took my son in front of me — and that was the worst thing I have ever experienced."

At the same time, she heared instructions over the radio to arrest her daughter at school, as well. "From that moment, I had not seen my children. But during all the interrogations they threatened: 'Tell us what we want to know, otherwise we will get your children and torture them in front of you.' That was the worst thing. Not the torture on me, but the worry about my children; I didn't know where they were, if maybe they were somewhere in the same section."

For about two months Luna was a prisoner of the secret service, in three different departments. Then she was transferred to a regular prison. There she was allowed to contact her family for the first time since her arrest. The secret service had staged a game of psychological terror, she learned: Her son had been taken away only for show, and no one had gone to her daughter's school. 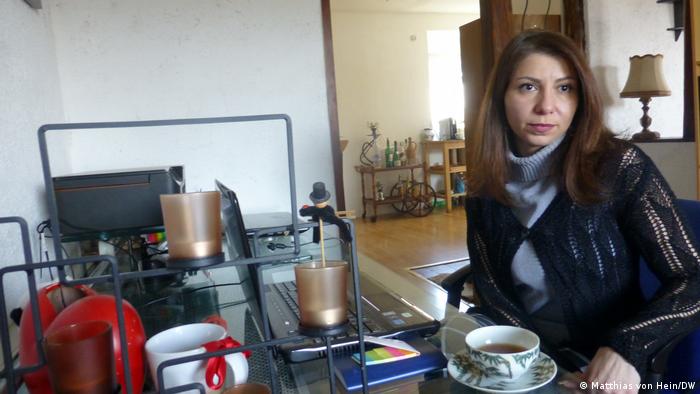 When Luna was released after 13 months in prison, her lawyer advised her to flee. She wanted to stay with her children, but the pressure was so great that Luna ended up fleeing to Turkey. From there, she traveled to Germany via the Balkans, like many other Syrian refugees. Somewhat later, her children also fled to Turkey. After Luna was recognized as an asylum-seeker, she could bring her children to Germany under an asylum regulation that allowed family reunification. And she came to Koblenz, where she now lives.

Then of all places, the western German city of 100,000 inhabitants became the scene of the trial against Eyad A. and Arwan R.. For Luna, "the trial is the first time that we have the opportunity to talk about our experiences. It's only a small step towards justice, but it's very important!" As a journalist, she said, she tries to remain neutral despite being personally affected and has no prejudice against the two defendants. "But of course it is strange to see them all the time," she said. "And that we, as survivors, are now in the strong position; and they, Anwar R. and Eyad A., are the defendants."

Yet the situation of the defendants is not comparable to what it would be in Syria, Luna said as she sipped a cup of black tea, recalling how completely without rights she herself was. And what rights Anwar R. and Eyad A. can claim in Germany. At the same time, it is important for Luna to note one thing: That she in no way wishes for the defendants to experience the same as she or the witnesses who appeared in court did. No one should have to experience something like that.