Demonstrators have turned out for a 13th Sunday in a row to demand Alexander Lukashenko's resignation. The embattled president has warned of repression and said his government "would not back down." 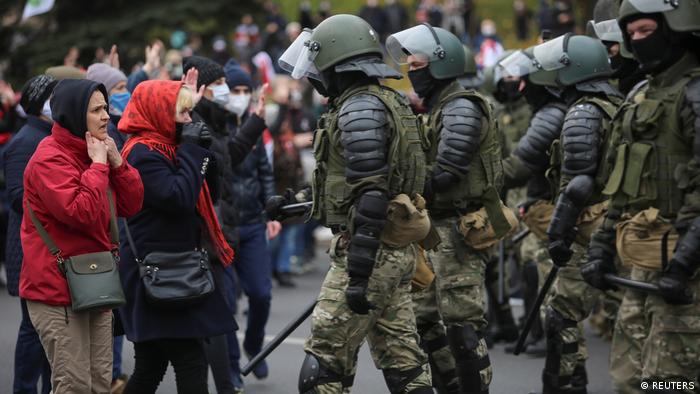 It was the 13th Sunday in a row that anti-government protesters gathered since Belarusian President Alexander Lukashenko won a contested election.

The opposition has rejected the outcome as fraudulent and considers its leader, Sviatlana Tsikhanouskaya, to be the actual winner of the vote.

Belarusian newspaper Nasha Niva reported that tens of thousands of people swept through the capital, Minsk, in Sunday's protest, while Human rights group Visana put the figure at 20,000.

"The situation is really alarming and everyone's mood is tense," one protester who requested anonymity told Reuters via phone.

"Police buses and equipment are constantly driving past the column. It feels like people are ready for any kind of escalation," the protester said. 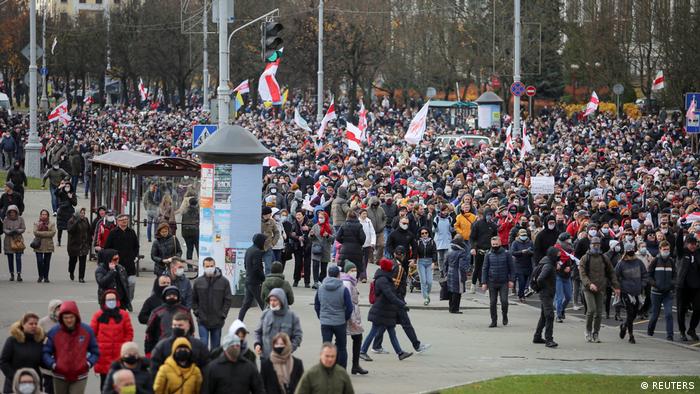 Tens of thousands are said to have gathered in Minsk

Large crowds reportedly gathered in eastern Minsk and headed toward Kurapaty, a wooded area on the outskirts of the capital, where over 200,000 people were executed during Stalinist-era purges.

Protesters carried banners with slogans such as "The people's memory (lasts) longer than a life of a dictatorship'' and "Stop torturing your people!'' connecting Stalin's brutal era with life under Lukashenko.

Lukashenko: 'We will not back down'

Ahead of the march, security forces had already cordoned off several central squares, closed several metro stations and in some cases, mobile internet disruption was reported.

Belarusian President Alexander Lukashenko signaled that he was ready to crack down on demonstrators. "It's enough now. We will not back down," Lukashenko said on Friday.

"If someone touches a member of the military, they must leave at least without their hands," he added in a sign of support to security forces.

Last week, Lukashenko also partially closed the border to the west and replaced his interior minister.

The opposition responded by naming Sunday's protest the "March against terror" while organizers said of Lukashenko: "He has declared war on his own people."

Belarus and Russia have added opposition leader Sviatlana Tsikhanouskaya to their wanted lists on charges of attempting to overthrow the constitutional order.