Belarus threatens to use firearms against protesters

Anti-Lukashenko protests have grown "extremely radicalized," a senior Belarus Interior Ministry official has said, warning that police were ready to use "firearms" if necessary. Hundreds were detained over the weekend. 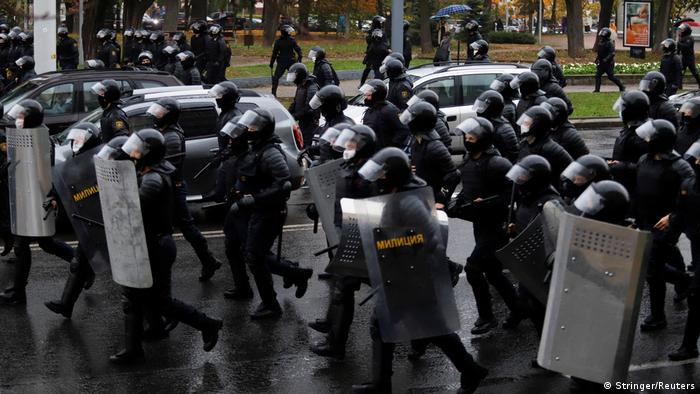 Belarus authorities warned they might use firearms against protesters as the country was entering its third month of unrest over the disputed presidential election.

The police are facing "not only aggression, but groups of militants, anarchists, football fans," said deputy Interior Minister Gennady Kazakevich in a video message posted on Monday.

Commenting on the rallies against strongman Alexander Lukashenko, Kazakevich said that crowds attending the protests were getting smaller, but the rallies were also getting more organized and "extremely radicalized", especially in Minsk. He said the protesters on Sunday were using "rocks, bottles, knives and shivs" during the Sunday marches and then proceeded to set up barricades and burn tires during the night.

"This has nothing to do with civil protest," Kazakevich said, adding that the country's security forces would not leave the streets.

"Members of the Interior Ministry and the internal troops will be using special means and firearms, if necessary," said the official.

Killed by the police or by his own bomb?

While the police have denied using live ammunition against the protesters, many believe at least one rally participant, Alexander Taraikovsky, was shot in the chest by the police in August. The authorities claimed Taraikovsky died because an explosive device he wanted to throw at the police exploded in his hand during clashes in Minsk. Separately, an Interior Ministry official posted online that police fired live rounds at protesters during an August rally in the city of Brest, but later edited the message.

The Belarus police have launched several brutal crackdowns since the protests started, but also varied their response to include periods of relative calm. The clashes this Sunday, however, saw the police use more force than any time since August. Over 700 protesters were detained and 570 were still in custody awaiting a court hearing, the Interior Ministry said on Monday.