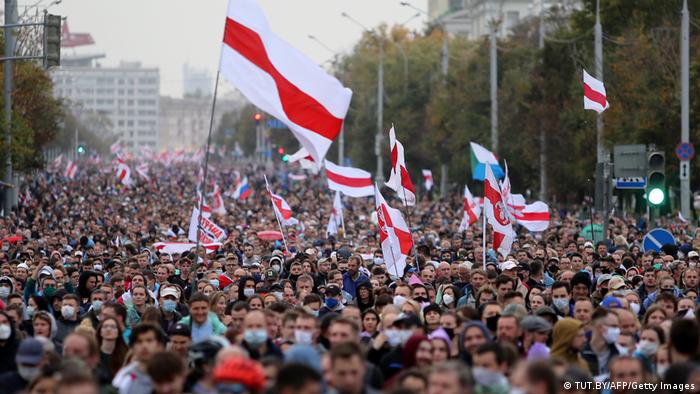 Belarus dissidents have defied all odds, bravely standing up to a state armed to the teeth and willing to deploy brute force to crush all opposition. The dissidents have refused to let themselves be intimidated, and the Coordination Council has worked tirelessly to fight for freedom. The country's dissidents have thoroughly earned the European Parliament's Sakharov Prize.

It was paramount that it be awarded collectively, not just to Sviatlana Tsikhanouskaya but to all of Belarus' opposition figures, otherwise, it would have lost all meaning. These individuals have inspired and lent momentum to the tens of thousands who have taken to the streets of Minsk, week after week, following the country's rigged August election. They have rightly demanded their civil rights be honored and respected — this is what the Sakharov Prize for Freedom of Thought is all about.

Will the prize exacerbate tensions?

Some were reluctant to award the prize to the country's dissidents, fearing it could negatively impact their struggle, even put them in danger. Indeed, some warned that dictator Alexander Lukashenko could instrumentalize the award to claim the opposition is orchestrated by the EU, which would be almost as absurd as his claim that NATO is planning to attack Belarus. Still, no matter how far-fetched, we should not be surprised to know that he is prepared to use any means necessary to vilify his enemies.

Some also warned that the award — named after Soviet dissident Andrei Sakharov no less — could antagonize Russia, which backs Belarus. After all, Russian Foreign Minister Sergey Lavrov has repeatedly framed the protest movement as a manifestation of an ongoing geopolitical struggle over spheres of interest, rather than a genuine struggle for human rights and democracy.

But these skeptics are wrong. The Sakharov Prize sends an important signal to the neo-imperial Russian elite that European parliamentarians are not out to expand Europe's geopolitical influence. Instead, they are signaling that they care about the very values that hold Europe together — about the shared norms that govern Europe as a community.

During the 1980s, Soviet reformers subscribed to these very values. Indeed, Mikhail Gorbachev referred to them when he spoke of the idea of a "common European home." It was in this era that the Sakharov Prize was established. As such, it is fitting that it is now being awarded to Belarus dissidents calling for democracy in what was once a Soviet Republic.

Alexander Lukashenko, who still adheres to a Soviet-era mentality, knows full well what this means. He has been at pains to appear unperturbed by recent events, yet secretly yearns for validation by the West. That his country's opposition movement has now received the Sakharov Prize means the West has distanced itself even further from his regime.

Let us not forget that while Sviatlana Tsikhanouskaya is engaged in political talks in Europe, and while the Belarus Coordination Council is plotting its next moves, many opposition figures remain behind bars. Seven weeks ago, Maria Kolesnikova — a member of the country's prominent female opposition trio — was abducted and thrown in jail. Hopefully, news will get through to her that she, too, has won the Sakharov Prize.

UK: Boris Johnson defies leadership challenge to oust him over 'partygate' 9m ago

Davos: Germany's Olaf Scholz says silence on Ukraine is not an option 4h ago