Lithuania to Belarus: 'Rather watch hell freeze over' than deliver Tsikhanouskaya

Opposition leader Sviatlana Tsikhanouskaya has been living in exile in Lithuania since running against Belarusian President Alexander Lukashenko in contested elections last August. 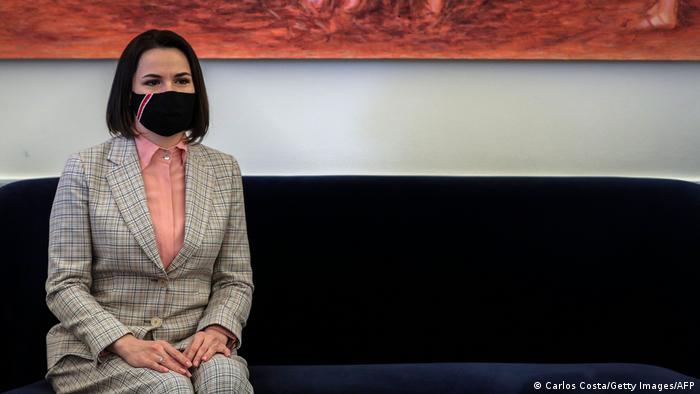 The Belarus General Prosecutor's Office said it had requested that Lithuania extradite Tsikhanouskaya, "to face prosecution for crimes against the governing order, public safety and the state."

Prosecutors accuse her and associates of conspiring to incite riots and occupy government buildings in Gomel, the country's second largest city. Tsikhanouskaya flatly dismissed the accusations.

Vilnius' response to the request was blunt: "We can tell the Belarusian regime that we would rather watch hell freeze over than think about their demands," Lithuanian Foreign Minister Gabrielius Landsbergis said in a statement.

"Lithuania was and is a wall behind which all democratic forces persecuted by regimes may seek refuge," he added.

Who is Sviatlana Tsikhanouskaya and why is Belarus seeking her extradition?

Tsikhanouskaya's husband Sergei, an activist and popular blogger, was imprisoned last summer in the run-up to Belarus' presidential elections, disqualifying him from being on the ballot. Unable to compete in the August 9 vote, Sviatlana Tsikhanouskaya registered in his place.

Alexander Lukashenko, who has been in power in Belarus for 29 years, declared he had won 80% of the vote, proclaiming a landslide victory to begin his sixth term in office. The international community has condemned the elections as unfair and Tsikhanouskaya's supporters contend she won the race, alleging mass fraud.

The country immediately became enveloped in a domestic crisis following Lukashenko's pronouncement of victory. Belarus has since seen months of huge street protests, numerous deaths and more than 30,000 arrests.

Does Lukashenko have any allies?

The intense government crackdown on critics has continued unabated since the unrest began, with journalists and rights activists facing lawsuits. Authorities have also searched the homes and offices of media representatives and human rights workers. Several journalists have been jailed for reporting on the protests and crackdown.

Tsikhanouskaya has been living in exile in Lithuania since late August and has met with EU and other Western leaders during that time.

Despite international condemnation and sanctions on Lukashenko and his inner circle, the strongman leader has refused to step down. Now more than ever, he is an international pariah, befriended only by Russia, with whom his country has a complicated relationship that oscillates between servile and adversarial.