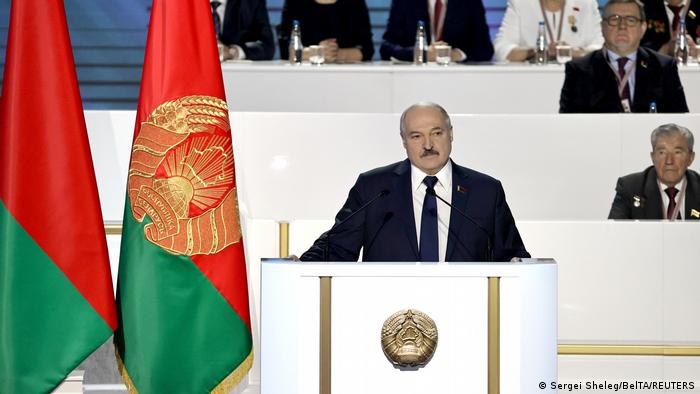 Belarusian President Alexander Lukashenko on Thursday announced that a set of constitutional changes, demanded for months by the country's opposition, would be drafted later this year and put to a nationwide vote in early 2022.

Lukashenko and 2,700 pro-government delegates gathered in a special assembly to discuss political reform and socio-economic development of the former Soviet republic for the next five years.

The strongman leader said the officials should "reflect" on wide-reaching legal changes.

"During this year, the draft Constitution will be ready and will be discussed by society. And early next year it will be voted on in a referendum," he said.

No critic of the regime was invited to the two-day congress.

In front of his assembly of loyalists, Lukashenko declared that Belarus "must remain a presidential republic" even after the end of his rule.

He said there would be a Belarus without him at some point, but "not today, not tomorrow, not the day after tomorrow."

The 66-year-old leader warned that "the time will come, other people will come."

"They are already knocking on the door. I hear that," he said.

According to Lukashenko, the proposed constitutional and legal reforms could be finished by the end of next year. After that, the question of when "he will leave" will be resolved.

Political scientists doubt, however, that Lukashenko's promises will bring about real democratic changes.

"They are not representatives of the people. This has no meaning for Belarusians," opposition leader Sviatlana Tsikhanouskaya told French news agency AFP, adding that Belarusians should expect nothing from this great "cult of a regime."

At the peak of the protests last year, Lukashenko promised to present institutional and constitutional reforms at the sixth  People's Assembly.  On Thursday, however, he asked delegates only to "think" about it, according to the Portuguese news agency Lusa.

Citing a Belarusian government website, topics under discussion at the assembly are only recommendations and not institutional reforms, Lusa reported.

Lukashenko urges country to 'stand up' to foreign-backed 'rebellion'

During the assembly, Lukashenko also slammed the six months of protests against his rule as a foreign-directed "rebellion."

He said that "very powerful forces" abroad were behind the protests. Over the past several months, Lukashenko has repeatedly accused the West of prompting the protests.

"We must stand up to them no matter what, and this year will be decisive,'' he told delegates, reassuring his supporters that he has triumphed over the "Blitzkrieg" targeting his regime.

Belarus "suffered one of the most cruel attacks from outside," he said.  "But the Blitzkrieg failed and we retained (control of) the country."

The 2020 demonstrations marked the country's largest wave of protests since Lukashenko came to power in 1994.