Life under Germany′s COVID curfew: Roaming Cologne′s streets at night | Germany | News and in-depth reporting from Berlin and beyond | DW | 23.04.2021 Leaving your home without a valid reason during curfew is prohibited

At 8:20 p.m., police on duty around the Cologne Cathedral are beginning to get nervous. Whoever doesn't head home now won't make it in time for the 9 p.m. curfew. People are still dancing in the square next to the landmark Gothic cathedral which takes center stage in the 2,000-year-old city situated on the Rhine River in western Germany. A young woman in a blue blazer is spinning in circles as noise blasts out of a PA system.

The music is an eclectic mix. First, we hear the German folk song, "Die Gedanken Sind Frei" or "No one can control your thoughts." After that, Bob Marley sings about freedom in his "Redemption Song." Then the Beastie Boys scream their popular mantra "Fight for your right to party." Tonight's DJ is 36-year-old Ben. He is one of a group of Cologne locals protesting the curfew that was put in place last weekend. 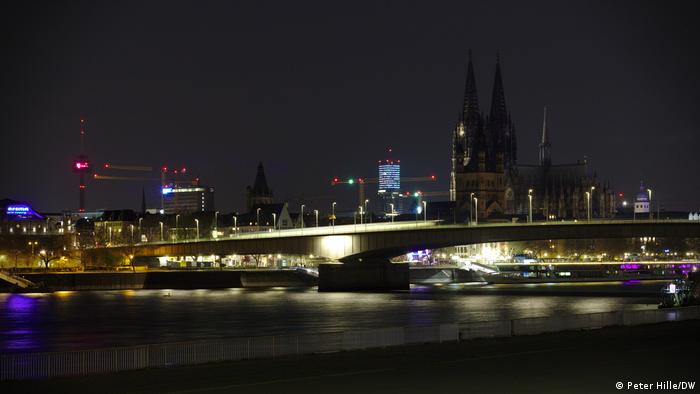 "I'm not doing this just because I want to party," Ben tells DW. "I think some of the coronavirus restrictions make sense. But not a city-wide curfew." He thinks the law isn't an appropriate reaction to the current situation, and it hasn't been scientifically proven to be an effective solution. A policeman approaches Ben, asking him to end the event. The music fades away and slowly the dancers clear out, leaving only doves in the Cathedral Square.

Anyone out after 9 p.m. without a good reason, like being on their way to work, risks being slapped with a €250 ($302) fine. Like many other German cities and districts, Cologne is hoping that this restriction will slow down the spread of the coronavirus.

Whether or not the curfew will actually have the desired effect has been a point of debate in Germany for quite some time. But now a decision has been made. The new nationwide "emergency brake" corona restrictions will apply as of Saturday.

A mandatory 11 p.m. curfew will be imposed on any area with a 7-day incidence rate of more than 100 new infections per 100,000 people. Right now, this applies to 85% of all districts in Germany. But the national emergency brake hasn't been brought into effect yet. That's why the curfew in Cologne begins at 9 p.m. instead of 10 p.m.. 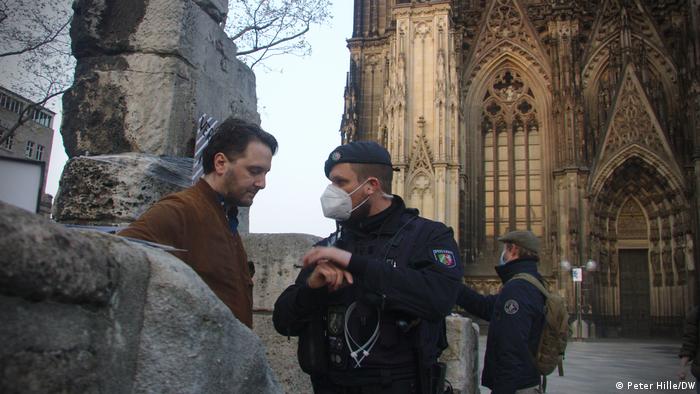 Ben, left, being spoken to by local police in front of Cologne Cathedral

Last Saturday, Cologne's mayor, Henriette Reker, announced a city-wide curfew from 9 p.m. until the following morning at 5 a.m.. That's why at 8:45 p.m. you see people rushing into supermarkets and coming out triumphantly with a bottle of milk or a 6-pack of beer.

Dimitri, Andreas and Tim managed to avoid the last-minute rush. They bought drinks in advance and are enjoying their final hour of freedom atop a concrete wall separating a four-lane boulevard from the supermarket. As the clock strikes nine, they raise their cans and toast to their audaciousness. "No risk, no fun," they say, and then down their whisky-cola, Moscow mule and vodka-energy drinks. They add, "it's better than meeting up indoors." Around them the noise level lowers a few decibels. The cars stop rushing by. And soon the three make their way home. 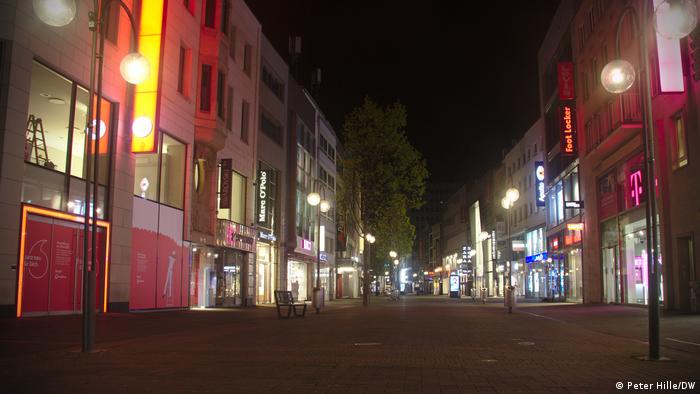 After nine, the streets fill with flocks of food-delivery cyclists. They spread out across the city wearing neon brand-name jackets that match their oversized cube-shaped backpacks. These Lieferando cyclists are the riders of the night in the apocalyptic scenario this ghost town has become. Leon is one of them. The 19-year-old wears a bright-orange outfit as he delivers Chinese food to guests at the Hilton Hotel next to the main train station.

"I always carry an official certificate from my employer. It says my job requires me to be outdoors," he then quickly adds, "but so far the police haven't stopped me." Leon has finished high school and would love to start vocational training to become an electrician, but he can't because of the pandemic. "So, I needed this job to tide me over. But it has its perks. Most people give tips." 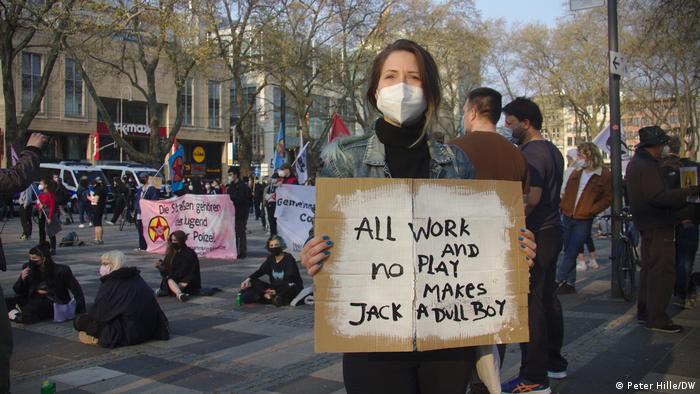 In the early evening, about 300 opponents of the curfew demonstrated at Cologne's Neumarkt

'We have to do everything we can'

It's only 11 p.m. but it feels like 3 in the morning. At Brussels Square you can hear the wind rustle through the trees. Usually, this is a party hot-spot. For years locals have been complaining about the noise levels. Now an old man rambles slowly across the square with his dog. Even the dog is quiet. He is fortunate that walking your dog after 9 p.m. is still allowed. The man says, "we need these restrictions. We have to do everything we can, so that the numbers of infections recede." The dog does his business on the pavement and the two of them make their way home.

Bright blue light emanates from a taxi in the middle of the square. Arta, the taxi driver, rolls down his window and comments, "it's all so sad." He's watching a Japanese Anime film on his tablet. Customers are a thing of the past. "Before the curfew business was okay. But now everything has drawn to a standstill." He says he's worried how he'll make his living if things go on like this, then he returns to the adventures of young Ninja Naruto. 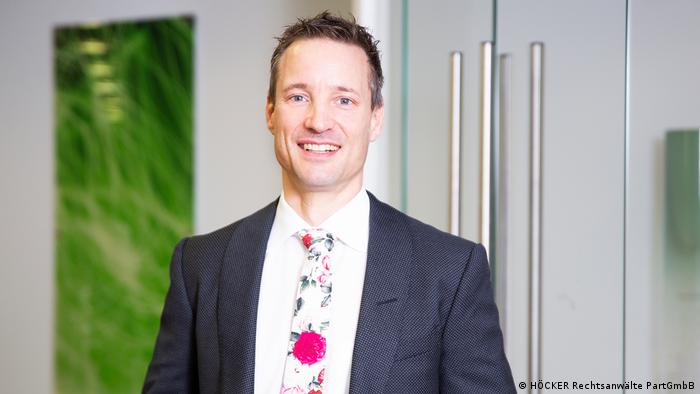 Four streets away, at Friesen Square, the only movements far and wide are the blinking lights of a kiosk sign. On closer inspection, you can see that the blue, red and yellow neon words read "Open 24 hours." But the door is closed. Through the glass, you can see piles of newspapers. Next to the store, there is a five-story office building. The facade is made of marble. Somewhere behind a dark window lies Höcker Law Office. This is where Carsten Brennecke works. He is the lawyer who represented a defendant who sued the Cologne government, saying the curfew was illegal.

"None of us doubts we have to do something about this," Brennecke told DW in a phone interview. But, as with any infringement of fundamental rights, however, he said, you have to ask yourself, "is it necessary and appropriate? Does it help combat the rising infection rate, and does the city have alternate measures that might be equally effective?" For example, Brennecke suggests, a regional curfew for neighborhoods with higher rates of infection. "The question is, is it really necessary that a man like my client in Cologne-Weiden, where the incidence is low, be prevented from shopping or going for a walk? In this case, we don't think so." Brennecke's client will most likely also file a lawsuit in the Federal Constitutional Court against the nationwide curfew.

We move on towards Zülpicher Street. Usually, the bars and restaurants here are teeming with customers. Now it's a ghost town. On one street corner, Chris and Aaron are saying goodbye, which has now become a complicated, but humorous, ritual. They say they were visiting a friend despite the curfew. Chris remarks, "this has been going on for a year and a half. In other countries they've got things under control, but here in Germany ..."

He doesn't finish his sentence, because he sees a police car coming his way. The officer rolls down the window and calls out, "you'll have to go home now. Curfew." No one reacts. The policemen don't think they are being taken seriously. "Let's speed things up here! Get moving!" 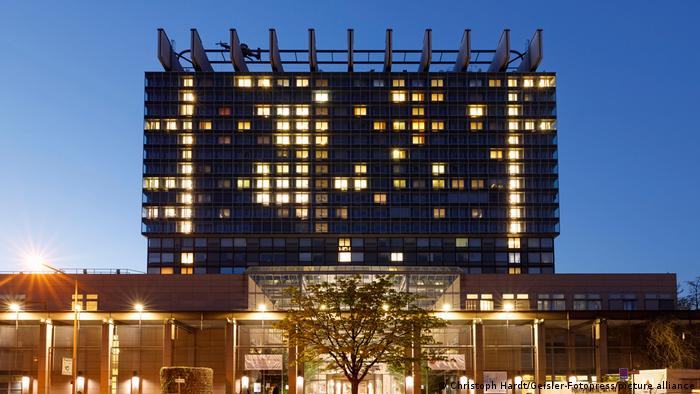 Lights on in the ICU

We ask how many people they have sent home tonight, how many fines they have issued. They don't answer our questions. "No time for this. We have to keep working," says the second policeman, "Contact the press office." The next day, the press office informs DW that "for the most part, Cologne's citizens are complying with the current curfew restrictions in an exemplary manner." So far, officials have only reported 43 curfew violations which resulted in penalties.

Cologne Mayor Henriette Reker said she was convinced "that the curfew and the accompanying reduction in social contact will reduce the infection rate and relieve the burden on hospitals and intensive care units."

German intensive care units have thousands of COVID-19 patients. This is the case at the University Clinic in the district of Lindenthal. The ICU wing of the hospital is a concrete block built in the 1970s. It is 18 stories high and on some of the floors, the lights are still on at midnight. There are currently 127 COVID patients in Cologne's intensive care units, and 81 of them are receiving invasive ventilation. Only 25 beds are still available. Tired nurses are coming off the late shift or are on their way to the night shift. The pandemic has been going on for 18 months — and this has had its effect on nurses and doctors as well as patients.

We return to the city center, passing the main building at the university. The stairway to the cafeteria is set back, hidden by bushes and trees. Music can be heard streaming out of the dining hall. Hip-hop beats pour out of a Bluetooth speaker and reverberate off the concrete walls. A skateboard lies on the floor. Cans of drinks are everywhere. It's just what you would expect to see.

Four young men are enjoying a private party. One of them swaggers down the stairs. He's wearing a blue vest and is carrying his board. He looks about 17. What does he think about the curfew and the fact that he's not allowed to be here? He pulls his mask over his nose and refuses to talk. His mates follow suit.

But at least they are willing to communicate with their hands. The 17-year-old gives us a thumbs-up sign, but rolls his eyes at the same time. He seems to say, "This is so annoying! But you are more annoying than everything else." He throws down his skateboard, jumps on it and rolls off. He uses his other foot to rev up the speed a few times and rides away into the empty streets of the Cologne night.

Germany's shopping streets are starting to fill up once again — but many retailers are afraid they won't survive the crisis. The COVID-19 pandemic has created a huge upheaval in city centers.

Animal rights activists were worried that pigeons would starve as the COVID-19 crisis saw high streets emptied, leaving no scraps to eat. Now the birds in Cologne will not go hungry.