Germany is seeing rising COVID infections and things are likely to get much worse by Easter, according to the country's Robert Koch Institute. Follow DW for the latest. 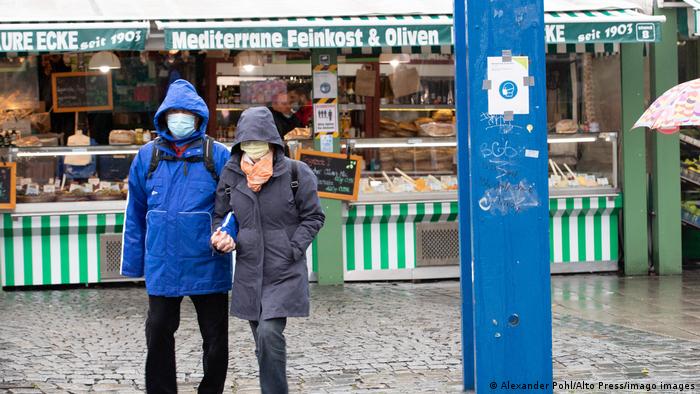 Germany's seven-day incidence rate for coronavirus infections on Saturday continued its rise of the past few days, reaching 76.1 cases per 100,000 residents. That represents a sharp increase over Friday, where the rate was 72.4, itself a marked jump from the day before.

The figure is used as a guideline by German authorities to help determine when lockdown measures should be imposed. A week ago, the incidence rate was at 65.6.

Based on the current trends, however, the Robert Koch Institute also predicted that the incidence could climb much higher in the coming weeks and reach 350 by mid-April. The experts said the number of new infections around Easter would likely be comparable to the one seen around Christmas, with nearly 32,200 infections reported on December 24.

Last week, Germany eased some curbs but state premiers agreed the harshest measures would be automatically reimposed if the rate went above 100.

But two states — Brandenburg and North Rhine-Westphalia — have since said they would not necessarily put strict restrictions in place if the figure is reached.

The Robert Koch Institute reported 12,674 new coronavirus infections in the 24-hour period to Saturday morning — 3,117 more than in the same period one week ago.

The rising numbers come as the EU and Germany's vaccination drive continues to suffer setbacks. On Friday evening, vaccine manufacturer AstraZeneca again announced a cut in the number of doses it can supply to the bloc by the middle of the year. Instead of the 220 million doses originally planned, it said it can deliver only 100 million. The company said the fall is due to export restrictions, but gave no further details. The announcement comes as several EU countries said they were suspending vaccinations with AstraZeneca doses amid concerns about a possible link to blood clots.

In addition, German Health Minister Jens Spahn announced that the newly authorized vaccine from Johnson & Johnson will not be supplied to Germany before the middle or end of April. EU sources said this had to do with US export policies. President Joe Biden has said vaccinations must first be secured for US residents before any surplus of doses is shared with the rest of the world.

Russia has reported 9,908 new COVID-19 cases, taking its total case tally to 4,380,525 since the pandemic began. Moscow accounted for 1,600 of those cases. The government coronavirus task force also said Saturday that 475 people had died of causes related to a coronavirus infection in the last 24 hours, bringing the country's COVD death toll to 91,695.

In St. Petersburg, football fans were offered free Sputnik V vaccines ahead of the game between Zenit and Akhmat Grozny. Several thousand people attended the match at the Gazprom Arena, Zenit's stomping grounds, which can accommodate 68,000 in non-pandemic times. It wasn't immediately clear how many people visited the vaccination point. Vaccines were offered for two hours before and after the game, which Zenit won 4:0. The team said the program would continue until the end of the season.

More than half of Italy will be put under the highest level of coronavirus restrictions from Monday, the government has announced. The regions entering so-called red zone status will include Emilia-Romagna, Lombardy, Piedmont and Rome, with Campania and Basilicata already under the status. The whole country will be considered a red zone for Easter from April 3 to April 5. The restrictions mean bars and restaurants can give only takeout service, people are not able to travel outside their home regions and private visits are limited.

At least four police officers were injured during a banned anti-lockdown rally in the German city of Dresden. Over 1,000 people took part in the march. Security forces also registered 32 criminal offenses during the vent, including aggression and insults directed at police officers.

US health authorities have confirmed at least 68,698 new coronavirus infections in a 24-hour period to Friday, according to a tally by the Reuters news agency. The number of coronavirus deaths rose by at least 1,743 to 533,018. The country is by far the worst-hit in the world by the pandemic.

Brazil police raided an illegal party in Sao Paulo, finding around 600 revelers in a windowless nightclub early on Saturday. Police used axes to break the door down. Brazil is one of the countries hit hardest by the coronavirus, and its weekly death toll reached 12,000 last week, more than any other country in the world.

Jordan's health minister resigned after an oxygen shortage caused the deaths of at least six COVID-19 patients. The patients were treated at the intensive care unit of a hospital in Salt, northwest of the capital Amman. Minister Nathir Obeidat said that the unit had ran out of oxygen for an hour early on Saturday. While the hospital was later supplied with more oxygen, it was too late to save several patients. Jordan's King Abdullah II traveled to Salt to meet with the relatives of the victims who were gathered outside the hospital

The Philippines has reported its first case of the highly contagious coronavirus variant first identified in Brazil. A Filipino returning from Brazil tested positive for the P.1 Brazil variant after 752 samples were sequenced at the genome center, the Health Ministry said in a statement.

The country has the second-highest COVID-19 cases and deaths in Southeast Asia after Indonesia.

India has recorded nearly 24,900 cases in the last 24 hours, the highest number in months. The country of some 1,380,000 people currently has 11.3 million confirmed cases of the coronavirus, the second largest caseload behind the US. Indian authorities report that nearly 158,500 people have already died of the virus. The latest spike of infections fuels fears of a new pandemic surge in the country.

South Korea reported 490 new coronavirus cases on Saturday, the highest number in three weeks. The country has now registered 95,176 infections, with a death toll of 1,667.

Experts in Germany are looking more closely at how COVID-19 spreads among children amid a growing number of outbreaks in kindergartens. Some believe the so-called British variant of the virus is to blame. Read the full story here.

Brazil is one of the countries worst-affected by the pandemic and the health care system is fast being overwhelmed. But its president, Jair Bolsonaro, continues to reject measures to contain the virus. Read more here.

After reports that people of immigrant background in Germany were more likely to contract coronavirus, researchers are trying to find out why. Poverty seems to be more of a factor than ethnicity. Read the DW report here.