Will coronavirus be the deathblow for German city centers? | Germany | News and in-depth reporting from Berlin and beyond | DW | 15.06.2020

Germany's shopping streets are starting to fill up once again — but many retailers are afraid they won't survive the crisis. The COVID-19 pandemic has created a huge upheaval in city centers. 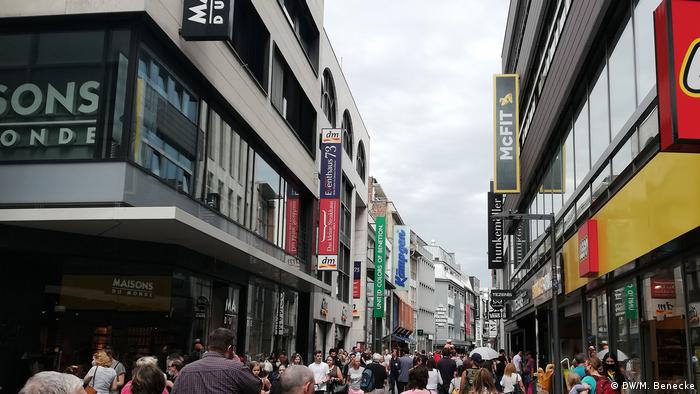 It's Saturday morning in the center of Germany's fourth largest city Cologne. Hundreds of people are streaming past the cathedral and on into the pedestrian shopping zone. Some are wearing masks, while others are enjoying ice cream. A couple stop in front of a shop window displaying brightly colored bikinis and swimming trunks. They hesitate for a moment, then walk on.

"We were thinking of going into a shop just now, but then we thought, 'no,'" says Susen. She's come to Cologne for a little holiday, but wearing a mask in the stores makes shopping stressful. She'd rather just enjoy the hustle and bustle on the street after all those weeks in isolation.

"Yes, the city's packed. There are loads of people out and about," says greengrocer Sven Liebe. He's set up his fruit stall on a corner by the main shopping street, Schildergasse, bananas, melons and peaches piled high. Liebe stands in front, arms crossed. "People aren't in the mood for buying, though. They all just want to wander about." 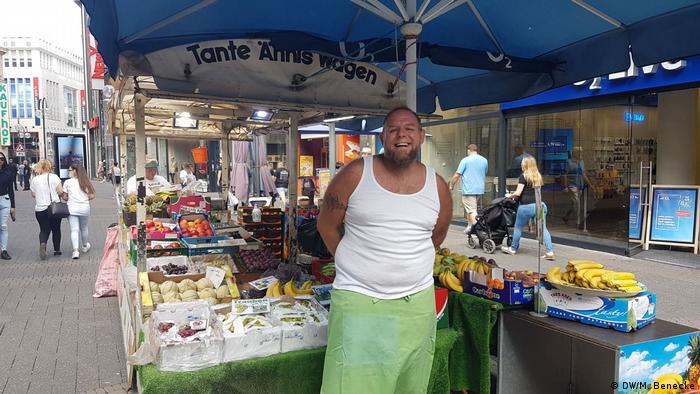 Not many people are buying fruit from Sven Liebe these days

He points at the passersby. It's true: Only a few are carrying shopping bags. These days, Sven and his mother, Petra, always think twice before packing up their fruit and vegetables and heading into town in the morning. "I buy €500 [$570] worth of produce, and at the end of the day I've only made €100," he says. "I'd rather just stay home. I don't need people who are just looking."

Many traders in Cologne are struggling to survive. "There are still far fewer customers going into shops than before the coronavirus crisis," says Stefan Genth, managing director of the German Retail Federation (HDE). "In many places, sales are not at a viable level."

According to an HDE survey of 400 business all across Germany, more than a third of retailers dealing in products other than groceries are worried they won't survive the massive drop in turnover caused by the pandemic.

Nearly 80% of retailers are pessimistic about the future, and they're anticipating a wave of insolvencies in the retail sector as a result of the crisis. That could change the face of Germany's city centers. "Without commerce, the city centers will die," says Genth.

The outlets of major chain stores line Cologne's main shopping thoroughfares, but it's on the side streets that you can find the little boutiques, florists and jewelry stores, where a chat with the proprietor is all part of the exchange. And today, the salespeople have plenty they want to get off their chests.

Independent stores on the brink

"We've just done our half-yearly accounts," says Hans-Georg Reifenrath, standing behind the counter of his gift shop, Traumstern. Compared with the same period in 2019, turnover is down 61%. "That's basically a deathblow. You can't make up six months' worth of losses."

Reifenrath did receive emergency aid from the government, but it wasn't much help. "That was barely enough to cover the rent," he says, adding that it will be much harder for small shops to make it through the crisis. Unlike the major chains, they don't have the financial reserves or online sales to keep them going.

Read more: How nightly applause saved my sanity as a new Berliner

Reifenrath is desperately hoping for more support from the government — along the lines of the French model, for example. In France, rent or gas and electricity costs have currently been suspended for midsized businesses that are in financial difficulty.

Even if they manage to survive the pandemic downturn, it's still going to be hard for many businesses to make ends meet. "The uptick in online shopping can't be walked back, which means there will be a complete lack of sales in city centers," Thomas Krüger, an urban researcher, said in an interview on June 11 with tagesschau.de. "We're going to see a huge number of vacant stores in the coming weeks and months."

But that won't be the only serious setback for German city centers. "We're also going to see fundamental changes in office usage," said Krüger. "Work structures in office-based occupations, which currently make up 70% of workplaces in large cities, are going to change considerably as a result of the crisis and people working from home."

But that doesn't necessarily mean downtown streets will be lined with empty stores and deserted offices in the coming years, said Krüger. "If rents go down, there will be a chance for business models that aren't currently as strong as the big chains: fusion concepts, for example, that combine the food industry, art, sales, and office space," he said. "They can all be brought together in one place in a really exciting way: completely different markets offering completely different things."

Berlin is quickly revamping its streets amid the coronavirus crisis in hopes of creating more and safer spaces for cyclists and pedestrians. But Germany is car country, and not everyone is happy. (18.04.2020)

For most people, depression and anxiety disappear after Covid infection, but others are plagued with severe neurological symptoms for the long term. Are we any closer to knowing why people’s outcomes differ so much?