Cities around the world have been at a standstill, trying to stop the spread of COVID-19. But with lockdown measures gradually lifting, places like Brussels are trying a new climate-friendly approach to mobility. 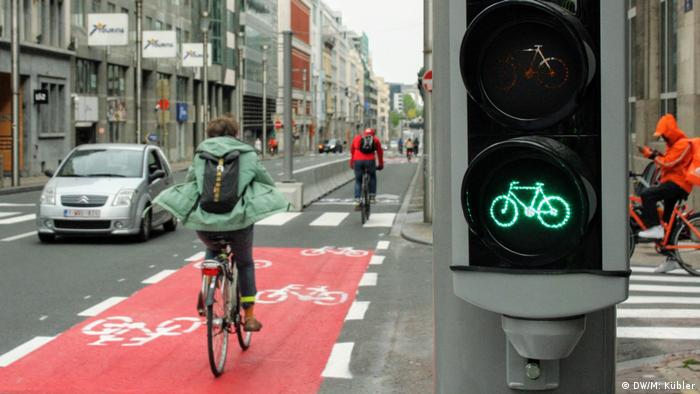 After weeks of strict coronavirus lockdown measures, businesses and schools in cities across the world are cautiously beginning to reopen their doors. Empty streets are once again filling with cars, urged along by the familiar pattern of the daily radio traffic report.

Some cities are hoping to take advantage of this enforced pandemic pause to usher in environmentally friendly mobility changes, aiming to lower transport emissions and kickstart a shift in how the public gets around — and at the same time, help those who are heading back to work and school keep up the physical distancing.

Brussels began the first phase of its post-lockdown measures on May 4 by rapidly expanding the city's cycling network by some 40 kilometers (about 25 miles), with regional authority Brussels Mobility calling on citizens to choose bicycles for short journeys and "avoid clogging up public transport." The new bike lanes, set up in areas where the region can act without relying on other municipal partners, are enforced with road markings and concrete barriers.

"A big part of the cycling infrastructure we are putting in place is here to stay," said Brussels Mobility spokesperson Steven Fierens. There would still be some "finetuning," but he said the temporary measures were in line with the 'Good Move' mobility plan, an urban strategy for the next decade already adopted in March by the regional Socialist-Green coalition government.

In certain traffic-heavy areas — like the Rue de la Loi, a key thoroughfare that runs through the EU district and is often jammed with cars — an entire lane will be given over to cyclists, leaving only three for cars. On the night before the first lockdown measures were relaxed, workers were busy reshaping the road.

In other areas of the Belgian capital, including the city center surrounded by the small ring road, priority has been given to pedestrians and cyclists and speeds are limited to a maximum of 20 kilometers per hour (12 miles per hour). The new measures will remain in place "until further notice," with the city studying the results, said a spokesperson for Brussels Mayor Philippe Close.

Thyl Van Gyzegem, a mobility expert with regional NGO Inter-Environment Brussels (IEB), was somewhat more pragmatic. "It's unlikely that the pandemic will significantly change the main travel dynamics in Brussels, at least in the near future," he said. Van Gyzegem pointed out that more than half of Brussels residents already relied on something other than a car, and that bicycle use and walking had been steadily increasing in recent years.

And he didn't think Brussels' notorious traffic jams would disappear any time soon, with high rents continuing to push people out to the suburbs and beyond, forcing many to rely on cars for their commutes. In addition, the Belgian love affair with the fiscally-advantageous company car — in 2019, a record 315,557 new cars were registered in the country, 7% more than in 2018 according to the Belgian Automobile and Cycle Federation — remained a "very strong incentive" to use private vehicles, he said.

"For this reason, the Brussels Region cannot, on its own, and on the sole basis of infrastructure works […] revolutionize mobility," Van Gyzegem told DW, though he did expect the region's "tactical move" would bring some transport benefits in the long term. 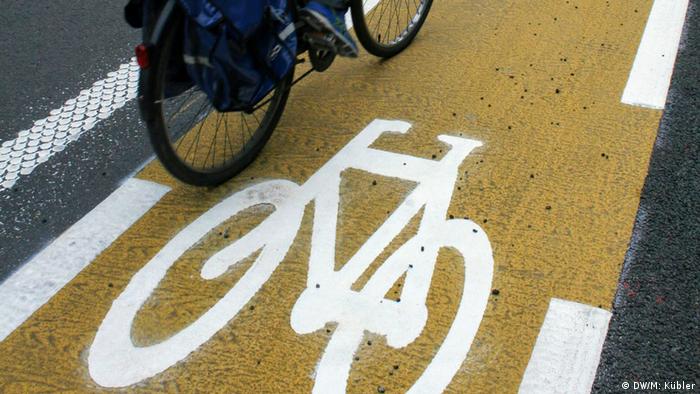 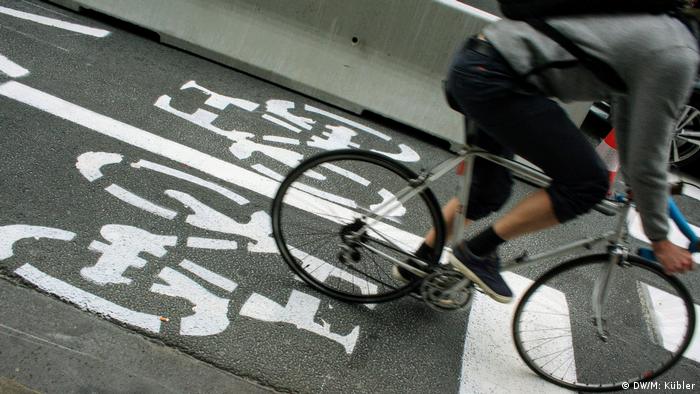 Using crisis as an opportunity

Other cities around the world have also been using the pandemic to try out alternatives to automobile-based mobility. In London and other major centers, for example, health workers have had temporary free access to electric bikes courtesy of bike retailers and ride-sharing companies.

In the Italian city of Milan, particularly hard hit by the COVID-19 pandemic, officials have announced plans to convert 35 kilometers of streets into more cycling and walking space, with lower speed limits, makeshift bike lanes and wider sidewalks.

Some provisional moves have brought about permanent change. After widened bike lanes began popping up in Berlin and other German cities — an act the opposition Free Democrats called "an unnecessary provocation" by the bike lobby during the crisis — the federal government introduced nationwide reforms that banned drivers from stopping on bike lanes and required a minimum 1.5-meter gap between cars and cyclists, a measure previously only recommended. 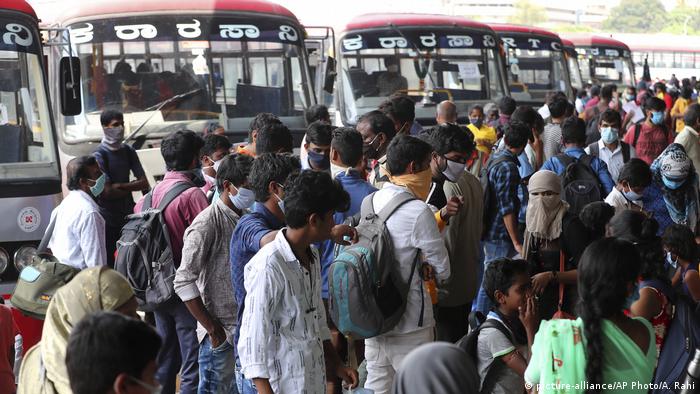 With overcrowded transport networks, physical distancing can be a challenge in some cities

But while these post-lockdown measures may be signs of hope for cycling campaigners they remain difficult to implement in many cities in the global south, especially in rapidly expanding megacities in Africa and Asia where billions rely on crowded public transport or shared mobility such as taxis and other private vehicles.

An ongoing research project in Nigeria highlighted by the Transformative Urban Mobility Initiative (TUMI), for example, showed that coronavirus measures in the capital, Abuja, which included reducing bus capacity and suspending Uber services, resulted in transport becoming increasingly expensive and restricted, leaving some passengers stranded and vulnerable — women in particular.

TUMI, a global sustainable mobility group which includes Germany's agency for international cooperation, GIZ, has been sharing COVID-related city interventions on its platform. Armin Wagner, a senior transport policy adviser with GIZ, gave the example of Singra, Bangladesh, where electric rickshaws were brought in as part of an "emergency action plan" to fill the gap left by public transport.

"In times of social distancing, these vehicles have been deployed to supply much-needed food to the public as part of the 'home delivery system' in Singra. This enables people to avoid unnecessary trips but safeguards their access to staple food products at the same time," he told DW. Wagner said TUMI is also supporting cycling development in places like Lviv, Ukraine, Hoi An, Vietnam and Addis Ababa, Ethiopia.

But crowded public transportation is still sometimes the only option. "We are seeing cities introduce physical distancing measures, both on public transit networks and informal minibus operations where stricter occupancy limits are being set," said Gunjan Parik, an urban planning expert at C40 Cities, a network of major world cities tackling climate change.

To keep people safe, she said, many cities were stepping up vehicle cleaning and disinfection, mandating face masks and providing hand sanitizer on buses, like in Cape Town, or setting up portable hand-washing facilities, such as those in the Rwandan capital, Kigali.

Parik pointed out, however, that fear of the virus could still keep people away, risking the future viability of these services. "It is inevitable that the fear factor of public transport will affect future demand," she said. And with many transport networks reliant on fares to fund operations, new infrastructure and maintenance, she said decreasing services could "[create] a vicious circle where demand falls further."

Mobility expert Van Gyzegem shares her concern, pointing out that shared mobility — cars, bikes and scooters, featured in Brussels' strategy — could also take a hit, with users fearing the risk of contamination. "Wouldn't people rather invest in their own bike or scooter, rather than use a shared device? None of these services were profitable before COVID-19 — how will they survive?" he said.

"A renewed focus on active mobility has to form a significant part of the recovery as economic activity increases in cities," said Parik. In a statement on May 7, a group of mayors with the C40 COVID-19 Recovery Task Force, representing 750 million people in cities on every continent, emphasized that initiatives linked to climate action — including funding public transport and expanding cycling networks — could "help accelerate economic recovery and enhance social equity."

"Our goal is to build a better, more sustainable, more resilient and fairer society out of the recovery from the COVID-19 crisis," said the statement, warning that the social and economic effects of the pandemic would be "felt for years to come."