The seven-day incidence of new coronavirus infections has exceeded the critical benchmark of 100. The significant rise in case numbers is likely to dominate top discussions on COVID-19 restrictions scheduled for Monday. 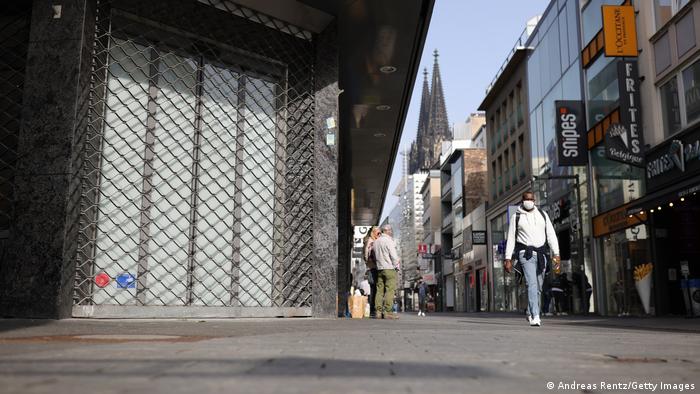 The number of new infections per 100,000 residents for the whole of Germany rose to 103.9 across the past even days, the Robert Koch Institute for infectious diseases said Sunday.

That figure exceeds the crucial 100 per 100,000 mark, which plays a key role in deciding the emergency brake mechanism for tightening lockdown rules that were recently eased.

Within one day, 13,733 new Corona infections were also reported on Sunday — up from 10,790 cases a week ago. The seven-day incidence was 79 a week ago. It recently rebounded after temporarily falling below 60 in February.

The AFP news agency on Sunday cited a document saying Chancellor Angela Merkel was seeking to extend coronavirus restrictions into April. The move would mean that steps towards easing lockdown are on hold for the time being.

The number of confirmed cases in Germany since the start of the pandemic increased  to 2,659,516, data from the Robert Koch Institute (RKI) for infectious diseases showed on Sunday. Fatalities rose by 99, bringing the total to 74,664, the tally showed.

Some parts of Germany have already revised their easing of lockdown after local incidence rates exceeded the 100 figure for several days.

Germany second-largest city Hamburg returned to a full lockdown on Friday after recording levels that peaked above 100 for four consecutive days.

The city of Cologne, in Germany's most populous state, North Rhine-Westphalia, imposed limited restrictions after its rates began to hover just above the 100 mark.

March 7 saw a significant easing of tough lockdown measures introduced across Germany in December. The 100 in 100,000 figure was viewed as central to decision-making on any emergency brake mechanism, at both a local and national level.

Appeal for new yardstick on lockdowns

Two German local government organizations on Sunday called for a more flexible benchmark to be applied when it comes to assessing coronavirus lockdown rules.

Association of German Cities President Burkhard Jung told the Funke Mediengruppe newspaper group that there was widespread dissatisfaction with pandemic policies at a local level. "I am worried that the coronavirus policy of the federal and state governments is losing support on the ground — even among the mayors," Jung said.

"We should introduce a new coronavirus indicator that also looks at the vaccination rate, the burden of the intensive care units and case mortality."

The assessment was shared by the German Association of Towns and Municipalities, whose chief executive Gerd Landsberg told the Welt am Sonntag newspaper that measures should apply to clearly identifiable hotspots.

Cultural venues want to be able to plan their safe reopening. Berlin is holding a series of events to develop a new strategy: Tickets come with a COVID test.