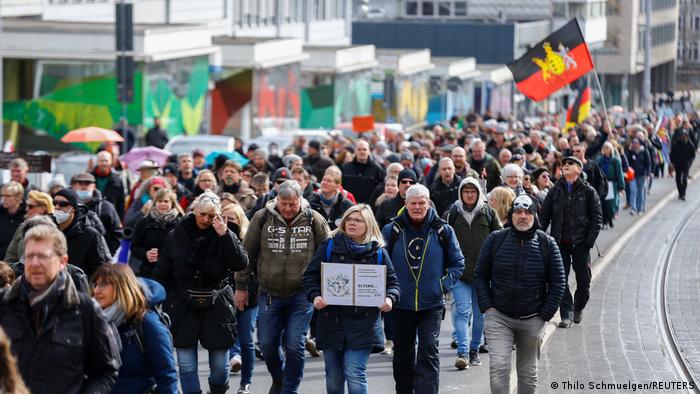 Protesters attacked several members of Germany's security forces in the central city of Kassel, authorities said on Saturday, as over 20,000 people took to the streets to decry the anti-pandemic lockdown.

"We will not tolerate such attacks," local police said on Twitter.

Violent clashes between various groups of protesters were also reported.

Reporting from the scene, DW's Benjamin Alvarez said that the rally was allowed to continue despite numerous violations of the coronavirus guidelines.

"Protests are officially over, but there are a lot of people in the city center," he said.

Live footage from the inner city showed demonstrators facing off with a large contingent of police in riot gear. Many protesters were chanting "Wir sind das Volk" ("We are the people"), a slogan taken from the peaceful protests that led to the end of communist East Germany in 1989. 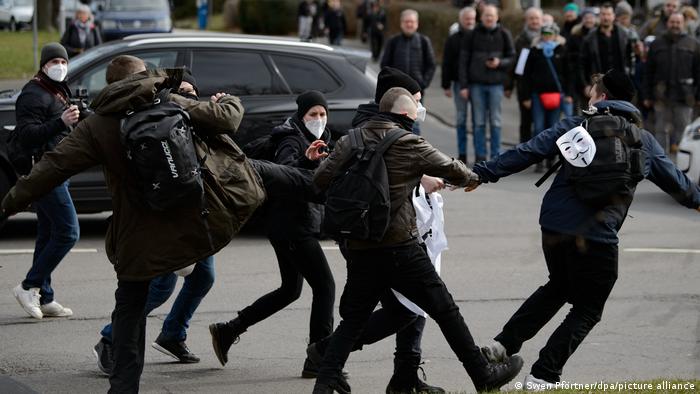 A number of scuffles were reported at the demonstration

Some protesters tried to break through a police barrier, and a water cannon had been used to disperse some demonstrators outside the area authorized for the rally. Police have also warned that the demonstration will be broken up if participants refuse to obey rules on wearing masks and social distancing.

Our DW correspondent also confirmed hearing that police used water cannon, but said it was due to two groups of protesters clashing away from the main rally site.

Despite lockdown restrictions, crowds were tightly packed together.

Police said they had used mace and batons in scuffles with protesters.

DPA news agency reported that several reporters were attacked, as has frequently occurred at coronavirus denial protests, where many participants are hostile to mainstream media.

The protest has been co-organized by the Querdenken (Lateral Thinking) movement, a group that has been behind many such demonstrations during the pandemic. 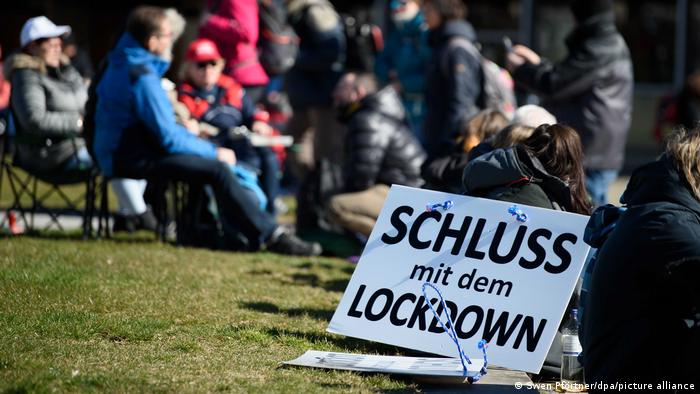 Protesters want an 'end to the lockdown'

The demonstrations are considered by experts to have considerable potential as superspreader events. One study conducted by the ZEW economic institute in Mannheim and the Humboldt University in Bonn concluded that two demonstrations in Leipzig and Berlin in November caused many thousands of infections.

German authorities have also been looking into links between the Querdenken scene and far-right elements, particularly after an incident last year in which the Reichstag in Berlin was rushed by a group of demonstrators from a coronavirus deniers' protest.

Other rallies were planned in Berlin and Munich on Saturday. In the capital, only some 500 people were reported to have turned up and were massively outnumbered by a 1,800-strong police contingent, according to the Associated Press.

Germany is officially in the grip of a third wave of the pandemic, with more than 16,000 new infections reported on Saturday.

Police reported at least 1,000 violations during an anti-lockdown protest in Stuttgart, attended by many COVID-deniers. Meanwhile, Israel has lifted its outdoor face mask requirement. Follow DW for the latest.