Germany′s coronavirus skeptics: Tactics from the Middle Ages | Germany | News and in-depth reporting from Berlin and beyond | DW | 03.10.2020 Michael Blume is a political scientist and serves as anti-Semitism commissioner for the government of Baden-Württemberg, the state where Germany's anti-lockdown movement "Querdenken 711" ("lateral thinking 711") was born. He has called for people to stand up against the protesters.

DW: What makes the protest movement so symptomatic for our time?

Here in Stuttgart, a protest culture is emerging under the slogan: "Us against those up there," in my opinion most comparable to the yellow vests in France. People take to the streets to say: "You in the faraway center of power, you in Berlin, you neglect us. You make fun of us, you judge us, and now we are defending ourselves."

These are classic populist movements, in which the belief prevails that the "center of power" can be conquered and "cleaned up" from the provinces.

As a movement, one can claim that one wants to reflect a broad front of society. But from the very beginning, they have also tolerated problematic speakers and statements. They promoted speakers who denied the Holocaust and claimed that the pandemic was only staged by the government and was a conspiracy. 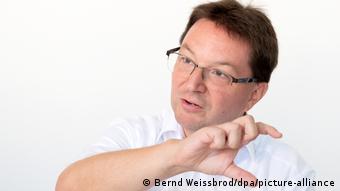 So you're not surprised about some of the statements being spread in these demonstrations?

Yes, it's always been like that. Whenever a pandemic has occurred in history, we have had two possibilities. Either we face the fear and uncertainty and inform ourselves, while living with the fact that we don't have any ready answers. For example, we do not know when the vaccine will be available. And the other option is simply to block it out: I don't accept the fear, I look for a group to blame. All I have to do is shout at them and go out into the street. And then everything is supposed to be fine.

Many of these conspiracy myths already existed in the 15th to 19th centuries. Sometimes it even gets a bit boring, because they are always the same building pieces. People demonstrate together, whether they are left, center, or right, but what connects them is their image of the common enemy. And that is the important thing: People are so fixated in their fears that it is not even creative. They never come up with a Brazilian world conspiracy or a world conspiracy of Quakers or the Muslim Brotherhood. It's always, always, always Jews and women behind it.

I'm thinking of the adrenochrome myth that comes from the US. This claims that Jews and Democrats torture children and extract adrenochrome from them. This myth actually originated here in southern Germany in the 15th century. At that time, Jews and women were accused of jointly observing the Witches' Sabbath and extracting witch ointment from children, a substance that makes them fly. So it is a conspiracy myth that is now reappearing through digitalization, just as it did then with ink printing.

Why are myths spreading today that were considered beyond reason just a few years ago?

I often hear people say: "Funny, five years ago you could talk to my uncle just fine. He was actually a fun-loving guy, and now he's muttering something about how the Rothschilds financed Bill Gates." And now people are being triggered by the internet. In Telegram, WhatsApp, and other chat groups, a normalization is happening that would not otherwise be possible. So anti-Semitism literally becomes acceptable again. We have cases where people change their minds very negatively within two or three months.

What can you do to get people back into the discourse?

The crucial thing is to intervene as early as possible. If someone is stuck in there for five, 10, 20 years, then it becomes more and more difficult. That is why we are expanding our consulting services. We make sure that we try education, pedagogy, and discussions. And in the second step, we really do develop the appropriate services, so that we intervene when things get too rough or when people endanger themselves or others.

There are many people who are demonstrating, but it's not the majority.

This interview was translated from German.

Germany's biggest cities have collected more than €3 million in penalties from violators of coronavirus restrictions. Munich and Hamburg, which have been hit hardest by the pandemic, have doled out the most fines.