Why the QAnon conspiracy theory is gaining popularity | World | Breaking news and perspectives from around the globe | DW | 27.09.2020 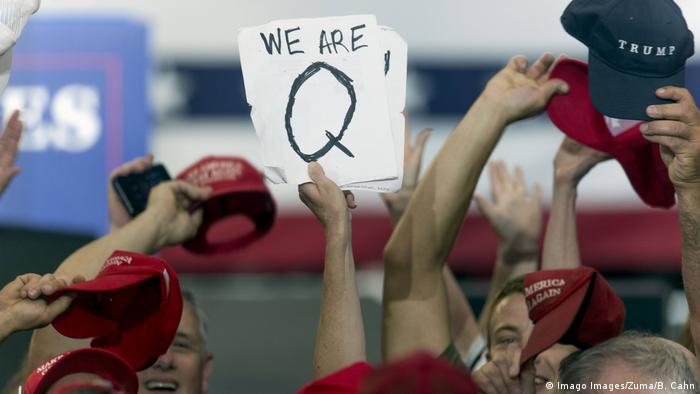 In recent days, thousands of protesters have gathered at London’s Trafalgar Square to express their anger at the British government’s measures to contain the coronavirus pandemic. Supporters of the QAnon conspiracy theory were among them. Some protesters were heard shouting "Choose your side," while others held placards reading "Liberty not fear" and "Stop child trafficking."

This last slogan is typical of QAnon adherents. The QAnon movement, born and bred on the internet, claims that an international pedophile elite has been secretly abducting and sexually abusing children, and harvesting their blood to make a youth serum. According to the theory, this global cabal includes the likes of Hillary Clinton and US investor George Soros, who are using this drug to control the world.

QAnon supporters think that these figures are part of a sort of secret government, the so-called deep state, controlling US and world politics. US President Donald Trump is seen as a savior, bent on fighting this evil "deep state."

These are the main tenets of the QAnon theory. It is, however, an amorphous edifice that keeps changing, sometimes overlapping with other  conspiracy myths, including anti-Semitic ones. "QAnon is like tofu; it can take on whatever flavor you add, depending on which ingredients you add," said Jakob Guhl of London's Institute of Strategic Dialogue (ISD).

Joining ranks with the alt-right

For example, QAnon adherents have recently united with protesters who believe government efforts to combat the COVID-19 pandemic are exaggerated, or that the virus is just a ploy to control the population through vaccinations. This could clearly be seen at demonstrations in several countries where QAnon supporters have marched side by side with anti-vaxxers, hippies and far-right extremists.

And indeed, the pandemic has lent further momentum to the QAnon movement, according to a recent ISD study. It found a marked uptick in QAnon-related posts on Twitter, Facebook and Instagram between March and June this year. And the movement is gaining ground even outside of its place of birth, the United States. 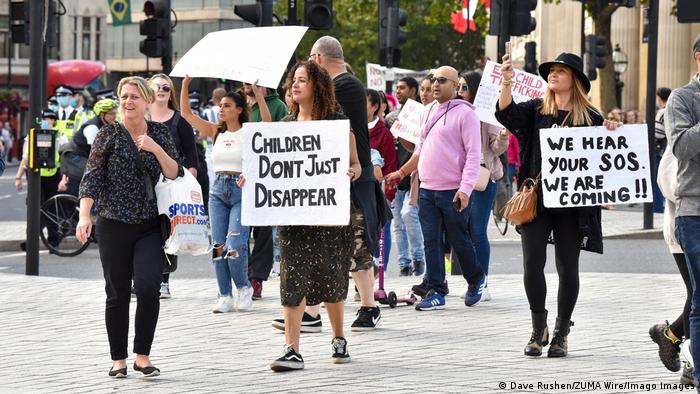 The UK is seeing a growing number of QAnon supporters

Many Brits are QAnon followers

"Even though most QAnon content is shared in the US, it is gaining an international following," said Guhl, adding that Britain has recently been the country where the second-largest amount of sharing takes place, followed by Canada, Australia and Germany. Guhl said QAnon's popularity in Germany is puzzling, given that most of the content is in English and focused on the US. But he said this could have to do with Germany's relatively active conspiracy theory scene and its Reichsbürger movement, which has certain commonalities with QAnon thinking.

Read more: Reichsbürger movement out to 'delegitimize the state'

During the coronavirus pandemic, German singer Xavier Naidoo and star chef Attila Hildmann have come out as celebrity QAnon disciples in Germany, sharing many of its baseless claims with their fans. Guhl estimates that Germany is home to several hundred thousand die-hard QAnon followers. But he believes that a much larger segment of the population is receptive to at least some of its claims.

QAnon got its start in October 2017, when an anonymous user called Q began spreading far-fetched theories on the 4chan messaging board. This user incorporated and built on the Pizzagate theory, which emerged during the 2016 US election campaign. This theory claimed that a child sex ring was operating out of a Washington D.C. pizza parlor and that Hillary Clinton was involved in these illicit activities.

The user, claiming to be a secret service operative with access to classified information, predicted Clinton's arrest. Even though this never happened, his or her cryptic messages grew increasingly popular. These days, Q's theories spread far and wide on the internet almost of their own accord, and can be found on various messaging boards, Telegram, Facebook, Twitter, Instagram and YouTube.

"QAnon functions like a meta-conspiracy theory," capable of integrating local narratives, said Guhl. This means the German Reichsbürger movement can draw on it, and Brexiteers can also take bits of it and fuse it with their own worldview. This explains why some QAnon sympathizers were present at pro-Brexit protests, with many of them believing that UK Prime Minister Boris Johnson is an ally of their savior, President Trump.

Internet expert Sascha Lobo, who writes a weekly column for German weekly Der Spiegel, said this amorphous quality is what makes QAnon "one of the most successful and dangerous conspiracy theories on the net today." He said this mix-and-match approach, akin to assembling Ikea furniture, means adherents develop a deeper connection to the theory in question — no matter how absurd or far-fetched its claims.

It's easy to mock the QAnon movement and dismiss it as a little more than a crackpot theory wafting about the internet. But its absurd claims have already made into real life. Not only are its supporters in evidence at anti-lockdown marches, Brexit rallies and protests against child abuse, but in 2019, when some QAnon followers planned and conducted violent acts, the FBI declared the movement a potential terrorist threat.

The man behind shootings in the German city of Hanau in February that killed 11 people left behind a pamphlet setting out his racist worldview. It also contained claims that a global secret service was controlling people, which somewhat reflects QAnon thinking – even though the perpetrator never explicitly referenced this theory.

While QAnon has already evidently made its way into the real, offline world and inspired acts of violence, things could get worse still. A number of QAnon sympathizers are currently running for office in the upcoming US Senate elections in November, said Guhl — Republican and independent candidates among them.

"These individuals genuinely believe a secret elite of pedophiles is out to topple Trump and could get elected and then have an influence on legislation," he warned.

This summer, Facebook and Twitter blocked a range of QAnon accounts. And last week, Germany's government commissioner on anti-Semitism, Felix Klein, urged messenger services to tackle the spread of this conspiracy theory.

Jakob Guhl agrees with these measures, yet also stressed that social media algorithms automatically promote controversial content such as conspiracy theories. He said users should be taught to critically evaluate social media content to combat the spread of misinformation. But that will not be an easy task, especially during a pandemic, when many people are experiencing an increase in existential fears.

This article has been translated from German by Benjamin Restle

The bizarre QAnon conspiracy theory has gained traction among US Republicans during the campaign. With the Democratic candidate dropping out, QAnon supporter Marjorie Taylor Greene seems set to win the Georgia district.