Cultural venues want to be able to plan their safe reopening. Berlin is holding a series of events to develop a new strategy: Tickets come with a COVID test. 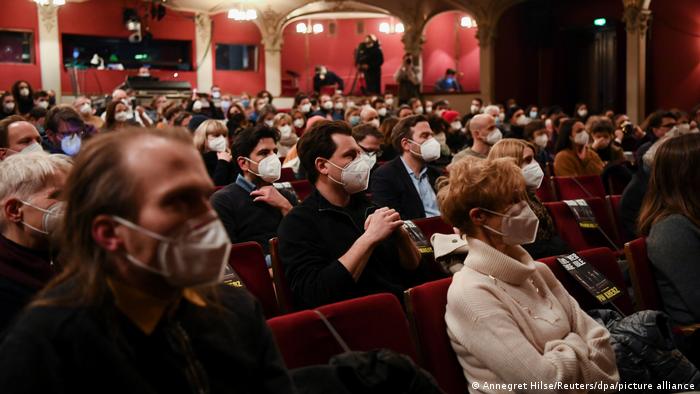 "It's like going to Berghain," — "But only worse!" joked two girls waiting in line in the freezing cold. "I've never been so excited to go to the theater in my entire life!" said another guy talking on the phone.

"We were in withdrawal," an older couple told DW when asked why they absolutely wanted to get tickets; they used to go to cultural events three or four times a month before the pandemic. Like many of the people waiting to get into the Berliner Ensemble theater on Friday night, the last time they had been to a live performance was around a year ago.

And as Germany enters its third wave of COVID infections, who knows how long it will take before we get to do this again, they added.

The unusual event was part of a new pilot study in Berlin, whose goal is to establish a strategy to safely reopen the city's concert and theater halls on a regular basis. 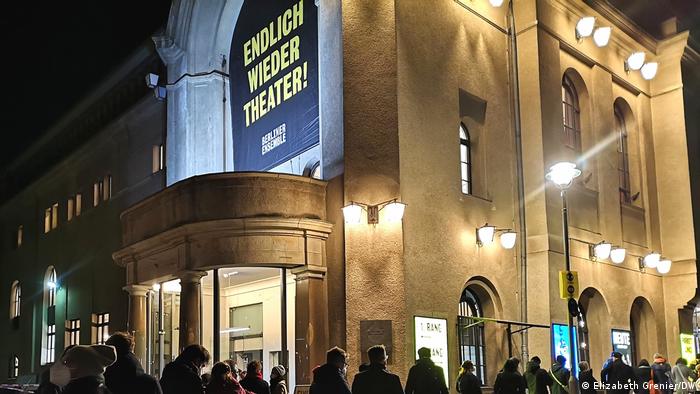 'Theater at last!' says the sign on the Berliner Ensemble

The pilot project, backed by Berlin's Culture Senator Klaus Lederer, includes a series of nine events, held at seven different venues, including theaters, opera houses, concert halls and even a club, from March 19 to April 4.

The Berliner Ensemble theater launched the test phase's first weekend, with two stage performances of Panikherz (Panic Heart), based on Benjamin von Stuckrad-Barre's autobiographical novel on drug abuse. "It's funny that they'd choose a story about destroying your health for the occasion," joked the author, who showed up on stage at the end of the performance.

Going to the theater in Berlin has always involved good planning skills. You need to determine your availability quite a while ahead of time, especially if you want to see a production with strong reviews; they're always quickly sold out.

According to the new plan, showing up for a last-minute theater ticket will definitely no longer be an option. It foresees that everyone who wants to attend a cultural event must get tested for COVID within 12 hours of the show; along with a personalized ticket, theatergoers need to present the official negative result along with their ID to be admitted. 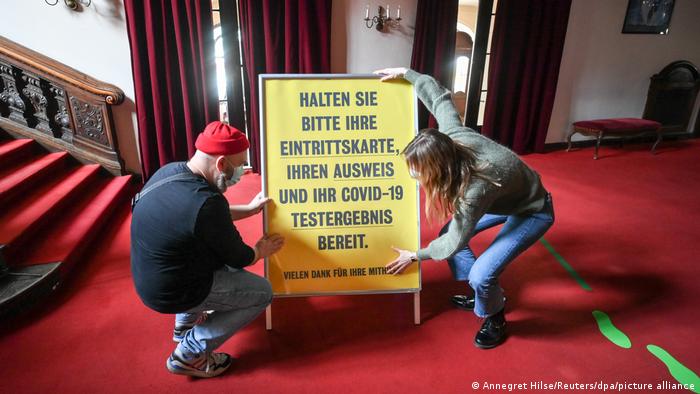 Instructions to get into the theater: 'Have your admission ticket, your ID and your COVID test result ready'

Even with the additional hurdle of getting tested before the event, the enthusiasm for the first weekend events was strong.

"People are yearning for culture," said the theater's director, Oliver Reese, before the performance began. "And you here tonight are all the best proof of this, as you were the ones who bought a ticket within the first four minutes — everything was sold out after that."

With a distanced seating arrangement leaving every second spot empty, the Berliner Ensemble now has a capacity of just 350; the 1,000 tickets for a Berlin Philharmonic concert directed by Kirill Petrenko, taking place the following day, were also sold out in a record time.

Getting tested was not a problem, different theatergoers before the event said. Some had even timed their appointment to pop into a testing center on their way to the theater. As everyone was being ushered in, one guy was still waiting for his results, which can be obtained through a QR code within a half hour following the test.

Admission ran smoothly, and the event started only seven minutes later than planned.

Not so long ago, it was sometimes difficult and expensive to get tested for COVID. It will now increasingly become a routine act for Berliners; since March 8, they can get an accredited COVID rapid test once a week, free of charge — and it's even officially recommended to do so. 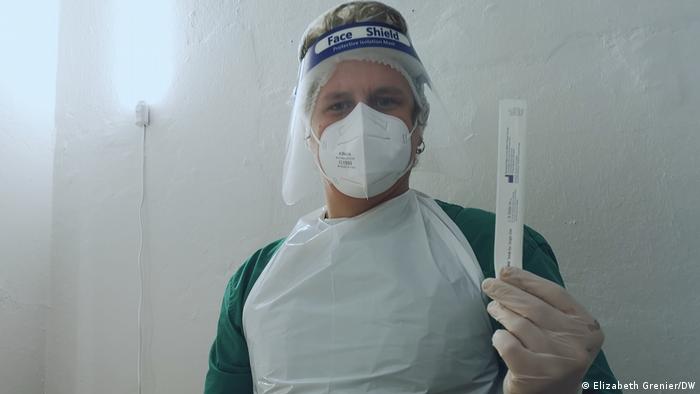 Until everyone is vaccinated, getting tested for COVID-19 will become part of many people's routine

The show must go on?

The pilot study starts as Germany enters a third wave of infections. Though the series of events for the project have not been canceled for now, the progressive easing of restrictions that had been planned at the beginning of March is being reconsidered.

The plan included allowing theaters to reopen if the incidence rate remained under 50 new infections per 100,000 residents per week for 14 days in a row.

For theater director Oliver Reese, that plan, which would keep everyone involved in a show on standby, is not very realistic; the objective of the pilot project is to be able to better plan ahead, while keeping everyone safe: "We can't make a theater schedule overnight," he said.

Concert halls and theaters have reacted creatively to the crisis with elaborate hygiene plans, yet their programs still had to be discarded several times in the past year.

Different scientific studies have found that the risk of infection was very limited for events in well-ventilated venues, with fixed and distanced seating — described as the "checkerboard" seating arrangement — and even more so with everyone wearing a medical mask throughout the performance and tested prior to the event.

The counter-argument is that people gathering for a performance automatically increase their contacts through, amongst other things, traveling to the venue, thereby increasing the risk of transmissions.

Still, there are other factors. "We need to get through this pandemic healthy, not only physically, but also psychologically. And I'm convinced that theater can be a very good instrument for that," said theater director Reese. 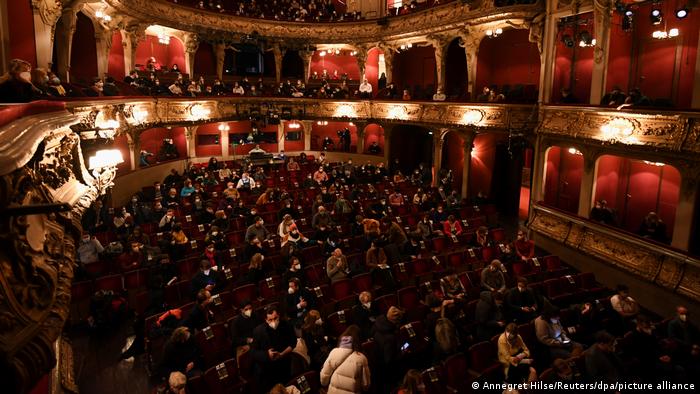 For most people, it had been a year since they hadn't been in the theater

Live performances obviously offer something live-streaming can't replace, and that was once again demonstrated by the Berliner Ensemble performers on Friday.

In one scene of the play — a class reunion — two of the actors started pointing at different people in the audience, humorously referring to them as if they were old classmates. The initial reactions were muffled, probably even more so because of the face masks. But the duo moved into improvisation mode, pushing the jokes until they managed to obtain genuine laughter from the crowd.

One of the actors even broke from his role for a second: "Oh man, it's so good to be at the theater again!" And everyone agreed in applause.

Carmen or Corona? Opera during the pandemic

Theaters and cinemas followed strict rules under the pandemic, but are being forced to close yet again under Germany's partial lockdown. Shocked and angry, artists have demanded immediate aid.

From drive-in concerts to beer deliveries, Carnival organizers are finding creative ways to celebrate despite the COVID pandemic.