Berlin in Petrenko fever: His inaugural concert with the Berlin Philharmonic | Music | DW | 24.08.2019 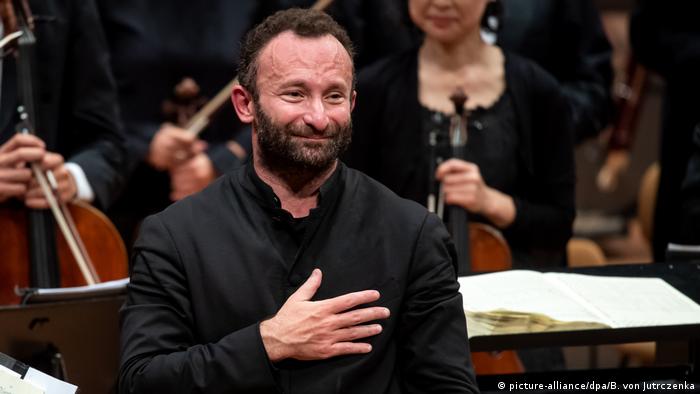 Those questions came to mind while experiencing Kirill Petrenko's first appearance as principal conductor of the Berlin Philharmonic. And were answered.

Read more: Back to the basics with Petrenko

The iconic Berlin Philharmonie shook to the performance of Beethoven's Ninth Symphony, and one could feel the tremors in far-off Bonn, where this author watched the transmission in a movie theater. Getting a ticket for the concert in Berlin was impossible, but that was a blessing in disguise: In the theater, one could watch the musical process up close.

Back to the beginning: In 2015, the Berlin Philharmonic — one musician, one vote — elected the now 47-year-old Austrian, born in Siberia, to be the seventh principal conductor in the orchestra's 137-year history. Only seven principals in 137 years points to a long history for each individual one. 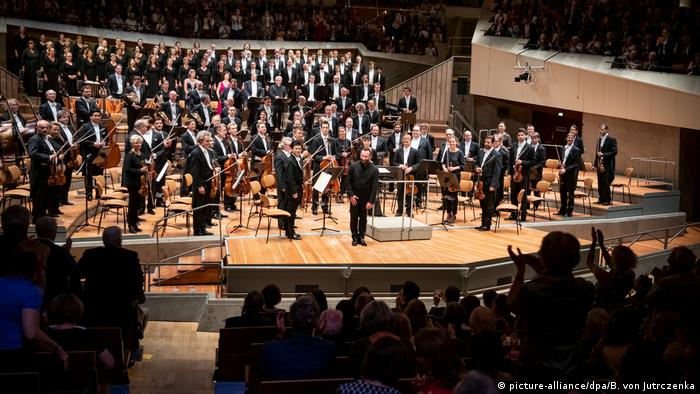 All dressed in black, except for the mezzo-soprano — she wore red

Pre-election, the Berliners had experienced Petrenko only a few times, and post-election there were only four joint performances. In the season to come, Petrenko graces the playbills only six times — in contrast to his omnipresent predecessor, Simon Rattle. The reason? Until the end of 2020, Petrenko remains under contract with the Bavarian State Opera and will commute from Munich to Berlin and back.

So his inaugural performance was all the more hotly anticipated. It began with Symphonic Pieces from the opera "Lulu" by Alban Berg. A riddle of a work from the year 1934: highly modern, atonal.

With 100 energetic musicians onstage, one had the impression that the conductor was working harder than the rest together. Veins pulsed in his forehead, and long before the main work of the evening, he was working up a sweat.

Petrenko's philosophy? "We have to see what we can achieve with our modest means," said the maestro in a pre-concert interview. Modest means? The Berlin Philharmonic is considered one of the world's most-renowned orchestras. Some even say: the most-renowned.

Was the conductor playing down the group or its members' abilities? Hardly. "There are not just 130 musicians sitting there," says cello chair Olaf Maninger. "The orchestra's whole history is sitting there. And he brings along the respect for that into his official function."

The remark about "modest means" can have been made by Petrenko only in relation to something much greater: a work of music, something that can be only approached and never fully revealed. 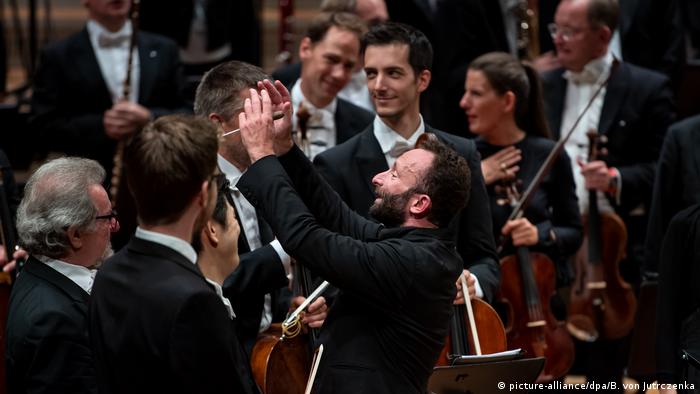 All the more so with a often-heard piece like Beethoven's Symphony No. 9, which had also been important to his predecessors Hans von Bülow, Artur Nikisch, Wilhelm Furtwängler, Herbert von Karajan, Claudio Abbado and Simon Rattle. When conducting it, every nerve, every fiber in Kirill Petrenko's body seems infused with music. He drives the musicians with expansive, energetic gestures, yet seems to conduct most of all with his eyes. In close-ups, those expressions are intriguing, ranging from desperation to jubilation, from wild to crazy — and culminating again and again in an ecstatic grin.

Read more: all about Deutsche Grammophon

Sometimes Petrenko seems to beseech, to implore his musicians with his body language. He often even seems to stand at the edge of a precipice, as though only his last reserves of energy and those of his fellow musicians could prevent the fall.

The exertion is echoed in the faces of the instrumentalists. They, too, play as though their lives depend on it. 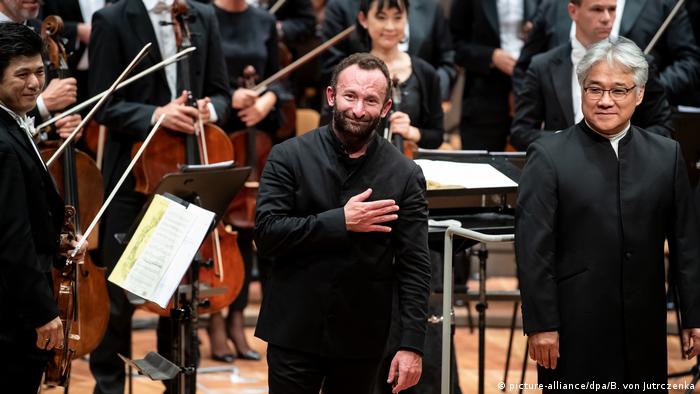 Yet in conversation, the conductor seems quiet and modest, anything but a commanding presence. In an interview with cellist Olaf Maninger, he mostly avoids eye contact and speaks in a quiet tenor and with a thick Russian accent, as though embarrassed to be speaking at all. One understands why Petrenko rarely gives interviews. But the message is clear: "A concert like this comes only once in a lifetime. Yet the pressure is incredible. I couldn't wait for the day to pass. I wanted it to be evening right away."

And about the point of departure for the new relationship: "I had the feeling that the musicians are ready to honestly follow my intention. And so I want to give them some kind of confirmation, to say: 'Yes, I'm the one!'"

No megalomaniac at the podium

The American Matthew Hunter, a member of the Berlin Philharmonic since 1996, explains what Petrenko's modesty means in terms of music-making: "You don't have to have a big ego onstage. In fact, it probably gets in the way of achieving musical aims. So you can be modest and still have the maximum musical authority."

And the results? Beethoven's Ninth was rendered with momentum, passion — and meaning. A work that has to withstand performances at every kind of official celebration sounded fresh, as though heard for the first or only time. Timpani player Rainer Seegers describes the experience, saying: "You take the maximum risk. But then you have the chance that something comes about that can never be repeated."

Gazing into the crystal ball

What's to be expected in the Petrenko era of the Berlin Philharmonic Orchestra? Matthew Hunter gives a hint: "I can't predict how Kirill Petrenko will develop our sound in the next five or 10 years. But I would say we're returning to something in our sound. The sound is in us, and it will be in the air."

Rainer Seegers adds, "Something is returning, something that was there ages ago with Karajan. Restoring the unmistakable sound of the Berlin Philharmonic: I think that's his secret goal or wish." 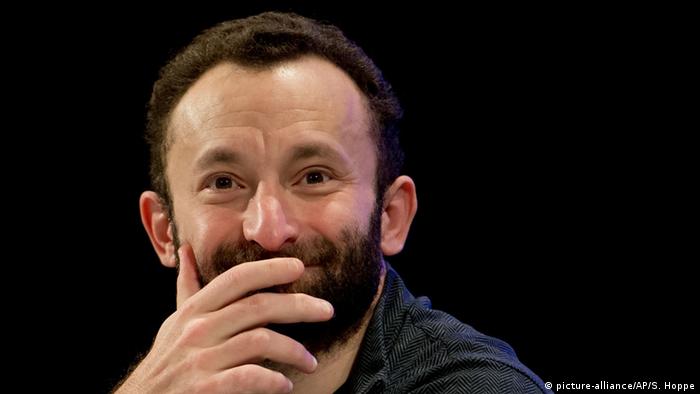 Just what does he have in mind?

For the moment, it's more of a honeymoon feeling between maestro and orchestra. The program is to be repeated outdoors on August 24 in front of the Brandenburg Gate for an audience of up to 32,000, with transmission onto an LED screen, to television and to the Berlin Philharmonic's Digital Concert Hall. The program begins at 8:00 p.m. CET.

But what was the last thing heard the night before? Ovations, curtain calls, flowers, bows, hugs: the usual ritual — but the ovations wouldn't subside. One felt the applause could have gone on for half an hour, had the chorus and orchestra not stood up and walked out. Then the auditorium thinned out, too, but the clapping and cheering continued until Kirill Petrenko appeared again on the now empty stage and bowed to the remaining audience members as though to say, "Yes, I'm the one!"

The stage direction a provocation, the music a revelation - and then there's the requisite scandal, says Rick Fulker. The Castorf-Petrenko "Ring" will fan the flames of discussion for some time. (01.08.2013)

Stage director Frank Castorf is always good for a surprise, says Rick Fulker after "Siegfried" in Wagner's "Ring" cycle. Following Route 66 and Azerbaijan, it's off to the communist Eastern Bloc in "Siegfried." (30.07.2013)