The world's oldest recording label is celebrating its 120th anniversary on November 6 with a concert in the Berlin Philharmonie. A glance back at how the "yellow label" wrote music history.

Founded in December 1898 in Hanover, the recording company known worldwide by its German name, Deutsche Grammophon (DG), is as old as the recording industry itself. The founders were the American Emil Berliner — born in Hanover and the inventor of the shellac disk and the gramophone — and his brother Josef. Berliner's disk was a further development of the cylinder that had been patented by Thomas Edison.

The music world was quick to pick up on the new technology: As early as 1902, the great Italian tenor Enrico Caruso was singing into a horn to have his voice captured for posterity. Many more followed. By 1907, the record factory in Hanover had 200 record pressing machines.

Many names, one tradition

In the decades to follow, many names were associated with Deutsche Grammophon: the Gramophone Company, Polydor, Siemens & Halske, Telefunken, Archiv Produktionen, Polygram. The company was affiliated with some, founded others and was taken over by yet others. Today Deutsche Grammophon belongs to the Universal Music Group, but the label's original name remains, as does its sometimes decades-long relationships with artists. 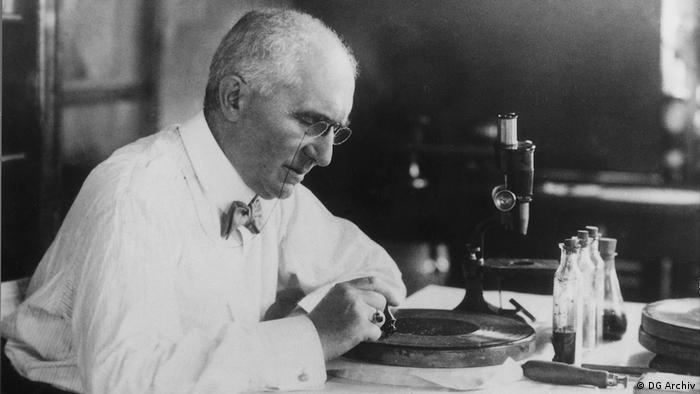 The founder of the company, inventor Emil Berliner

In 1913 came the first complete recording of an orchestral work: Ludwig van Beethoven's Fifth Symphony was released on four disks, both sides recorded, with Arthur Nikisch conducting the Berlin Philharmonic.

Two world wars led to bitter setbacks in the company's history. During World War I, DG was separated from its affiliate, the Gramophone Company in England, and the allies banned its recordings from export.

Before World War II, Nazi policies resulted not only in the banning of Jewish artists but also the destruction of countless of their recordings: an irretrievable loss for music history.

The iconic yellow label came only in the postwar era. DG had to reinvent itself, and it did, by gathering some of the greatest names in the business, such as the conductors Herbert von Karajan, Karl Böhm and Wilhelm Furtwängler and the singer Dietrich Fischer-Dieskau, to name but a few. The returns from the big names enabled the company to pursue other activities, such as on the sub-label "Archiv Produktion," whose recordings of baroque music were appreciated worldwide.

The development of the Compact Disc in the early 1980s led to an upswing in the recording industry's fortunes. After having reached saturation, the market was eager for the new technology, and many older releases were digitally remastered.

The company has responded to wide-reaching transformation in the digital age, placing its recordings on streaming services including Apple Music and Amazon. 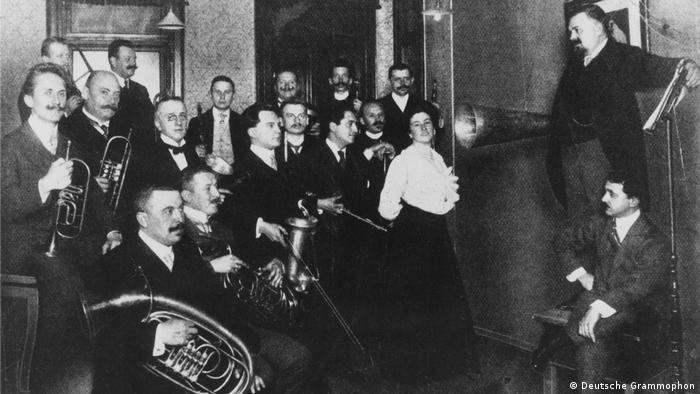 Deutsche Grammophon's president Clemens Trautmann sees "in the confusing variety of available music experiences in the digital age, a need for enduring values and orientation, which is leading to a renaissance of classical music."

That does not exclude new genres or performance venues, such as neo-classical music or the "classical lounge," where serious artists perform in relaxed club settings, their performances streamed live.

In general, says Trautmann, the trend today is towards individualistic and unique musical renditions — and the boundaries between the media are becoming fluid. Musicians now disseminate their artistry via multiple media channels, including the social media. Thus there's a good chance that the "yellow label" will be around for some time to come.

Including a 120th anniversary celebration at the Berlin Philharmonie on November 6, the "Yellow Label" is marking the date with a year-long series of commemorative events that began with a gala in Peking's "Forbidden City" on October 10. Additional special events are scheduled for December 6 in Seoul, January 19 in Hamburg, April 9 in Hanover and May 1 in London.

Changing tides at the Berlin Philharmonic

Countdown to the election on May 11: who will be the one to lead the world-famous orchestra? Nothing has been decided yet, but knowing the tradition of the Berlin Philharmonic helps in the guessing game. (05.05.2015)

Hipgnosis: the studio that turned album covers into art

One of the reasons vinyl records are still so popular is that it's a great format for cover art. The British graphic design studio Hipgnosis were the visual pioneers of the progressive rock scene in the 1970s. (28.09.2018)

The Japanese tech giant stopped making vinyl records in 1989, with cassettes and compact discs dominating the market at that time. But the format's renaissance has led Sony to return it to the market. (29.06.2017)

80 Years of the Tape Recorder